THERE ARE NON-CHINESE who can eat Chinese food with gusto three times a day. Like me. For breakfast, what could beat foo yung, that wonderful Chinese version of an omelet, with coral-colored morsels of shrimp pebbling its golden surface? For lunch, what could be better than soo gai, which is tender white chicken breast with a covering of batter fried to crisp brown perfection and sprinkled with crushed almonds? And for dinner, if you really want a feast, I suggest:

EGG ROLLS AND CHICKEN ROLLS, the first being a form of pastry filled with chopped meat, shellfish and vegetables, and the second being slices of chicken wrapped around spicy Chinese bacon and sizzled in peanut and sesame oil.

WON TON WITH PUNGENT SAUCE, '['his is the Chinese equivalent of Italian ravioli or Jewish knisltes, and is a thin dough wrapped around a stuffing of spiced meat. While the Italians boil ravioli, and the Jews bake knisltes, the Chinese deep-fry won ton golden brown and give you a magnificent sauce to dunk it in.

BEEF WITH SNOW PEAS — thin strips of tenderloin fried with delicate snow peas, Chinese mushrooms (the dried kind that have to be soaked), water chestnuts and bamboo shoots.

TA I DOP VOY. which is the sort of chop suey Chinese make for themselves with shrimps, barbecued pork, broccoli, celery, water chestnuts, mushrooms, bamboo shoots and magnificent gravy, and doesn’t have a single bean sprout in it.

ALMOND COOKIES, which are delicious, and good-luck cookies, which are less delicious but encase paper slips on which your fortune is printed.

I haven’t mentioned fluffy steamed rice and Chinese tea. They, of course, must accompany every Chinese meal, and unless you indicate that you want to start with a cocktail, a self-respecting Chinese restaurant puts the teapot on the table before you order your food.

Chinese cookery is a skill, an art. a mystery — and the poetry of the fry pan. The fry pan, in this case, is cast iron, semispherical in shape, and called a kno. The choicest recipes are described as “honorable.” And in what other cookery would you find names like “egg flower soup,” “eight precious melon bowl,” “drunken chicken” and “lady in cabbage”? In what other cookery, for that matter, are contrasts of texture, a roughtextured ingredient to balance a smooth one. added to such contrasts in taste as sweet and sour?

There are, indeed, those who say the Chinese alone can prepare Chinese food. This is not quite true. Once, when my wife asked the waitress to convey her compliments to the “Chinese chef,” after an excellent Chinese meal in a Quebec restaurant, the waitress giggled and announced that the chef was a French girl.

But Chinese cookery, let’s face it. is not simple. Much that goes into it has to be laboriously chopped with cleavers — some items chopped so thoroughly they are minced. A Chinese chef wields two cleavers, one in each hand, drumming them against an enormous soap-tree chopping board. He works at high speed, he stirs the contents of his kno at high speed, over a high heat, and he whirls around his kitchen like a man simultaneously juggling and ballet dancing. But, if you feel up to it. there are several first - rate Chinese cook books you can dip into. Three I’ve found helpful — I've stuck cautiously to the easiest-to-make dishes — are 100 Most Honorable Chinese Recipes, by Yu Wen Mei and Charlotte Adams (Ambassador Books Limited, $7.50), The Art of Chinese Cooking, by Mimi Ouei (Random House of Canada Limited, $4.95), and The Chinese Cook Book, by Wallace Yee Hong (Ambassador Books Limited, $3.95).

They spell out how Chinese cooking is done, as accurately as such books can. but you have to remember that the Chinese chef is an individualist, that he improvises as he cooks, that no two prepare the same dish the same way. By all means read these books, and others, if you aspire to cook Chinese style. And you might have a session with a friendly Chinese chef, as I did at Toronto's Sea-hi Restaurant. Here are two of his trade secrets:

soo GAI: Divide a plump chicken breast into three slices, dip in flour, egg-and-water batter (not too thick), and deep-fry. Section them with cleaver, top with crushed almonds and serve with water, soy-and-cornstarch gravy seasoned with salt and, if you v/ish. ginger or sherry or both. 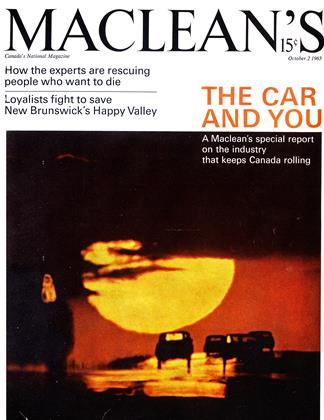