THE OFFBEAT NAGS IN THE NOV. 8 RACE SUSAN DEXTER November 1 1965

Among the same old grey mares at the gate: a cop, a halfback, a wrestler

WITH SOME 900 Canadians sallying forth to contest the 265 seats in the federal House of Commons, an optimistic democrat would hope to find every facet of our national life represented in the field. Unfortunately, election after election, the runners lining up at the starting gate all seem to come from the same stable and all seem to be wearing the same drab businessman’s or lawyer's basic grey. Only rarely does a horse of a different color — a hockey player or a used-car salesman — prance forth to add a splash of variety. This year is no better than most. But, happily, it’s no worse either. For instance, if you have hockey players in parliament, why not professional wrestlers too? And if used-car salesmen can make it, why not municipal police chiefs?

The chief is 61-year-old Robert Taft who is challenging NDP incumbent David Orlikow in Winnipeg North. It’s a riding which has returned 10 CCF, NDP or Labor members in the last 12 elections, but Taft feels that Orlikow’s 2,431-vote majority out of nearly 51.000 votes cast in 1963 is not insurmountable.

In addition, however, the riding which Taft selected is a breeding ground for lawbreakers. It also has a large ethnic population, mainly Ukrainian, who according to a local alderman “fear and hate the police because they're the representatives of tyranny and of the establishment.” Taft, naturally, feels differently: he worked the north-end beat as a cop, and when he was chief, attended more teas in Winnipeg North than in any other area of the city.

Taft resigned his post as police chief despite a police commission decision conveniently made 10 months ago which would have allowed him to campaign and return to his job if defeated. He says simply that he’s playing for keeps.

In Toronto’s York East, Whipper Billy Watson, a good guy of the wrestling ring, and a Progressive Conservative, has begun to muscle in on Steven Otto, the sitting Liberal. Within days of his nomination, Watson was challenged to an arm-wrestling match followed by a policy debate. His challenger wasn’t Otto — it was Charles Templeton, who after his defeat for

the Ontario Liberal leadership has become a utility speaker (or challenger) for the Grits.

Here are some other offbeat candidates:

□ W. S. E. Morrison. 69, who retired after World War II from the Royal Canadian Navy with a rank of lieutenant-commander, is running Communist against David G roos who held the seat in 1963 by 1,538 votes. He was a career sailor, who decided to run as a Communist because he feels strongly about world peace and “the sell-out of Canadian resources to the U. S.”

□ Rev. Max De Hamel, a third cousin of Winston Churchill, is campaigning for the Liberals against Social Credit leader Robert Thompson in Red Deer. He is a United Church minister, born in Australia and educated in Scotland. He was captured at Dunkirk and held prisoner by the Nazis through World War II. The Germans were planning to execute him in 1945 when he escaped from a prison camp with the aid of a German army officer.

□ In Hamilton West, the Conservatives have nominated a 43-year-old Negro, Hamilton lawyer Lincoln Alexander. If elected he would be the first Negro member of the House of Commons. He will be up against Liberal Joseph Macaluso, who defeated Ellen Fairclough by 2,852 votes last time. 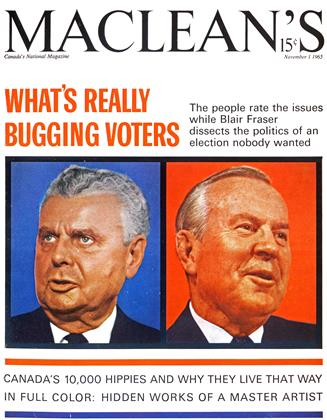