WHEN JOHN PIELECHATY, 25, arrived back in Toronto after a Florida honeymoon last December, he never expected that his next RCMP assignment would mean a voyage into the dopepushing underworlds of Toronto and Montreal. Pielechaty, who had been with the force four years, and Christo Sampson, 24, who had just finished his recruit training, had been selected by the Criminal Investigation Branch to act as undercover agents. They started in the two-bit marijuana racket on Toronto’s Spadina Avenue, and wound up, nine months later, making deals in the Montreal big-time.

Their qualifications were obvious: neither was known on the dope-squad beat; both were young and could protect one another, and both were small (Chris used to squelch questioning about being a stoolie by asking whether the suspicious person had ever seen a 120-pound horseman — in the lexicon of addicts, a horseman is an RCMP agent.)

The pair wore plain (but flashy) clothes, spent their days and nights in the greasy spoons drinking innumerable cups of coffee waiting for a score (a purchase). They hung around pool halls and bars, and on September 11, their masquerade still holding up, the RCMP net closed. The catch equaled the largest in the history of the force: 39 addicts and traffickers, including a man the force alleges is a Montreal kingpin and buddy of Lucien Rivard.

Marijuana was easy for the undercover horsemen to whiff out. Referred to well-known pushers and their hangouts by superior officers, they started making friends, and under the guise cf needing pot for two chicks, they began buying. They were vague about their backgrounds, but in a league where questioners are both suspect and unwelcome, their vagueness was accepted. It was also accepted that they wouldn’t divulge, other than a few hints, their occupations (in this case they labeled themselves “paper hangers” — phony cheque artists). Their story and affluence proved so impressive that one of their underworld contacts tried to persuade them to go into partnership with him.

Next came the bigger game — the goof-ball circles, the heroin suppliers and codeine traffickers. The two were on full expenses, so there was never any problem with cash. As each purchase was made the goods were immediately handed over to RCMP headquarters in downtown Toronto to be held as evidence. The pair had daily briefing sessions with other members of the force, usually in cars, and were

in constant touch with the office. (Pielechaty even managed to live at home with his new bride during the first five months of the investigation. Separation from his normal surroundings didn’t matter as much to Sampson, since he’s a bachelor.) In one case, their information enabled the force to nab two marijuana couriers at Windsor who were delivering a pound of pot — worth $200 to $400 from a big trafficker and retailing on the street for $1,000 to $1,500.

It was because the heroin, codeine and goof-hall supplies were haphazard and limited in Toronto that the force decided to send the two to Montreal — and the big fish. The move aroused no suspicions, since many other Toronto addicts were flying to Montreal for their own supplies and picking up enough ex:ra money by marketing some of the junk in Toronto to pay for their return plane fare.

However the two undercover men did have other worries. A new fad — taking the dangerously hallucinatory drug called LSD — was on the upswing. Many LSD users were playing practical jokes by throwing LSD-saturated sugar cubes into the coffee of unsuspecting persons. If the constables had taken the drug, they could have been in real trouble, since re-

actions to LSD are completely unpredictable. (Hence the pair were careful to watch what went into their coffee and though they never drank any LSD, they did manage to buy the first samples of the drug to fall into police hands.)

In May, they moved into the rooming house of an alleged Montreal trafficker. Their Toronto contacts vouched for them, so they eased quite quickly into the big-time—the world where traffickers never touch the stuff.

They claimed in testimony at a hearing in Montreal that they were regarded as apprentices in the big trade, and fatherly advice kept coming their way. “You’re just getting started," one man said to them.

Pielechaty testified that leading drug figures in Montreal had told him they were “afraid to do anything since they lost the last shipment and since Rivard’s arrest.” (Some $40 million worth of heroin was impounded some time ago by Montreal police from an Air France jetliner.) However, the two constables claim that by the end of August, they were able to pick up $5,000 worth of codeine—2.2 pounds: they said that they paid $3,500 down and gave a promissory note for $1.500. They testified the codeine was delivered in a shopping bag with a trading-stamp advertisement on the outside.

The constables were also lucky. At one time in Toronto, a female addict who was sweet on John told others that the two of them had “turned on” (taken heroin) together which meant he couldn’t possibly be a horseman. (This wasn’t true, since any evidence gathered while members of the force broke the law' might not stand up in

court.) On another occasion, when the addicts were getting suspicious again, the RCMP arranged for the Metro Toronto police to pick up John in one of the dope hangouts. They noisily arrested him on a fictitious warrant from the Oakville police force, and by the time John phoned a few hours later to ask Chris to pick him up, the heat was off—he was obviously on the wrong side of the law.

In Montreal, their initiation was simplified by a group of Toronto addicts who were trying to score with the Montreal traffickers. The addicts called on the constables to vouch for them, which they did. Later, the pair bought stuff from the Toronto users who were eventually arrested on trafficking charges.

All in all, nine months in the narcotics jungle was a pretty harrowing experience for the two constables. In Toronto, where most of the pushers are addicts themselves, it meant playing up to pimps and prostitutes (many of them Lesbians), watching young girls turn haggard overnight and living on the edge of the squalor and waiting and agony that is the addict’s daily existence. In Montreal it meant dealing with men who looked like successful insurance salesmen but who were really peddling slavery to a dirty intravenous needle.

Montreal-born Sampson, who is of Greek descent, has now been shifted from the drug squad to the investigation of immigration offenses. He is still, however, spending much of his time in the courtroom as the 39 cases come up for trial.

Pielechaty, whose usefulness as an undercover man would seem to be ended, continues to work with the 16man drug squad in the Toronto area. And surprisingly he will continue to be used in undercover work, according to his superiors. For one thing, they say, he now knows all the rules of the game and is even less likely to make mistakes. In their nine months in the field the pair became so adept at using terms like “H,” “garbage,” and “stuff” for heroin, as well as all the other addict jargon, that reporters covering the Montreal hearings coukl hardly believe they are really policemen.

The crackdown has made things pretty tough for the Toronto addicts who escaped the dragnet. The supplies have all but dried up, and it now takes far more pimping and prostituting than ever before to support the habit. Meanwhile the addicts arrested will spend incredibly painful months or years in jail. Only a very few of them will receive treatment for their addiction. By the time they are released there will almost certainly be a new network for them to hook themselves back into.

On this the RCMP has no illusions. “We haven’t won the war by any means,” says superintendent Joseph Downey, head of the Criminal Investigation Branch of Toronto’s “O” division. “The past shows there will always be ones to replace those who have fallen; it shows they invariably bounce back.” SUSAN DEXTER 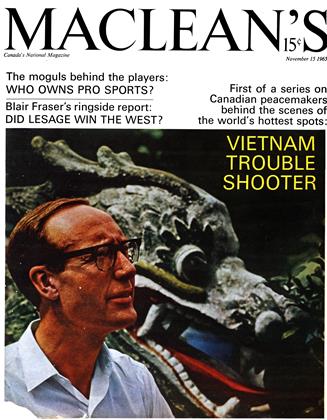