THE BOYS SPEAK only when spoken to, say, “Yes, sir,” and stand straight when a teacher or stranger enters the room. They wear a school uniform which is a variation on the school colors, black and gold, with red shirts and jeans for work. They sleep in a communal dormitory in steel bunk beds, four to a cubicle.

The boys, age 11 to 18, are students at what must be Canada’s most spartan private school. Britain’s Prince Charles need not have gone all the way to Australia in search of an outdoors-type education. Instead he could have gone to St. John’s Cathedral Boys’ School, north of Winnipeg near Selkirk. It lacks many facilities publicschool children very often take for granted: a gymnasium, a track, a swimming pool.

The 108 students use the Manitoba wilderness as their playground—paddling 1,000 miles along the routes of the fur traders or snowshoeing 50 miles up the Red River to Winnipeg.

The school was started in 1958 as a weekend study group by a few Winnipeg parents who thought their children were being mentally and physically coddled in public school. In 1962 it blossomed — with the blessings of the Anglican Archbishop of Rupert’s Land and Primate of Canada, Howard Clark, who hailed it as a “Christian experiment” — into a full-time school and is now in its third academic year.

St. John’s, housed in a ramshackle

old Indian sanitorium, is based on the Victorian ideal — muscular Christianity—of Thomas Arnold’s Rugby School translated into pioneer and voyageur terms. Underneath, the educational philosophy is Jesuit— learning without frills — although the religious philosophy is Anglican.

“The school is run like a construction camp building a power dam,” says teacher Ted Byfield, the school’s spokesman.

This construction camp, he explains runs on two basic principles—the Golden Rule and hard work for its own sake.

One rule is supreme: Do as you are told. If the boys disobey this, or one of hundreds of house rules, they are spanked (not caned).

Smoking is forbidden, but teachers say they would give the boys beer if it were not illegal.

Visitors often get the impression St. John’s is a boy’s monastery (there’s a church across the river) or a reform school. “People ask if all these boys are orphans or thieves,” says Byfield with a grin. Nearly 15 percent of the students have fathers earning over $15,000 a year. No one has a criminal background.

The reformatory image is left over from the 1950s when the building was the Manitoba Home for Girls. St. John’s took over in 1961. It is so tumbledown it looks Dickensian, like a giant anthill with boys coming out of every crack.

Each pupil pays an annual fee of about $820, less than half the cost at Winnipeg’s more conventional private school, St. John’s Ravenscourt.

The boys raise the rest of the $115,000 yearly budget themselves. One of the pigs in the backyard will feed the school for one and a half days. A dozen steers sold in frozen chunks will bring $8,000 and a barn full of 7,500 chickens will bring a profit of one dollar each when sold door-to-door in Winnipeg. The boys do all the housework and work in the kitchen under a cook.

St. John’s wants to teach its boys self-reliance. The teachers are critical of the public schools as philistine or-

ganizations teaching children to adjust to the conventional environment. “This leads to totalitarianism,” says Byfield.

Ironically, St. John’s demands pupils conform to its environment. Two-thirds of the boys come from Manitoba, the rest from across Canada. The maximum enrollment is about 100 and there is room for only a few new boys each fall. The school will not take anyone who looks like a misfit or a trouble-maker. About 10 boys leave each year because they don’t like it.

Parents and ministers of the Anglican church have severely criticized the school, not so much for its academic program but for the outdoor one. “They say we exhaust the boys physically and this is wrong,” says Byfield. “We think physical exhaustion to a purpose is good.”

Twelveand 13-year-old boys are sent on 18-mile snowshoe races in 20-below weather. They race in teams, and the rules are that the whole team has to finish. This way it isn’t easy for a boy to drop out; rather than let the side down, he keeps going until he literally drops.

“The only way to make leaders is to set an objective and work for it,” claims Byfield. “We push our boys hard—we want them to do great things in the world.”

St. John’s boys get about three time3 at much homework as public school students. Senior students speak French during their chores and read history texts in French. They have a special course in elementary logic designed to help them analyze “propaganda” from mass media.

Their history course emphasizes great men, beginning with Christ, with special attention to saints and martyrs. Two of the 13 canoes are named after Jesuit missionaries — Marquette and St. Jean de Brébeuf. Another is named for western explorer David Thompson.

One graduate, David Springbett, attends the University of Manitoba, working on the student newspaper. Of St. John’s Springbett says: “It was the only school that ever challenged me to do anything academically and physically. I enjoyed it.”

And even though everything about St. John’s is opposed to most of the ideas current in modern education, Winnipeg educators seem to be taking a wait-and-see attitude. R. J. Cochrane, chairman of the Manitoba Educational Research Council, likes the strong discipline aspect but notes: “They seem to be following the idea of the old English school — making men out of small boys while they’re still boys.”

The teachers are happy enough with St. John’s to think of opening two or three other schools—without the Anglo-Saxon image this one has. “Maybe we’ll call it St. Vladimir’s to attract the Ukrainians,” quips Byfield. “We are considered reactionary because we return to traditional principles,” he says. “But that is a radical thing to do today.” 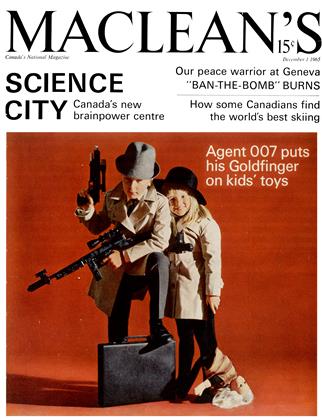