A YEAR AGO the Children’s Hospital in Akron, Ohio, installed a network of computers that handled everything from dispensing drugs, reminding nurses of medication schedules, making up the payroll during slack periods —and even playing tic-tac-toe with the staff during coffee breaks. The hospital officials hoped that freeing the staff from mountains of paperwork would mean that they could get down to the real business of a hospital: caring for the sick.

But then in January Maclean’s pub-

lished an article—The Machine That Puts The Nurses Back Into Nursing— which documented the hospital’s computer system. And ever since, the staff have been run off their feet, answering queries from all over the world and acting as tourist guides to the scores of visitors who “drop in to see how the system operates.”

“It’s becoming impossible for us to keep up with it,” says Charles Campbell, the assistant administrator, with understandable exasperation.

Because the IBM computers are still being put through a checking-out phase, the nurses are running the computers and doing everything they did before. (An extra staff of ten then cross-checks the computers’ work with the nurses’ conventional system.) And then there are the visitors. To keep up with it all the nurses have to work long hours of overtime. Nevertheless, Campbell feels staff morale is good. “They haven’t been ecstatic,” he says, “but at least they haven’t quit en masse.”

Campbell and his workers have been host to VIPs from all over the world, including a Japanese hospital director, an Israeli computer specialist hired by his government to study the Akron system, a Swedish cardiologist, an Australian government official, and others from Britain, West Germany, Mexico, and New Zealand.

With mingled pride and despair, Roger Sherman, the director of the 260-bed hospital, has consented to a high incidence of absenteeism by Campbell and other employees to accept urgent invitations to describe the automated hospital to conventions in Toronto, Vancouver, several parts of the U. S. and even in Europe.

In an attempt to organize the deluge of queries Campbell plans a seminar for April on the hospital’s computer operation. Even so, he had to limit

invitations to doctors and researchers whose work is directly linked to the use of computers in medicine.

“Everyone wants to come,” says Charles Campbell, “but a lot of them are automating for the glamour of automating. Sometimes I think we should just hire five million people and leave it at that.” An improbable solution. It’s also just as unlikely that Campbell will invite any journalists. 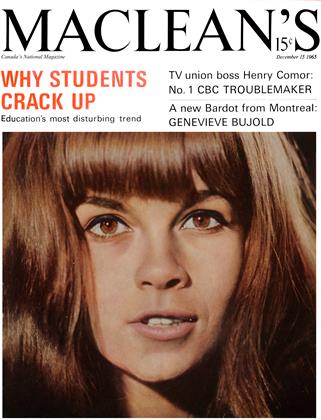