IT HAS BEEN SAID that if you want to come up with a novel which is sure to be a North American best-seller, all you have to do is write one about Abraham Lincoln’s doctor’s dog. In A Covenant With Death (McClelland & Stewart, $5.50), Stephen Becker mixes at least four even more predictably popular ingredients — murder, a murder trial, sex, and picturesque characters full of local color. To these attractions he has added an unfamiliar approach by having the story told by a judge intimately concerned in it, and an effective element of nostalgia by making the action take place in 1923. Nor is that all. The setting is a little town in an unspecified southwestern state which has overtones of Texas, and thus recalls certain aspects of Texan justice made sadly prominent by the assassination of President Kennedy. And there’s also a link with current reflections on justice in general, because A Covenant With Death raises the question whether the death penalty ought to be abolished.

This elaborate mixture of sure-fire themes suggests that Stephen Becker first decided on a formula he hoped would make him a lot of money and then wrote the novel accordingly; and he may well have done just that. If so, he hasn’t been disappointed, since among other things it’s a Bookof-the-Month Club choice. But Becker has the integrity of a good story-teller, a gift for narrative, a robust sense of humor and a warm willingness to take people as they are —all of which combine to make the book not merely profitable but valuable.

These qualities in Becker are reflected in the narrator of the story— Judge Lewis, seventy years old when he tells it but only twenty-nine in 1923, when a husband was charged with the murder of his beautiful young wife and so began the chain of events and conflicts and problems the judge tells about. The wife was no better than she should be, as they used to say in those days that now seem so far off. Neither was her husband. And neither was Judge Lewis, who never pretended to virtues he didn’t have, and never failed to recognize in others the force of temptations to which he himself yielded, or came close to yielding. As Becker presents him, Lewis is convincingly capable of taking himself seriously without being solemn or smug, of seeing the funny side even and particularly when it’s incongruous, and of enjoying the simple pleasures of life with wholehearted gusto.

Most of the other characters appear nearly or quite as human and forthright, although a few are so relentlessly colorful that the mind boggles at them. But the story as a whole is too interesting and diverting and moving to be spoiled by such occasional failures in part; and if you miss A Covenant With Death you’ll be missing a very good thing.

Also newly on the shelf:

* THE FRENCH - CANADIAN OUTLOOK: Mason Wade (Carleton Library paperback, $1.95). First published in 1946 and now reprinted. Authoritative and very readable. Because it helps so much to bring increasingly needed understanding, it’s more important than ever.

* THE GREAT CANADIAN LOVER: Mervyn J. Huston (Musson, $3.50). A collection of pieces which the author calls “commentaries and conceits.” They're clearly meant to be amusing, or penetrating — or both. Some of them are.

* THE JEALOUS GOD: John Braine (Ryerson, $4.50). An honest novel that shows how religious principles, harshly interpreted, can make love dirty and life a nightmare, and lead through pointless suffering to revolt.

* A LITTLE LEARNING: Evelyn Waugh (Ryerson, $6.50). In this first volume of his autobiography, Waugh appears variously as a snobbish prig and as the polar opposite, describing a vanished way of life. 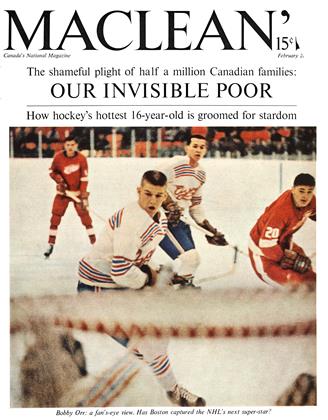