Last fall, in Our Double Image Of The North (Maclean’s, October 17) Blair Fraser told why a tour of the Canadian northland left him discouraged by present results of government policies intended to help Eskimos and Indians adjust to the impact of white civilization, and pessimistic about their future chances. But now Mrs. Jean Johnston of Mitchell, Ont., who has just spent two years on a Canada Council grant, studying frontier women of the north, has come back with a contrary impression. She is encouraged by what she saw among Eskimos and Indians, and optimistic about their prospects. Without questioning the validity of examples Fraser used to prove his point, Mrs. Johnston cites others to prove hers:

EDUCATION: Blair Fraser gives the example of two sons of an Eskimo family—one who had never been to school but was responsible and qualified to become head of the family; the other who was educated but considered lazy and good for nothing.

In contrast, there is the achieve-

ment of John Tetso, a Slavy Indian trapper in the Fort Simpson area. John went to school for three years and returned to the primitive bush life of his ancestors. He began describing his trapper’s life in a diary which was published monthly in The Catholic Voice. The articles were later published in a book, Trapping Is My Life. Tetso’s style is fresh and lively, his English grammatical. As an essayist, he puts most English-speaking people to shame. John’s son, Ernest, shows similar talent; he wrote the last chapter of his father’s book. When Ernest Tetso reached grade five, his father took him out of school. “It is time for him to learn the clues and tricks of survival in the woods ... I am for integration and progress but the change must be done gradually.” Another father of four I met sends two children to school one year, keeps tw'o at home to learn trapping, and, the following year, switches the pair. These arc just two of many examples I could cite of successful adjustment. INTEGRATION: When people criticize the present development of primitive peoples, as Blair Fraser did. they forget about the thousands who have already integrated—and are not often thought of as Indians and Eskimos. INDIAN WOMEN: Blair Fraser de-

scribes a girl who had gone “all through the education mill, and had then taken a job in Ottawa. After about a year away she was home again, with a nervous breakdown and an illegitimate child.” But at Fort Simpson, Hay River, Whitehorse and Dawson City, I met many pretty girls who had been educated in the local school or at Yellowknife who were only four or five years “out of the bush” but were doing excellent jobs as waitresses or clerks. In particular, I was impressed by the young Slavy wife of Orest Watsyk. high-school teacher at Fort Simpson. She had only a grade-six education and had come, a few years before, from a small Indian village, but her home

was as sparkling and modern as any suburban home in Ontario. TEACHING TECHNIQUES: Blair Fraser says: “The school suggests no

point of contact between what the children are learning and what they know already.” He notes there is need for research into the problem of educating primitive people. It is true there is need for such research. However, the federal schools (which of course arc for all children—Indian, Eskimo, white and Métis) have in most instances been open only four or five years. Their teachers have barely come to grips with the problem. Before 1958, education was carried on for almost a century by missionaries, who, though dedicated, were seldom trained teachers and had little money. Since some schools are now teaching not only academic subjects but also such practical subjects as woodworking, home economics, gardening, chicken-raising, it seems quite reasonable to hope that the children in class now will learn to improve their living standards, if not their job opportunities.

LIVING CONDITIONS: Blair Fraser says the gap between the generations is much wider “for those who leave their humble one-room houses or their tents and igloos, to live in the steamheated splendor of a new federal school.” It is true that many people feel some doubts about the “splendor” of the new hostels, yet how else are these children to be housed? As second-rate citizens? In the hostels they learn to enjoy cleanliness and the ways of white civilization, so that they can integrate. The Mother Superior of the hospital at Fort Simpson told me Indian mothers are now coming to the hospital from the bush to have their babies, and are learning better ways of feeding their families. Infant mortality has greatly decreased. SEGREGATION: Fraser refers to a “de facto segregation” and suggests there are “squalid” conditions in the nongovernment sections at newly built Inuvik. I have not been to Inuvik, so can not question this, but Inuvik is not the whole north. Fort Simpson has been largely rebuilt since a bad flood two years ago. I saw most of the homes of Fort Simpson from the outside, and I was inside quite a number, including many occupied by Indians. And yet I saw nothing that one could call either squalid or an example of “de facto segregation,” although I suppose there are dirty Indian and Eskimo homes just as there are dirty homes occupied by white people.

DEMORALIZATION: Fraser speaks of the “divisive demoralizing impact of education on a primitive society.”

I can think of many examples to refute this point, but three will suffice. An Indian girl, finding me a stranger at Hay River airport on my way to Fort Simpson, shepherded me with poise and charm through the uncertainties of arrival at a bush airfield and into Fort Simpson. In appearance, she was neat, well dressed, even elegant. I later found that she was

four or five years out of the bush, had reached grade ten, was a clerk at the Hudson's Bay store, that her parents could not speak English, that her father was steadily employed in Fort Simpson, and she was living with them.

One student in the arts-and-crafts course at Quetico National Park was an Indian girl from James Bay. Before she enrolled she had never been to school, couldn't even tell time, and was sulky and uncooperative. In three months she had not only become skilful at pottery making, but—in her teacher’s opinion — was thoroughly dependable.

Another pupil at Quetico was an uneducated Indian lumberman who had lost his legs in an accident. He began at the Quetico School knowing nothing about measurements, but after three months had turned out a beautiful hand-made cigar box. He was an adept and cheerful pupil.

My impression is that integration is much easier in the north where there are no reserves; that the Indians and Eskimos will quickly learn the new skills as job opportunities appear but that those who don’t integrate through intermarriage may take several generations to learn to “think” as whites and be able to stick at a job week in week out.

And I’m convinced the Indians and Eskimos will stop drinking when they have enough sports or entertainment to keep them occupied between work and sleep. 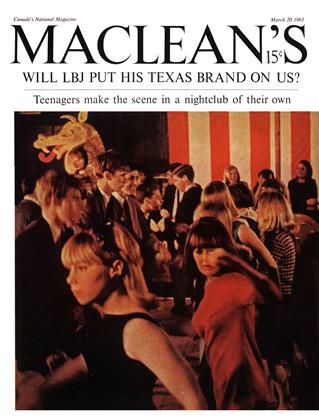