An apology / Help the poor help themselves / What’s wrong with guns?

I HAVE JUST finished perusing your magazine of February 20 and have noticed with astonishment the cartoon on page 4, headed “Pearson and Diefenbaker: Shades of World War I.” You have shown Mr. Diefenbaker in the uniform of the German Army, and I cannot understand how you can

suggest that he is other than the most loyal and fervent Canadian. You should know that he enlisted in the Canadian Army.

A. A. PETERS, STRASBOURG, SASK.

Maclean’s deeply regrets that the car-

toon could have been construed as derogatory to Mr. Diefenbaker, whose loyalty and devotion to his country are beyond question. We apologize to him and to any readers who, like Mr. Peters, may have read into the drawing a meaning that was wholly unintended.

Poverty: how do you fight it?

I congratulate Alan Phillips for his article, Our Invisible Poor (February 20). He has shown understanding, insight and compassion.

* Phillips implies that one fifth of our population is in want in spite of the four billion dollars we spend on welfare every year. Something must be done for these people — but not more welfare; that has ruined too many already. Instead of a pension plan and medicare, at an estimated cost of two billion a year, which many of us do not want anyway, the government should put into effect a sound rehabilitation program in these pockets of poverty, and it should include a birth-control plan.

* To keep Phillips up to date: only very small tractors can be bought for three thousand dollars; ten thousand is not at all uncommon out here. A combine would be about the same. He knows by now, of course, that the price of wheat has dropped.

* The federal government should set up job-retraining centres all across Canada. The rewards would he tremendous. Give these people the tools to assist themselves and they will do it. EDWARD E. SEYMOUR, GALT, ONT.

* I quote from the article: “ARDA is frustrated hy a lack of trained community-development officers, men with the patience and skill to work with poorly educated people without imposing their views upon them. ‘If we can train commandos in wartime,’ says Dick Hodges, ‘surely we can train community leaders!’ But as yet we have not a single training centre.” The last statement is not true. The Coady Institute of Antigonish, Nova Scotia, has heen training community leaders from all over the world for several years. Let’s take a page from the Communists and apply their tactics to the training of community leaders. Leadership is needed at the grassroots level. From every community, pick out the leaders — paying special attention to young people — and ship them to the Coady Institute for an intensive leadership course of four months. If the institute has been training community leaders for dozens of countries all over the world, surely its techniques must he worth examining as a solution for our challenging problem of poverty.

Thanks for Morley Callaghan's The Pleasure Of Failure (March 6). He shows great common sense and deep understanding of people. As a highschool teacher and writer, I would recommend his article to parents, youth, and teachers. As someone who

has been experiencing the “pleasures of failure" for many years. I can only say that Callaghan's advice works! ROBERT TOMPKINS. FORT SMITH. NWI

* Your cover blurb reads: “How

Failure Helped Me To Succeed." Who said Callaghan has succeeded?

* He is billed as a “famed author"; perhaps I have been missing something. as this is the first time I have

heard the name. I had somewhat the same experience but I did not look for a shoulder on which to cry. The alternative was to open markets in Euopean countries. There was no “pleasure" even in temporary failure. ALLEN ROY EVANS. VANCOUVER

Real sin is being caught

fie His Cabinet, Reports. February 6: Who is Blair Fraser (and all other news writers and commentators) trying to kid? It's time such people stop playing around with such empty camouflage words as “scandals, competence. bribe, drug-smuggling, scrupulous minority, malodorous reputation, errors of omission,” etc. The only reason there is ever any so-called public fuss about any such matters is that newsmen create and propagandize it. Let's face it: the average citizen knows damn well that very few people are all good or all bad and that most of us are good-bad. We also all know that “friendship" is the beginning of favoritism and that paying off a beneficial deed with the timehonored “bottle" is in essence no different I rom a two-thousand-dollar bribe. It all amounts to what we so conveniently and hypocritically call “cheating.” And it is, as in all such cases, not a matter of what is done or not done, but a matter of whether or not one is caught at doing or not doing it. - FREDERIC R. COTE, OTTAWA

Get your goat, Parker?

According to In The Editors’ Confidence (February 20), artist Lewis Parker searched for a one - syllable animal to depict in his illustration for Everybody's Guide To Happy Oblivion — Sleep; he couldn't find one and the closest he could come was “ichneumon.” How about “ibex”? That’s just one syllable from the goal. ELZA J. JANSSENS. OTTAWA

Re Ted Ferguson's informative story on bankruptcy fraud in Quebec (For New - Style Crooks, A New Fraud Squad, Reports, March 6): Actually, in Quebec more and more failures of incorporated companies (federal or provincial charters) have come under the Federal Winding Up Act. I can see no reason why this practice should not spread elsewhere. The Bankruptcy Act was revised in 1949. The Federal Winding Up Act was passed in 1895 and has received little revision (if any) since then. It is unwieldy and has loopholes you could drive a truck through. With the FWU Act available, a credit crook with a company charter is a fool to use the Bankruptcy Act. Before revising the Bankruptcy Act, the FWU Act should be looked into first. In fact it would not be a bad idea to abolish it altogether. Any provisions in it that are necessary can be incorporated into either the Bankruptcy Act or the Federal Companies Act or both.

Well, you’ve done it again! Another blast at firearms (Now We Have A Chance To Abolish Capital Punishment. Let’s Not Muff It With Sentiment. Editorial, January 23). But you are beginning to get onto the right track. The statement that use of firearms in the commission of a crime should be justification for a mandatory jail sentence is a good one. It

is a statement that will be backed by the thousands who oppose further restrictions on gun ownership — an answer that is a real deterrent to the use (or rather, misuse) of firearms. The gun itself is no more dangerous than is a parked car. a beer bottle or a baseball bat. But place any one of them in the hands of a criminal or a maniac and it becomes a lethal weapon. We must legislate against the criminal, not against his tools. By antifirearms legislation we are only creating headaches for persons using firearms as tools for perfectly legal pursuits.

Army isn’t “learning”: it is

In your article on The Salvation Army (A Hundred Years Of War — And This Army Has Only Begun To Tight. March 6). you make the statement that The Army “is also learning to think of itself as a church — with middle - class congregations, pastors, and Sunday schools.” The Army always has thought of itself as a church, first and foremost. If this is not true, your article is about a different Salvation Army than the one I was brought up in. — F. w. MERCER, FT.,

Gas stations, yes—but so many?

When asked to comment on duplication of gasoline stations (Maclean’s Asks The Experts, February 20), W. O. Twaits, president of Imperial Oil, took the Little Jack Horner approach: He pulled out a plum and said. What a good boy am I. The fact that the numbers of autos has increased faster than gasoline stations may not be meaningful. The real question is: are there more than society needs? The answer is obvious. The first step in the solution of a problem is to admit that there is a problem. Ostrichlike methods will not do.

Why did the deadwood die?

In his examination of the problem of executive deadwood (When It’s lime To Tire People, That “Hard-Headed" Boss Of Yours Is Tar Too Soft-hearted, Argument. Febuary 20), Geoffrey Heighington offers this solution: lire the lot. This, I submit, is superficial and unrealistic. Workable alternatives are often available, such as early retirement at an adjusted pension, transfer (which, in spite of its misuse, can be the best solution) and even demotion. If a company is top-heavy with unproductive people, it is symptomatic of a malaise within the organization that wholesale firings will not cure, even though they may save the firm some money in the short run. The company would be wise to re-examine its promotion policy and its system of performance appraisal. If the man was once a ball of fire and is now ready for the dust bin, have rigidities, conflicts, poor communications in the organization created within our friend attitudes of hostilities and/or indifference? Finally, might not the existence of a lot of “surplus” people in the

organization constitute a challenge? Management might find ways to use this reserve to expand business.

Mrs. Barbara Cohen says she “dreads the day" when her children will question her about events in 1940 (Mailbag. February 20). Does she not dread the day she will have to answer

her children “with a semblance of objectivity” when they show her some hate literature they have been given and ask her. “Mom. are we to be gassed or sterilized?”

The “Pew” before Berton’s

I am surprised at the fuss about Pierre Berton’s book. The Comfortable Pew (A Churchman Talks Back To Critic

Pierre Berton, February 6). because in your issue of July 16, I960. I read the same message, in fewer words, in your column For The Sake Of Argument (Our Churches Are Damning The Wrong Kinds Of Sin). It was written by the Rev. W. E. Mann, at that time assistant professor of rural sociology at the Ontario Agricultural College. Guelph. Not all his ideas were the same as Berton’s but the essential message was the same.— MRS. KATHERINE B. DANIEL. RED DEER. ALTA. ★ 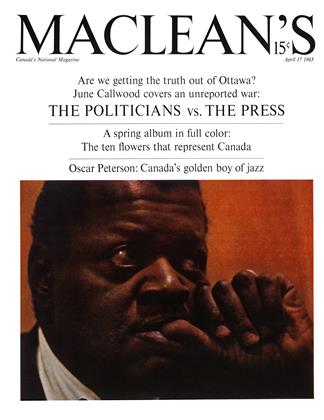