THE MUCH - PUBLICIZED Conservative troubles in Quebec have obscured the fact that the Liberals too have trouble in that province. Theirs is a leadership problem: who can take charge of the Quebec Liberal organization before the next federal election, and clean out the old guard with its retinue of unsavory hangers-on?

Much of the preliminary work has already been done, and various straws indicate that a fresh wind is blowing in Quebec politics. When Guy Rouleau resigned as chairman of the Liberal caucus (because of his involvement in the Rivard scandal) the man chosen to succeed him was Bryce Mackasey of Montreal-Verdun — a man who won the Liberal nomination over the old guard’s dead body in his own riding in 1962, and then faced not only a Conservative opponent but also an “independent Liberal” whose campaign was financed by the Montreal Liberal Organization. In 1962 and 1963 the Liberal campaign committee in Quebec was made up exclusively of old guardmen—Guy Rouleau, ex-minister Yvon Dupuis, exminister Azellus Denis (now a senator) and others of the same persuasion. Not one of these is on the committee now; they have been replaced by young, reform-minded men who are introducing new standards of conduct into political campaigning. A new federal organizer in Montreal, Robert Giguere, has been quietly replacing the old stalwarts of the Liberal machine with a different type of man. But even the people who are doing these things admit their efforts will fail unless new, strong and ruthless leadership is imposed at the top.

It was the search for a new Quebec Liberal leader that prompted the recent rumors that Premier Jean Lesage might come back to Ottawa. It is now known that these rumors were wishful thinking.

Lesage has said nothing in public, but privately he has assured his friends and especially his colleagues that he would not leave Quebec, at least in the near future. In this context “in the near future” means “before another provincial election.” Three young men in the Lesage cabinet are rivals for the succession: René Lévesque, minister of natural resources; Pierre Laporte, municipal and cultural affairs; and Paul GerinLajoie, education. All are content to serve under Lesage, but would not serve under each other without a dingdong battle for the leadership which, if it took place before election time, would weaken and might even defeat the Liberal government in Quebec.

Failing Lesage, some federal Liberals are hoping to persuade Paul Gerin-Lajoie to quit the provincial for the federal field. He is a man of

first-rate ability who has made an admirable job of organizing the new department of education in Quebec.

Not many people believe that he would come, though. There is a strong prejudice just now, among the younger officials and politicians in Quebec City, against the whole area of federal politics. A man who enters the federal field is likely to be called a federaste by former friends and acquaintances. And since GcrinLajoie has been a leading figure in Quebec’s autonomist moves during the last five years, he presumably would be even more sensitive than most people to this kind of sneer.

Also, there are many who doubt the wisdom of importing a leader from the provincial field. The record in both major parties is not encouraging — John Bracken and George Drew in the Conservative Party, Stuart Garson and Angus MacDonald in the Liberal, were never able to equal in the federal field the stature they had achieved in the provincial.

Favreau was brought in to do the very thing that is still so urgently required, clean up Quebec politics and attract a different type of federal candidate. His qualifications seemed to be perfect—unquestioned honesty, a distinguished record of public service, high intelligence and proven capacity in his chosen work, which was closely related to legislation. The fact that he had no experience in politics seemed, in the circumstances, not a

drawback but a positive advantage.

Alas, it did not turn out to be so. Favreau was not only honest himself, he thought everybody else was equally so, and he did not know' the people he had to deal with in the political jungle of Montreal. All too literally, he couldn’t tell the good guys from the bad guys. The result was the quicksand of catastrophe in which the Pearson government has been floundering since November.

Among the present cabinet ministers from French Canada, the only one who seems to have the necessary combination of political experience, administrative capacity and ruthlessness is Maurice Sauvé, minister of forestry and rural rehabilitation. Sauvé’s friends and enemies agree on one thing—he is tough. By the old guard that ran the Quebec Liberal machine until the day before yesterday. Sauvé is not merely disliked, he is hated. They have always regarded him, quite rightly, as an implacable enemy, who would not hesitate to throw them all out if he got the chance.

Sauvé’s trouble is that his enemies are not confined to the old guard. In the present caucus of Quebec MPs he has virtually no support at all—though the present MPs are not all old guardsmen by any means. They suspect Sauvé of the sin for which Brutus killed Caesar, personal ambition, or as one Quebec MP phrased it, “ruthless impatience.” Whether or not these suspicions are well founded, they indicate the lack of one quality desirable in a leader: the ability to attract and hold loyal followers.

But this brings the questing Liberals back to square one. If not Sauvé, who? The need for a satisfactory answer grows more urgent w'ith every day that passes, BLAIR FRASER 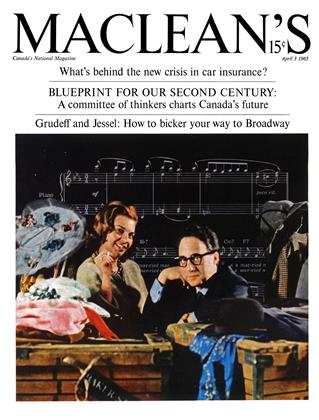