EXPANDING THE FRONTIER OF TEDIUM JAMES BANNERMAN May 15 1965

“SHORTLY AFTER sunrise I waked, or regained consciousness, to find myself in an open grave. Looking around me I observed that all the other graves in the churchyard were open. Suddenly a trumpet sounded and those in the graves stood up, as I did, which led me to suppose that the Day of Judgment had dawned. This subsequently proved to be the case.”

When and if the Earl of Avon, the former Anthony Eden, describes his experiences on the Great Day, he’ll probably do it pretty much like that — accurately, flatly, concisely, and with careful detachment. He will, that is to say, if The Reckoning (Longmans

In it he covers the fateful period from the Munich crisis of 1938 until the end of the Second World War; yet he does it in a way so bloodless and even boneless that his book, which could have been fascinating, is a monumental bore.

This is particularly disappointing in view' of the positions Eden held during that period. In 1938, when the Munich crisis began, he was Britain’s foreign secretary as he had been for six years. He resigned in protest against Chamberlain’s appeasement policy; but when war broke out Chamberlain put him in charge of the Dominions Office, with the special privilege of sitting in at meetings of the war cabinet.

In the spring of 1940 Churchill, who’d taken over as prime minister, appointed him secretary of state for war, and that winter switched him back to the foreign office, where he stayed as its head until the end of the w'ar.

Thus Eden had a matchless chance to watch history in the making. He was closer to great events than all but a handful of others in high places, most of whom were his working colleagues and about whom he could have told us all sorts of revealing details.

Lord Avon has done no such thing. Not even Churchill, his superior and intimate friend, is portrayed with convincingly life - like touches. Men like Roosevelt. Stalin. De Gaulle, and Eisenhow'er are reduced to little more than their names and bare outlines of their deeds and policies. His nearest approach to a word-picture of Roosevelt is to say that when they first met. he “displayed all the charm I had been led to expect.” De Gaulle is described, at Lord Avon's first meeting w'ith him, only as “a tall and somewhat angular figure in uniform.”

Our owm Mackenzie King was “a very fit old man.” And many of the great events Lord Avon tells about are similarly reduced, except as to their driest factual details, to the same terse banality. His summary of the fall of France, for example, gives that disaster rather less dramatic impact than the fall of a cake when the oven door is accidentally slammed.

Also newly on the shelf:

(Ryerson, $5.50). These memoirs of Canada’s b e s tk n o w n Protestant churchman help to explain his celebrated intemperate advocacy of temperance by giving his background — the now'-vanishing Ontario he grew up in, which still seems to influence him so notably as to make him a kind of museum piece.

• 3 ON A TOOTHBRUSH: Jack Paar

(Doubleday, $5.95). TV has probably prepared you for this book: an account of Jack's travels, with his wjfe and daughter, to various countries, plus a collection of superficial essays on various things. A pleasant waste of time. 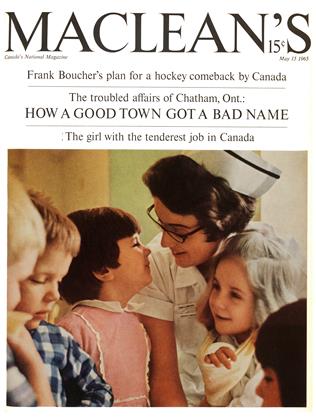