JOHN FORD’S Cheyenne Autumn is a blockbuster of a Western—but unfortunately also a bust. It’s about the starving remnants of the Cheyenne nation, who in 1878 skipped their dusty Oklahoma reservation and started a long last flight back to their homelands in Wyoming. It’s also about the consciences of the white men who are in charge of the Cheyenne—a captain of the cavalry (Richard Widmark imitating John Wayne), the secretary of the interior (Edward G. Robinson), and a German immigrant cavalry officer (Karl Malden) named Captain Wessels. Wessels becomes the instrument of white prejudice and greed when the frost-bitten Cheyenne take refuge in his fort.

The picture is so determinedly proIndian that it’s virtually a message Western. But even so, the Indians do not emerge as real heroes. They have only the negative heroism of the persecuted. It’s not so much that the Cheyenne are good guys, as that most of the whites are bad guys.

Wyatt Earp, for instance, makes a cameo appearance as a boozed-up gambler who defeats a challenger by shooting under the table. Ford accuses the much-touted early Americans of gross injustice toward the noble savage, but since the Indians were already defeated by the time of Cheyenne Autumn, it seems a bit late to state the case.

As released in Canada, Cheyenne Autumn runs an hour shorter than when it opened in New York last November. It must have been slow to begin with; now it’s both slow and choppy. Coming from John Ford, it’s a major disappointment.

TO COMPENSATE, there’s Major Dundee, a first-rate action picture, and something more. Here, the Indians are back to being bad guys, pure and simple, and that makes chasing them a good deal easier. The Apaches are vicious, sly, arrogant and dangerous, just the kind of dragon that every St. George dreams of slaying. Charlton Heston plays the St. George of this story, a Major Dundee in the U. S. Cavalry who is out to “smite the wicked, not to save the heathen.” So he recruits a small troop of soldiers— Confederate prisoners and derelicts— to wage a private war on the Apaches.

There hasn’t been such an exhilaratingly lush Western since Marlon Brando’s One-Eyed Jacks. The Mexican scenery makes a pleasant change from old Tombstone Valley, the battles are fought on a grand scale with plenty of stunts, and all the action is staged with a marvelous eye

for the gritty detail that brings a scene to life.

Charlton Heston has never been better or more vigorous. He rides to battle with the self-willed flair of a Napoleon, and fights with the fire of a prophet. His arch-rival, a gallant Southern officer, is played by the British actor Richard Harris with an elegance I wouldn’t have thought possible from seeing him in This Sporting Lije. The director, Sam Peckinpah, obviously has a way with actors— even the extras have faces you remember. Major Dundee has too many flaws to be a classic, but it's good enough to make me think Peckinpah will come up with one sooner or later.

THE TOMB OF LIGEIA: The latest and best of the Vincent Price/Roger Corman/Edgar Allan Poe chiller-dillers relies less on Gothic gimmicks and more on odd quirks of the human personality, all set in the ravishingly English setting of an abandoned abbey. This one’s not aimed primarily at the teen-age laugh-scream market; the theme of necrophilia is more likely to bore than shock them.

JOHN GOLDFARB PLEASE COME HOME: features Shirley MacLaine as a virginal magazine writer in Peter Ustinov’s middle eastern harem. Funny? Now and then. If you happen to catch the trailer you will have seen all the best bits. WENDY MICHENER 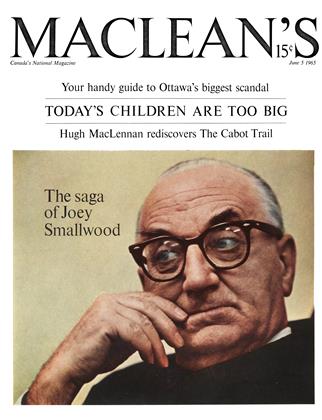