WHEN PEOPLE ask me, “Seen any good movies lately?”, what they really mean is not have I had a good time at the movies, but have I seen any movies that they would enjoy the next time they feel like going. And that’s where the trouble sets in. I mean, how on earth should I know? As the cliché has it, there is no accounting for tastes. It’s a critic’s job to do so, but he can hardly be expected to account for more than his own, and by doing so, perhaps, to arouse other people’s interest.

This week my problem has been solved. I have seen some good movies lately — Mirage, the Gregory Peck suspense picture, and the pirate-adventure, A High Wind In Jamaica. Both are the kind of forthrightly entertaining pictures that almost anyone who likes movies should enjoy.

Mirage has all the fascination of trying to put together a jigsaw puzzle without any idea of what the picture is going to look like when you’re through. At the start w'e only know that Gregory Peck is nice and that he lost his memory at the precise moment that a big American peace promoter commits suicide.

We are prepared for anything to happen (except of course that Peck should fail to embody the ultimate in American virtues), and anything does happen in the most satisfying way. Peck races, or rather flees around New York (used, for once, to full advantage as the dramatic background that it is), in search of his memory, picking up one clue here, one clue there, and always with a mysterious crew of evil-wishers hot on his trail. Diane Baker appears winningly as one of those girls who may turn out to be either good or bad, and Walter Matthau provides short-lived pleasure as a private eye who should have stuck with repairing refrigerators.

Mirage has its funny moments and is free of the self-consciousness that afflicts so many Hollywood movies by older directors; and Edward Dmytryk (who was born, incidentally, in Grand Forks, B.C., in 1908 L has directed at a jump-cutting pace many a younger director might envy. Best of all, Mirage presents the satisfying spectacle of a single, ingenious and upright man overcoming the powerful two-faced forces of evil in the split society of the atomic age. And unlike James Bond, he does it all on his own — no ejector seats, not even a gun.

BY COMPARISON, High Wind In Jamaica is a pleasantly old-fashioned

sort of adventure with Anthony Quinn baring his armory of teeth as a pirate, and a band of “innocent” young British children of the nineteenth century creating havoc among his crew.

As in the novel by Richard Hughes, the movie takes pleasure in comparing the anarchy and amorality of the children’s play with the grown-up play of the pirates in search of stolen booty. There’s a constant tension between the loyalties of the adult world and the world of children, each with its own code of honor and its own kind of cruelty.

This results in a marvelous mixture of melodramatic action with oddly funny moments of relaxation, and director Alexander Mackendrick (The Lady Killers, Sweet Smell of Success) is equipped to handle both with equal skill. Altogether it’s one of the most successful of recent wide-screen color ventures, and the best kind of family viewing — though it may cause children and parents to look suspiciously at each other for a while. 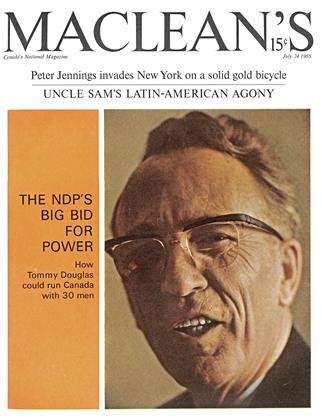