I’VE NEVER UNDERSTOOD how “sleeper” came to mean unexpected hit, rather than box-office poison, but anyway, the two sleepers of this year are unquestionably Nobody Waved Goodbye (Maclean’s. Jan. 29) the National Film Board feature about delinquent youth, and One Potato. Two Potato, an off-Hollywood production about racial conflict. Both pictures were made by relatively inexperienced talent in an atmosphere of skepticism and scrimping, and both were slighted at home until acclaimed abroad.

Like most sleepers. One Potato, Two Potato has an original (therefore risky) script dealing with difficult (therefore risky) material, and an unknown (therefore risky) cast. It tackles the subject that Hollywood has been most afraid of recently — relations between black and white Americans, especially when love walks in. It was made in Painesville, Ohio, for a budget of $250,000, and was singled out for praise last year at the Cannes Film Festival in spite of a singular lack of official American support.

The story concerns the marriage of a white divorcée to a Negro of her equivalent social level, and goes beyond interracial marriage to the even more emotionally fraught question of what happens to the child of her previous marriage with a white man. The first husband, who had deserted, returns, and in a fit of jealousy at being supplanted by a Negro, sues for custody of the child. Incredibly, he wins it.

The closing titles assure us that such court decisions are common in the United States. Maybe so, but the dice in this case are loaded. The mother (Barbara Barrie) is just too blameless, just too badly done by, while her first husband is a despicable nincompoop. Even that souped-up television show Divorce Court spreads the blame around a little more evenly. To top all. the Negro second husband (Bernie Hamilton) is marvellous beyond the wildest dreams of woman’s magazines.

Still, One Potato. Two Potato is not a total waste of time. It is pleasantly shocking to watch the very real face of Barbara Barrie (who won the best actress award at Cannes) with its slightly off-centre prettiness and terrifying vulnerability. And the Negro in-laws (Robert Earle Jones and Vinette Carroll) have an authenticity that speaks for itself.

Thanks to the prestige it won at Cannes, One Potato, Two Potato is now enjoying a healthy box office in Canada and the LI. S. And what Cannes did for the American picture. New York has done for Nobody Waved Goodbye, a feature which Don Owen virtually stole from the National Film Board while supposedly making a television documentary in Toronto.

Last fall. Owen’s film, after failing to win the award for Canadian films at the Montreal film festival, played for one lean week in that city and opened in Toronto, with practically no advertising, two shopping days before Christmas.

The reviews ranged from “flawed but interesting” (Robert Fulford, Toronto Star) to “a sad, dreary, ineffectual but sometimes moving little film” (Frank Morriss, Globe and Mail). Even if Torontonians had been really eager to see themselves as square parents forcing their children into delinquency, it’s doubtful whether they would have felt like it just around Christmas. It’s also not too surprising that the free - ranging documentary style of the National Film Board should fail to cause a sensation on its home ground.

But at the New York opening in April the particular freshness of this cinerna-verité style had all the impact of a discovery and caused the toughminded critic of the Herald Tribune, Judith Crist, to issue an outright command: “Don’t miss it.” The New Yorker raved, and even Vogue liked it. When a chic magazine like Vogue praises a simple - hearted film like Nobody Waved Goodbye, you know the picture’s reached the stage where everyone has to see it, if only to be able to hate it.

Reports from first showings in New York, Washington and Boston indicate that Nobody is attracting a mixed audience of middle - class teenagers (not the leather-jacket set) and adults. Apparently it has that rare appeal that attracts both teenager and grown-up movie buffs.

Thanks to all this, Don Owen was able to see The Luck of Ginger Coffey named the best Canadian feature at the annual Canadian film awards in Toronto last month with barely a twinge of regret. Nobody Waved Goodbye is now going into full national release in the U. S. and Canada, and is even coming back to Toronto in June with, incidentally, a whole new advertising campaign. Both stars, Peter Kastner and Julie Biggs, are being widely auditioned, and Don Owen may even get to make another feature.

he had with Marty in 1955, but sleepers by their very nature can’t be repeated. Besides, the temper of the times has changed so much that the story of a sweet middle-aged thing (Geraldine Page) who finally snags a mate at a postmasters’ convention, now seems unbearably maudlin. Geraldine Page is clearly a most desirable woman, so they have given her the handicap of a poisonous personality, and most men in the audience may wonder why on earth Glenn Ford, of all people, wants to spend the rest of his life with her. 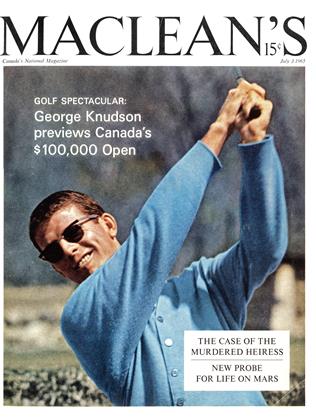