STEP BACK AND REPULSE MONKEY and Turn Body To Single Whip, which, looking from left to right, happen to be the manoeuvres the young lady above is performing with so much chic, are two of the one hundred and eight variations on thirty-seven basic movements of Tai Chi Chuan (“Tie Jee Chwan,” to non-Orientals), which is in turn a Chinese exercise that is a lot more graceful, a lot less sweaty and about thirteen hundred years older than 5BX. It is also, according to its small but growing band of Canadian devotees, as healthy as a ten-mile walk in the country and as slimming as a week in a reducing machine.

According to ancient Oriental legend, the Chinese began practising Tai Chi during the Tang Dynasty, which stretched from 618 to 907 A.D., and like everything ancient and Chinese, it is religious (Taoist) and esoteric (some of

its other variations are poetically titled Carry Tiger To Mountain, Snake Puts Out Tongue, Wave Hands Like Clouds). But Edward Maisel, an American whose book 7 ai Chi For Health is the pioneer North American work on the exercise, advocates Tai Chi on practical medical grounds. Maisel should know: he is a former research director for the New York Institute For The Crippled And Disabled and he is now lecturing on the values of Tai Chi around New York State with the support of the State Medical Society and the New York City Health Department.

The essence of Tai Chi, according to Maisel, is slow, continuous, circular movement, the slower the better. “For beginners it (the whole roster of Tai Chi movements) may take fourteen minutes,” he writes. “After long practice, you can prolong it to nearly twice that.” The secret is that you must concen-

trate on each movement as if you were doing it for the first time every time (Maisel calls Tai Chi the thinking-man’s exercise), and with this kind of concentration, the exercise will tone your muscles, soothe your nerves and refresh your mind. The leisurely but intent pace of Tai Chi, Maisel claims, makes it valuable for the elderly and weak and far healthier for businessmen than “a burst of golf in an atmosphere of tension.”

Tai Chi is still practised in China today. Edgar Snow, an American reporter who visited Communist China a few years ago to research his book The Other Side Of The River, saw young and middle-aged citizens doing their Tai Chi steps in a public garden at seven o’clock one morning. “Tai Chi,” a wrinkled Peking headwaiter told Snow, “is good for personal contradictions.” 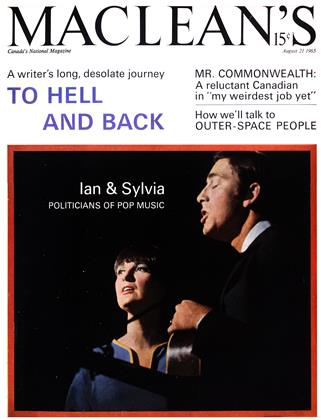