DR. KRISHNA BAICHWAL, a specialist in cardiovascular surgery, is eligible to hang out his shingle in Britain, British Columbia and Nova Scotia. However, since he happens to prefer to live in Ontario, he holds a salaried job as a resident surgeon and research fellow at Toronto Western Hospital. There he teaches interns and regularly performs operations. Much of this surgery is minor, but if Dr. Baichwal were not competent, he might easily maim or kill his patients.

By such practical standards as this, Krishna Baichwal is a skilled and experienced physician and surgeon. Yet as long as he chooses to live in Ontario, he can never establish a practice of his own. The most he can hope for is the kind of job he has now, as a hospital resident — for which salaries average four thousand dollars a year.

How bad can Bombay be?

Dr. Baichwal’s problem is that he got his medical training in Bombay. And, under the blanket ruling laid down by the Ontario College of Physicians and Surgeons, he therefore has such a poor academic background that he is not fit to practise privately in the province where he has chosen to live. This is not a ruling requiring Dr. Baichwal to gain additional experience in Canada or to pass certain Ontario tests. It is a rule that says, in effect, that no matter where he works, what operations he performs, or how many examinations he might be able to pass, he will never overcome the deficiencies of the undergraduate training he got in Bombay.

If Dr. Baichwal wants to establish himself in private practice in Ontario, he must forget he is already a cardiovascular specialist and sign up for medical school. Since he is already thirty-six and demonstrably capable of teaching medical students, this is a course of action Dr. Baichwal is, understandably, reluctant to lake.

Krishna Baichwal is not a rarity. Dr. Apkar Aynaciyan is a forty-fouryear-old Turk who seems similarly well qualified. He graduated in medicine from Istanbul University, spent four years studying internal medicine in the United States (where he could

sit the qualifying exams if he could get U. S. citizenship) and holds the certificate of the U. S. Educational Council for Foreign Medical Graduates. The ECFMG certificate is one which both the American Medical Association and the U. S. Association of American Medical Colleges believe is “evidence that the recipient (has) medical knowledge comparable to that expected of graduates of approved medical schools in the U. S. and Canada.” Dr. Aynaciyan is a fellow in gastroenterology at Toronto Western Hospital but he cannot, under Ontario regulations, qualify to practise on his own.

Dr. Rasheed Afifi and his wife Mary Papantony are both doctors; he a surgeon, she an anaesthetist. Both were trained in Egypt and have done postgraduate work in the U. S. They cannot practise in Ontario.

Nobody knows exactly how many other foreign-trained doctors there are in Canada today who find themselves in the same circumstances. But in Ontario alone, where the provincial College of Physicians and Surgeons takes a tougher line than most, there are at least a hundred such people — perhaps as many as three hundred. They are permitted to work as hospital residents, medical researchers or medical teachers. But they are not allowed — and perhaps never will be allowed — even to try the exams every doctor must pass to go into private practice.

volved if they felt it was being imposed equally on all nationals. But the policy which the Ontario college laid down last May actually spells out what one Turkish doctor describes as “a sort of ethnic discrimination.” One passage of the policy statement says bluntly that “graduates of medical colleges in India and Pakistan [are not] accepted for full registration . . .” And the college’s list of seventeen countries whose doctors may be eligible for the qualifying exams does not contain a single nation (except the U. S. ) outside Europe.

This policy ruling has so angered and frustrated a group of foreign doctors in Ontario that they have formed a loosely knit organization called the Foreign Medical Graduates’ Committee. It is dedicated to “convincing the C ollege it should not be so stubborn and arbitrary.” Its spokesman is Dr. Surcsh Anand, a thirty-three-year-old bachelor who got his training in Lucknow and the United States and now works as an intern in the emergency ward at Wellesley Hospital, Toronto. Dr. Anand says he knows of at least a hundred foreign doctors, most of them non-Europeans, whom the Ontario college refuses to accept as candidates for the qualifying exams. Among them are Turks, Italians, Filipinos, Egyptians, Frenchmen. Dutchmen, Indians, Pakistanis, Japanese, Chinese (from Red China), Formosans and Latin Americans.

“All any of us want is for the college to treat each of our cases on its individual merits,” says Dr. Anand. All other provinces, he says, do this. In Nova Scotia, for instance, a doctor from anywhere in the Commonwealth can hang out his shingle if his training is recognized by the General Medical Council of the U. K. as qualification for practice in Britain.

This high opinion of the British council’s judgment is not shared, evidently, by Dr. D. Laurence Wilson, the Ontario College’s president, or by its registrar, who insists on remaining anonymous. Dr. Wilson has defended the college policy in letters to the newspapers. And the registrar says many medical schools in India are so ill-equipped with teaching hospital beds and have such a high ratio of students to teachers that they produce graduates trained only to pass exams,

"not practise medicine as we expect it to be practised in Ontario.”

“Nonsense,” says Dr. Baichwal, the cardiovascular specialist who trained in Bombay. “They set about evaluating India’s seventy or so medical schools by writing to thirty of them and asking for details ot their establishments and methods. When they got six replies, they used that information as the basis of the decision ihat no Indian doctor was fit to practise in Ontario.”

Dr. Baichwal has a letter from a college official saying they did, indeed, receive only six replies.

The college's reluctance to sec foreign doctors fully registered would be easier to explain if there were a surplus of doctors in C anada. But. as the Hall Royal C ommission on Health Services warned, a severe shortage of physicians seems a real possibility within a few years. Dr. Glenn Sawyer, general secretary of the Ontario Medical Association, says Ontario is already short of doctors. He knows of ninety openings for doctors in Ontario, while only sixteen doctors are registered with him as job-seekers. Other surveys show there are about thirty small communities that are seriously short of doctors — or have no doctors at all.

Spokesmen for the medical college insist that the shortage of doctors is an irrelevant issue. As evidence they cite the ten-year record of foreign doctors, most of them Europeans, who have been allowed to go into practice. More than half of these, the college points out, set up practice in Toronto, not in small communities where the shortage exists. But Dr. Anand says: “I think there is little doubt that most of the hundred or so foreign graduates in touch with our committee would be prepared to work where directed for specified periods of time as a condition of being granted a place on the general-practice list.”

And he has personal reasons to scoff at the college’s claims that foreign doctors, while denied private practice, can work safely enough as residents or interns because they are under constant supervision. An emergency-ward intern himself, Dr. Anand rarely has a supervisor with him when he treats patients with symptoms (lung congestion, for instance) that can mean one of several diseases — and the wrong diagnosis could mean death.

Here's a little gallery of foreign-trained doctors who aren't allowed even to try making the grade in Ontario.

Perhaps the most personal and pointed indication yet that the medical establishment doesn’t want certain foreign nationals practising in Ontario was contained in a letter Dr. Anand received from the Canadian Medical Association. “The physician-population ratio in India is much less favorable than it is in Canada, and perhaps you have a moral obligation to return to apply the medical knowledge you have acquired in North America.” “That,” Baichwal suggests, “is none of their bloody business.”

“There’s always a group of people ready to accuse us of trying to maintain a closed shop,” the college registrar told Maclean's, “yet all we are doing is fulfilling our duty to protect the public of Ontario.” 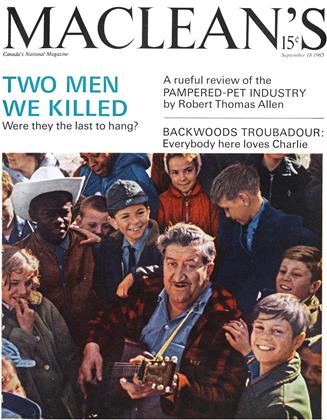