A NEW WAY TO FIND A SOULMATE-FOR $2

Pete Stickland is an individualist who first got into the national news because neighbors objected to the pet alligators he kept in his basement home in Oakville, Ont. Now the ’gators are gone, and he’s remembered as the most talked-about scab of Canada's postal strike. His diary:

ON THE FIRST DAY of the strike, I promptly crossed the picket line to report for work, as usual. 1 was one of a small minority, but my fellow workers gave me only a good-natured razzing. Even their cries of “Scab!” were friendly.

Right there, by the door, I got my first laugh out of the whole affair. It came from a visitor from New York State, seeking her mail. Quickly she took in the meaning of the pickets. Then she spied my mailbag.

“He’s not on strike!” she exclaimed. Then turning to a group of pickets she demanded with genuine surprise: “Why aren’t you beating him up?”

All along the mail route, amazed housewives asked me, “What — no strike?” A lot of them evidently thought that because I insisted on working I must be a man without principles. On the contrary, it involved an important point of principle for me — even if it meant crossing the picket line. While some Royal Mail carriers (such as the ones who handle parcels and the pickups from mailboxes) remained on the job because they have written contracts which they cannot legally break, I happen to believe that the ordinary letter carrier like me has a verbal contract which he cannot morally break — to get out the mail every day he is capable of working. As I saw it, if pre-strike pay was too low and the government’s initial offer inadequate, every mailman had four alternatives besides strike action — negotiate, slow down, forget it or quit. And since I don’t belong to the Federated Association of Letter Carriers, I felt free to make my own choice. SECOND DAY: This time a hostile reception committee gave me the silent treatment. Embarrassed, I studied asphalt cracks all the way to the post office. Inside I expected chaos and no mail; instead I found order and ample work. Most night sorters had come in. I was one of five regular mailmen still working, along with three probationers and three or four students. Sorting mail, I saw that a “starving” picket had stoppered the backyard bottleneck with his shiny 1965 Ford.

Crossing the picket line again, I was buttonholed by a picket who urged me to strike if only to avoid a future boycott. The strikers’ bitterness seemed to stem from the thought that any pay raise would equally benefit the scabs like me.

THIRD DAY: On my weekend off, I read papers. Most had stories listing the disadvantages of being a mailman: low pay, heavy loads, harsh discipline. Few listed all the advantages: nearly $70 per week to start, with regular raises over four years totaling $750 per annum; three weeks’ paid vacation after six

months; all clothing found; annual boot allowance of about $40; Christmas tips ranging from $50 to $250 or even higher; the chance of promotion carrying a raise of $450 per annum; a salary review every two years with (usually) an upward revision; a pension scheme; fifteen days’ annual paid sick leave. FOURTH DAY: It was Sunday but no day of rest for me. Peeved at the strikers’ unreasoning onesidedness, I was determined to picket the pickets. I made four plywood signs, two forming a sandwich board and two smaller ones back to back on a long handle. One large sign showed a complacent, crowned lion smirkingly holding four aces and a joker. The legend read:

On the back I printed:

As an added touch, I hung an old winter boot from a cord and drew a snoopy Mr. Chad, who asked: WOT, NO BOOT ALLOWANCE?

FIFTH DAY: Donning my signs, I marched to the post office, fully expecting to be mobbed. Instead, to my surprise, the striking picketers welcomed me to their ranks. For ten minutes I was a hero, jubilantly paraded around the post office for all to see. Then, after I had begun my up-and-down march before

the main entrance the strikers began to ponder the words on my signs. Stunned, little knots of pickets clustered along the sidewalk, trying to decide how to cope with this unforeseen turn in the Great Postal Walkout. Finally, a frowning striker approached me. “Say,” he said, obviously bewildered, “are you on our side?”

From then on, I was on my own again — spurned but far from shunned. A striker assigned especially to me began to dog my footsteps. Around his neck he wore a crudely lettered sign which at first read: THIS GUY IS A SCAB. Then when somebody realized how this might be misinterpreted, the sign was hastily changed to read: THIS GUY

When my personal picket paused to examine my signs, he reported back to his fellow strikers in an anguished cry: “He’s using union plywood!”

Next, it was my turn to be anguished. The boot I had hung on the rear sandwich board as the mobile portion of my art work was a little too mobile. With every step, that boot clobbered me painfully in the legs. I could have simply removed the boot, of course, but I had my pride. As a compromise I adopted a lumbering sort of Boris Karloff gait which let the boot swing between my legs on two out of three steps. And so I went miss-miss-bang, miss-missbang, until each calf was one red welt almost from ankle to knee. After three agonizing hours, I decided I had picketed long enough. By then I’d had a memorable encounter with the police — in the person of Detective Shaver.

“So you’re against the boys, are you?” Shaver demanded.

“You have a perfect right to walk up and down with a sign as long as you’re orderly,” Shaver said darkly, “but . .

What the “but” boiled down to — as I got it from Shaver — was that a strike, legal or not, was in progress and that, up to the time of my arrival, picketing was orderly. If a disturbance developed and / was involved, I could be charged

with creating a disturbance, breaking the peace, inciting a riot, assault and battery or what-have-you.

I returned to my picketing while Shaver consulted with several strikers. Then he jabbed a forefinger at the word “damn” on one of my signs.

“How would it be if you took that out of there?” he challenged.

I pointed to the word “Scab” on a striker’s sign. “How would it be if he took that out of there?” I mimicked. “Is ‘damn’ any worse than ‘scab’?”

Both words stayed. But looking back, I’m sorry I ignored Shaver’s “damn” suggestion. I could kick myself for passing up the chance to exploit the hilarious nuances of a sign reading: FULL SPEED ASTERN AND - THE PUBLIC! To which I might have added a legitimate rider: THIS SIGN APPROVED BY OAKVILLE POLICE DEPARTMENT!

After lunch, with my signs off, of course, I delivered mail on Oakville’s main street, pursued by a relentless shadow who proclaimed my shame with his sign. Presently an enraged two-hundred-pound citizen confronted my tormentor: “This guy may be a scab, but you’re a sonofabitch! My cheques are held up and I can’t pay the rent! They ought to fire the lot of you!”

I had told myself I wouldn’t revile the pickets but after that long, hot, hard, painful and exciting day, I got back to find my car with two flat tires. For an instant I forgot my promise and pounced, verbally, on the nearest striker. “You bastard!” I screamed. The first two service stations I walked to had no hand pump; at a third I borrowed a tank of compressed air. But back at the car I found that those “orderly” pickets had swiped both valves.

SIXTH DAY: “I’ve just had a phone call from Toronto,” said the postmaster. “One of the inspectors saw that film on last night’s TV news . . .” Already I could see the citation: “For tireless

devotion . . . for simple courage above and beyond the call of duty. . . .” My heart swelled. Then the rest of the postmaster’s words got through to me: “ . . . and so the inspector asked me to ask you, in view of the current situation, would you please always wear a hat while delivering mail?”

That day, my “morning” walk took six and a half hours. At every tenth house I had to give a blow-by-blow description of my own actions on the picket line. This time, I didn’t have to imagine any praise. Time and again I heard: “Keep up the fight!” The most heart-warming comment came from one old lady who cried: “What a wonderful sight to see you!” And I handed her her Old Age Pension cheque. SEVENTH DAY: The strike was ended at 8:15 a.m. by a vote of 12-11. The boys came back, not to the mountain of mail that they might have expected — because the mountain had been moved by scab labor—but enough to be going on with.

One or two walks had fairly heavy mail and I was asked to help one of the men who had shadowed me two days before. Naturally, I refused. Then I was put on another walk and, naturally, the other guys refused to have me. So I went out, as usual, on my own walk. Now I’m not winning any popularity contests around the post office. But I made my choice and the only friends I lost are people who would not respect my right to be different. They are the ones I had in mind when I told a reporter during the strike: “Who 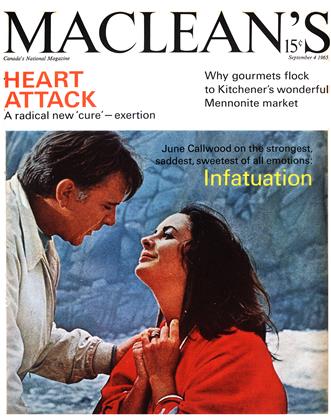