Can ",Mr. Commonwealth” continue to keep his feuding family together?

CANADA’S CONTACT WITH Rhodesian and other recent Commonwealth crises has been marginal but at least one Canadian has been in the thick of them. Arnold Cantwell Smith, former Canadian ambassador to Cairo and Moscow and then assistant undersecretary for External Affairs in Ottawa, has been living in the eye of a hurricane ever since last August when he took on the newly-created job of secretary-general of the Commonwealth (See Maclean’s, August 21). In the intervening six months he has looked sometimes like Jonah, sometimes like the boy on the burning deck, occasionally like Horatius at the bridge.

The Jonah role came first. No

sooner had Arnold Smith accepted the new post than Malaysia booted Singapore out of the federation. He had barely arrived in London when fighting broke out between India and Pakistan over Kashmir. It almost seemed he had been chosen for the part that Winston Churchill so eloquently rejected, of presiding over the liquidation of the Commonwealth.

In fact things were not quite that bad. Smith’s first task as secretarygeneral was to receive Singapore’s application for membership in the Commonwealth — incidentally establishing it as a principle that such applications should be handled by the new Commonwealth secretariat and not as before by Britain’s own Commonwealth Relations Office. Acceptance of Singapore was not the easy automatic affair it appeared to be — the ruling regime had other enemies than the Tunku of Malaysia, and some members talked daringly of blackballing this upstart from the club —but the matter was straightened out without too much difficulty.

The Indo - Pakistan trouble, of course, was never straightened out by anybody and the secretary - general’s role there was negative, but not

However the gravest crisis and the

field of liveliest activity for the new secretariat was Rhodesia. The terms of office of the secretary-general include the right of access to all heads of government in the Commonwealth, and Smith spent November in a tour of African members (his first trip south of the Sahara) to confer about things in general and the Rhodesian rebellion in particular.

No two men could be farther apart in their views than Arnold Smith of Canada and Ian Smith of Rhodesia.

Arnold Smith is opposed to granting legal independence to Rhodesia on any terms short of majority rule — Le. Rhodesia should remain a colony under ultimate British authority until such time, whenever it may be, that Africans are accorded equal rights with white settlers. In the negotiations that preceded UDI Britain was willing to offer more than that—independence on the basis of promises that in other countries have never been very well observed. The Smith in London was distinctly relieved when the Smith in Salisbury rejected these British terms which, in Arnold Smith’s opinion, would eventually have legalized a situation very like the present one in Rhodesia.

Smith’s African tour was cut short by the need to return to a Commonwealth economic conference in London, shortly before the Rhodesian crisis began. He knew from his talks in Africa that African delegates wanted to discuss this rebel regime in Salisbury.

Back in London he discovered that the officials in charge of organizing the conference had decided not to put Rhodesian sanctions on the agenda at all, apparently fearing the debate might rock the boat or embarrass Whitehall. Smith succeeded in convincing them that nothing would be more likely to confirm African suspicions of British policy than a refusal to discuss sanctions.

However the secretary - general’s influence has probably been most effective on the other side of the dispute—among African leaders. From the outset, the impulse of many was to leave the Commonwealth unless

Britain instantly did what they wanted —even the extension to December 15 of the deadline for British action was a considerable concession to moderation. Arnold Smith succeeded in convincing some of them at least that precipitate withdrawal would be selfdefeating. By happy coincidence he was Canadian minister in London during the Suez crisis and was able to draw on that experience in the argument. “Don’t,” he kept saying, “look at British policy as if it were a permanent unalterable fact of life to which we can only react. Remember that British policy can be changed and that the Commonwealth is a good instrument for changing it. At Suez, largely through Commonwealth influence, British policy was changed 180 degrees. This time 30 or even 10 degrees of change would be enough. So don’t quit, stay in and fight.”

How long this argument will prevail remains to be seen. So far, it seems to be working. 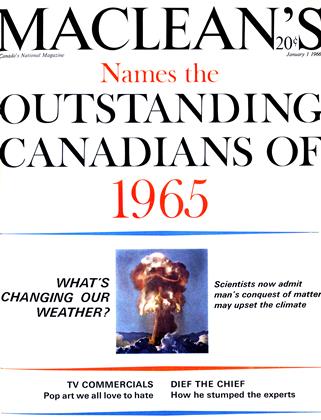