WHAT HAPPENED TO CANADA’S KINSEY? He was fired JON RUDDY October 1 1966

IT MAY BE INDICATIVE of Canadian attitudes toward sex that the country’s first sex survey hasn't yet found a publisher, and that the man who conducted it left the faculty of the University of Western Ontario with a distinct feeling that he had been a thorn in the administrative flesh.

He is Toronto-born Dr. William Edward Mann, who for four years was an assistant professor of sociology at Western, and who now is chairman of sociology programs at Atkinson College in Toronto. He is also an ordained Anglican priest, and it was a department of the Anglican Church of Canada that, four years ago, commissioned him to survey premarital sex on the Canadian campus.

What Ted Mann found out, in essence, was that there wasn’t all that much sex on the Canadian campus — at least not at Western, where only 15 percent of the women and 35 per cent of the men had ever indulged in intercourse. But the reassuring results of his probe haven't, until now, been revealed, and anyway the Western administration evidently found the whole business of a sex survey distasteful.

In fact, Mann's troubles at Western were not altogether connected with the survey. He sees it as one of several contentious issues, the first being his extension course in parapsychology (extrasensory perception), which raised academic eyebrows. Then there was his on-campus association with two scruffy-look-

“I didn't set out to write a best seller, although I don't see why it wouldn't sell. The Kinsey Report was dull as dishwater.”

ing ex-convicts, research subjects for a book he was writing on the Guelph Reformatory. “They would occasionally come around to the office to ask for me, and turn up in the cafeteria on Saturday mornings,” says Mann. Presumably, the administration didn’t like that. “I got the signal that working with these fellows was not discreet.” Then he delivered a lecture to Western’s Student Christian Movement titled. Is There A Sexual Revolution On Campus? (This was about halfway through his research and his conclusion, in effect, was no.)

“Two weeks later I was encouraged to resign,” he says. “1 was told that I didn’t have to go, but would I please go. They made sure I did. For example, they moved my office to the top floor and 1 was without a phone for three and a half months. 1 had to use the phone of a junior colleague. 1 was told that I wouldn’t get a raise or promotion. The survey may have upset the president and other top administrators. 1 suppose they felt that my research, which I was doing on my own time, was indiscreet. There is more to it than that, of course. Sociology is still suspect at Western, still associated with socialism and radical change. I was one of four out of five sociologists to leave. Our replacements arc specializing in population studies, a safer subject.”

The president of Western. Dr. G. Edward Hall, refuses to comment on the circumstances of Mann's leaving the campus. Dr. Grant Reuber. then head of economics and sociology, says Mann’s resignation was not asked for “explicitly.” Reuber insists that he personally had no knowledge of Mann’s sex survey until last winter, more than two years after Mann’s resignation was discussed.

that forms the bulk of his study. The survey was compiled from students’ responses to a detailed, 1 1-page questionnaire, consisting of 113 statements and queries ranging from, “1 say prayers regularly. Yes ( ); No ( ),” to. “Have you ever gone in a car to a quiet, out-ofthe-way spot and participated up to the point of, 1. Petting A; or, 2. Petting B; or, 3. Petting C; or, 4. sexual union.” (Petting A is defined as “contact with breast through garment,” Petting B as “contact with breast directly,” Petting C as “further.”)

Mann’s preliminary research comprised individuals and groups of volunteers: a psychology class, a Student Christian Movement group, nurses at a London hospital, a fraternity and a men’s residence (Western’s dean of women flatly refused him permission to survey a women’s residence). All this was by way of pretesting the questionnaire. The main survey, the one on which his conclusions and interpretations were based, was a random sample of the student population at Western. Mann culled every 50th name from the student directory and ended up with 120 students, of whom 67 percent were male — the actual percentage division of the student body. Ten of the 120 turned out to be nuns and married students. Ten more were substituted. The students were invited to a supervised questionnaire session. Those who did not turn up were

“Many of the students felt that Canada’s moral codes are confusing, unjust or unfair to human nature, and hypocritical. Most felt the churches don’t provide a satisfactory and realistic guide to sex behavior.”

persuaded to attend later sessions. Eventually, all but five filled out the questionnaire.

Surprisingly enough, the women at Western proved easier to query than the men. Mann has a theory about that. “After we had finished surveying the women in five or six sessions and the men were still coming after about a dozen, I said to one male student that one would think the women would be more reticent than the men. This chap said, 'Maybe the boys are afraid to admit they haven't had any,’ and he blushed. He was obviously someone who hadn't done much successful dating with girls. It was a blow to his pride. There were indications that other males felt the same way.”

What was to stop such students from exaggerating their sexual experience, or. in the case of women, from doing the opposite? Apart from the pointlessness of distortion (the completed questionnaires were, of course, unsigned), Mann feels that interest in the project kept the students scrupulously honest. Just to be on the safe side, though, he had two senior students carefully question selected participants following the sessions. “Their responses gave the impression that everyone was answering truthfully,” says Mann.

Mann feels that Western, which he calls Central Campus in his book, is the representative Canadian college with reference to sexual attitudes and mores. He points out that Canadian industries use London, Ont., for market research — it is supposed to be the representative Canadian city. He believes that a more permissive attitude would prevail at a big urban university. “Probably about 10 or 15 percent more students at the University of Toronto, at least among the boys, would have indulged in intercourse,” he says. “On the other hand, students at a Maritimes university would probably be less permissive than Western.” He has surveyed groups of students at York University, in Toronto, and Mount Royal College, in Calgary, and plans to incorporate the results in his book, but they have not yet been processed by computer. “York will be more liberal than Western, Mount Royal about the same,” he predicts.

decided to limit the survey. What the church wants is information on which to base changes in teaching and preaching tactics, especially to its young people's groups.

Mann’s book, tentatively titled Sex Before Marriage, is in a state of flux. Most of it is written, but some additional material, including a survey of students in an Ontario suburb, may be added. Meanwhile, McClelland & Stewart, a Toronto publishing firm, has turned down a rough draft. "I understand they felt it was not written in a popular style and would not sell.” says Mann. The responsible department of the Anglican Church has sought suggestions

on how to polish up the manuscript and these are being taken into account. Mann says the church itself may publish the book. “I did not set out to write a best seller,” he says, “although I don’t see why it wouldn’t sell. The Kinsey Report was dull as dishwater.”

Mann, who is 48, happily married and an avowed liberal, has no intention of sustaining his image as a Canadian Kinsey. But he feels his study, while not definitive, is more valid than some recent sex surveys on U.S. campuses using students in arbitrary classroom groups. “We have demonstrated that voluntary or ‘captive’ classroom groups in sociology or psychol-

ogy are predisposed to be more liberal.”

“The major interest I have,” says Mann, “is to establish the fact that there isn't any great revolutionary change in the behavior of young people, and that what change there is appears to be the result of a long-term trend toward big-city living, higher education, higher incomes and so on, and away from the church. Canadian young people are getting more permissive about sex, but it’s a gradual thing.

“Our family doctor asked me recently what I'd found out, and I said that perhaps one male college student in three had intercourse now and again. Ele said, 'What else is ni_w?’ ” ★ 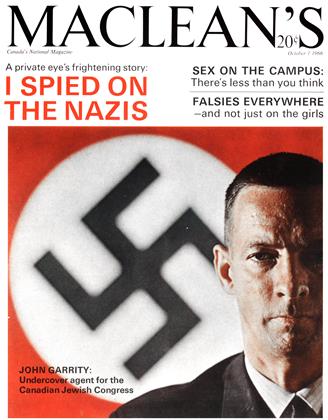