QUEBEC HOUSE in London is rather proud, a little embarrassed, and more than a little indignant to tell the visiting Canadian about something highly unusual in the English-speaking world — a university course in French-Canadian literature given at, of all places, the University of Birmingham.

Not only is it available there, it’s popular. Out of 60 British students majoring in French in the academic year just past, no fewer than 25 elected French-Canadian literature as their special study for third year. And a Birmingham student named David Reynolds is about to start post-graduate study at Laval, the first such beneficiary of a Commonwealth scholarship.

irhe man behind this hands-acrossthe-sea project is a Scottish professor named Fraser Mackenzie, who has no particular link with Canada but thought the field of French-Canadian literature worth exploring. Mackenzie is head of Birmingham’s French department. The man who conducts the French-Canadian course itself is also a Britisher, Cedric May, but he has

been a summer teacher at MacDonald College outside Montreal for several years and has a warm interest in as well as an intimate knowledge of Quebec affairs.

This knowledge of Quebec is what startles the French Canadians who visit Birmingham University. The Quebec Agent-General is invited to spend a day at the university about once a year. Hugues Lapointe, now Lieutenant-Governor of Quebec but Agent-General in London until last spring, spent a day there last November making the official presentation of 170 French-Canadian books to the Birmingham library. His successor Guy Roberge paid a similar visit in July. Both men were impressed not only by the warmth of their reception but still more by the sophisticated discussion of Canadian and Quebec affairs that took place, in .French of course, at the luncheon table.

“I could have easily imagined myself lunching in the college dining room at Laval," Guy Roberge said. “Everyone chatting away in fluent French about the very latest developments in Quebec’s literature or politics or even gossip.”

Incidentally, this British interest in French-Canadian affairs is not entirely one-sided. There are about 150 French-Canadian students in Britain. At a recent reception for Canadian students given by the Canadian Women’s Club in London the French Canadians were the largest numerical group to turn up. Some at least who come for their first visit this side of the Atlantic find to their astonishment they feel more at home in London than in Paris.

Language is the reason. EnglishCanadians speak American, and no matter how hard the English try to disguise it they dislike the American accent. But a bilingual French Canadian, like Hugues Lapointe or Guy

In Paris it's the other way round. Parisians are willing to make the effort to understand the broken French spoken by visitors from Ontario, since these foreigners do not have the impertinence to imagine they speak real French. But when people from Quebec turn up speaking w'ith fluency and great speed a language that is to the French an even more barbaric dialect than our American is to the English, the French of France are even more outraged than the English and much less polite at concealing their feelings. That's why more and more French Canadians find themselves unexpectedly delighted to arrive in London on their way home. BLAIR FRASER 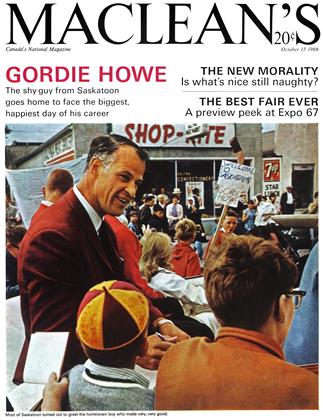