THE HISTORIC PRESENT CAN BE TENSE JOCELYN DINGMAN November 19 1966

Say, what finally happened to the Manitoba schools question? Tune in tomorrow

IF CANADIANS DON’T know much about their own history, it isn’t because Canada is a happy nation that has no history. We have lots of history, but most of it involves long, boring, political arguments over things like railways, freight rates, tax rentals, and the powers of provincial legislatures. Nor does our political life get livelier. Don’t you feel your brain filling up with glue every time you read the words PROVINCIAL PREMIERS TO MEET?

Actually, many of those old arguments are interesting, if you can find someone clever enough to explain them to you. The CBC has just proved this, brilliandy, in its series the Reluctant Nation, about the political problems which arose in the years after Confederation. Who ever would have thought you could make an absorbing television program out of the Manitoba schools question; or out of a long-forgotten dispute about whether Manitoba should be allowed to build a railway to the U. S. border; or. most unlikely of all. the provincial premiers’ conference of 1887? Yet these programs were not only absorbing; I had the feeling, while I was watching them, that I really understood, for the moment, what Canadian politics was about in the 1880s and 1890s.

It is one thing to read in a history text that some Ontario people didn’t like Catholics. It is quite another to see the Orange bigot, D'Alton McCarthy. spring to life on the television screen, spewing anti-Catholic venom. Even in a long book about Canadian history, an issue like the Manitoba railroad is reduced to a few confusing paragraphs. In a half-hour program, with the premier of Manitoba, the prime minister and the head of the

CPR giving their views, you begin to get a notion of how. and why, the CPR dominated Canadian politics for so many years.

The producers of the Reluctant Nation used the techniques of CBS’s old See It Now program, with television newsmen in modern dress interviewing the main characters in the political drama. The star of the series turned out to be Goldwin Smith, an English intellectual who was one of the shrewdest political commentators Canada ever had. Played by Norman Welsh, he appeared as an urbane observer of the Canadian scene, and his remarks, resurrected from the yellowing pages of old books and newspapers, still had fresh implications. In the 1887 episode, for instance, he remarked that Canada would never be a nation as long as French Canada remained intact.

My only complaint about the series is that they sometimes neglected to explain how the issues were resolved.

I don’t think it’s wise to assume that all of us can remember, exactly, what finally happened to the Manitoba schools question.

CASTING LIGHT on a different aspect of life was the CBC series The Disordered Mind. It is surely something of a breakthrough to show, on the national network, films of real psychiatrists interviewing real parents about their children’s problems. This sounds like indefensible intrusion into the privacy of others, but when you see the films, you can understand why the families involved gave permission for the material to be shown. For no written case history, no matter how carefully it is worked up. can ever convey what the troubled child is really like, or how his mother sounds when she talks about him, or just what it is the psychiatrist does that helps.

One film was especially moving: A fraid Of School, which showed good parents baffled by their little boy’s fear of leaving his mother. With the help of the psychiatrist’s questions they were able to trace the beginning of the trouble to the death of their eldest child. In another film. Girl In Danger, the viewer could see through the clinician’s eyes the effects of therapy on a disturbed child; a girl of 13 who came on in the earliest scenes acting like a sophisticated 17-year-old and ended up — much improved — acting like a rather confused 12-yearOld. JOCELYN DINGMAN 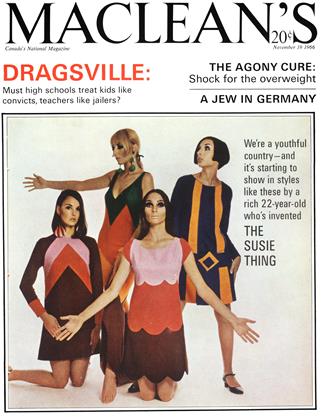