SEVERAL MONTHS ago J. C. McRuer, former Chief Justice of the Ontario Supreme Court, startled the American Bar Association by declaring that law and justice are not synonyms, and that so-called disrespect for law may actually express a burning desire for justice. Some laws are forced on society by legislators primarily concerned with rules; some are the legacy of an outmoded era or a shield for privilege. To get respect, law and order must deserve it.

Canadians have not waited for Mr. McRuer’s imprimatur. Our primitive, punitive divorce laws are honored not in the observance, but the breach, and occasionally with the advice of counsel; the ludicrous liquor regulations in Ontario are a “dead-letter” concession to the church; statutes relegated to obsolescence u'ould fill a library.

Civil disobedience, however, is not a covert, clandestine and casual compromise engaged in for pragmatic convenience. It is rather public, planned defiance of legal authority — a confrontation on the ground of principle. A well-known professor at Cornell University, Harrop A. Freeman, places the total pattern of civil disobedience, beginning with Gandhi, “in the democratic tradition — not anti-law, but within the law.” The obligation to obey government, he says, is not absolute but relative, and allows for some forms of non-violent challenge. For these reasons I think there are situations where civil disobedience cannot be avoided and the war in Vietnam is one of them.

The classic spokesman for civil disobedience in North America was

Henry David Thoreau. He spent a day in a New England jail more than a century ago because he withheld his poll-tax in protest against the Mexican War then being waged by the United States. Abraham Lincoln voted against that war in Congress-—but presumably he bowed to the majority. Thoreau refused.

To Washington and Ottawa, then as now, law and war are self-justified, and exert authority by their mere existence; once the nation is at war, everyone must obey. Yet the whole moral basis of the Nuremberg trials was the higher obligation to one’s conscience rather than superior “orders.” Nazis w'ere hanged because they did not disobey when their government demanded them to commit crimes against humanity.

To many United States citizens the military intervention in Vietnam is an inexcusable moral blot and a dark mushroom cloud over the future of civilization; to many Canadians, their government should have nothing to do with it. But the Vietnam war is a historic situation, challenging not only our southern neighbors, but us — for we must decide the degree of our partnership (or complicity). How are such “situations” created?

Read The Guns Of August and learn how World War I started — in the twisted egos, the vanity and powerthrust, of a few monarchs and prime ministers: human beings all of them. History is not written by the hand of God on Capitol or Parliament Hill — as the Ten Commandments allegedly were on Mount Sinai. Today, more than ever in recent times, and despite

democracy, it is “the lengthened shadow of a man.”

The vast carnage of World War II escalated from the fevered psychoses of Hitler. The verve and voice of Churchill bore Britain through the blitz. Pope John steered the church into the cleansing winds of change. The current political cleavage in Canada is less a conflict of party policies than a vendetta among aging party leaders. And Lyndon Johnson, after his election on a peace platform, has chosen to contain Communism and China with the mightiest destructive weapons ever controlled by any man. (Whether he consciously precipitated the war, or by a series of decisions put the United States in a position whence it could not “honorably” extricate itself without war, the result is the same.)

Popular suffrage does not render our rulers less fragile! If anything, election by vote of the people may enhance the arrogance of power — especially after a landslide victory such as Johnson’s in 1964. And the ability of a man to get elected has reverse relationship to his ability to govern. The road to the presidency of the United States, and the prime ministry of Canada, is not usually

paved with impeccable integrity, compassionate sensitivity and uncompromising humanity, particularly as electoral campaigns become increasingly expensive in time and money. A wheeler-dealer does not attain wisdom or transcend mediocrity by garnering votes. And, as Mr. McRuer clearly implied, his words do not become sacrosanct by getting themselves printed in a statute-book.

Knowing that individual persons run things, shall we abdicate the responsibilities of supposedly free men and bend to their power — or recognize their imperfection, and assert our own individuality?

For centuries political science and religions have been trying to define the criteria of just and unjust wars. The distinction is legitimate. In my opinion the Vietnam war belongs in the category of unjust wars — and I prefer what Senator Fulbright calls “the higher patriotism” of dissent rather than Lyndon Johnson’s angry effort to brand it treason.

Not that civil disobedience is sure to be effective. Thoreau did not end the Mexican war. Nor would a stint in jail prove the validity of anti-war protest. Martyrdom for a cause does not endow it with rightness; millions of people have died for some infantile superstition. But civil disobedience can remind the juggernaut of history that it is guided (or misguided) by mortal men subject to error, and it will keep the issues alive.

The stark, elementary fact is that the issues involve the survival or decease of what we somewhat euphorically call civilization. Therefore they may conduct us to a crossroads where no man worth his spark of life can longer endure the shame of saying yes. If and when that point is reached I hope many Canadians make such a choice and demand it of their government. As a supposedly sovereign member of the Western alliance, it dare not remain aloof from a moral debacle which can bring the nuclear apocalypse. 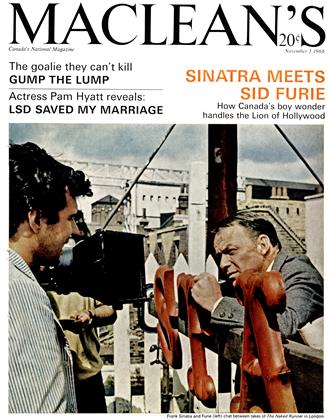