BOBBY KENNEDY’S response to Maclean’s criticism of his implication that Canada is neutral in the Vietnam conflict (Bobby Kennedy Replies With The Words Of A Dove, Editorial) is exactly what one might expect from an American politician—a lot of equivocation and doubletalk. What Kennedy should have done was stand pat on his neutrality statement. or gone even further and accused Canada of being pro-Communist. Whether Canada likes it or not. Uncle Sam is fighting for Canada’s interests as well as all the Western powers’.

* Three cheers for Senator Robert Kennedy. If Communism is not contained in the Asiatic theatre, we may have to fight it on our own doorstep.

You help demean us as a people by cries of printed joy over the Canadianism of hockey’s Gordie Howe and Saskatoon’s tribute to his skill (Gordie Goes Home). Skill, yes; Canadianism, no. Howe is one of countless Canadians who turned his back on us. It is cheapening, humbling, humiliating and shameful for magazines, newspapers, citizens or anything else to salute as Canadians those who were once of us but walked away. We even claim in the case of the attractive Dutch girl who went from Toronto to Bulgaria to win a dancing prize, that she was a Canadian. She was not; never had been, never intended to be. A Canadian is like a tree. It is or it is not. Howe is not.

As one who witnessed South Africa’s slide into a fascist state, I found Dr. Helen Reid’s description of The Land Where Fear Lays Siege chillingly accurate. In a world that is slowly recovering from the horrors of Hitlerism, South Africa is now the only country led by a professed Nazi. Dr. Reid's article should be a warning to all Canadians against the dangers of racism and injustice. ,— ED MAY, VANCOUVER

While the article on Governor General Vanier ("Their Exes’’) is a well-deserved tribute to a great Canadian, 1 am sure he would be the first to renounce the position of “head of state” which writer Jeannine Locke has ascribed to him. Our head of state is the Queen of Canada; His Excellency is her representative, and nothing more — or less.

lan Adams and Desmond English (For 183 Days — Showplace Of The World: Expo 67) made a very interesting expose of what will take place. But the section titled The Fly In Expo’s Ointment is misleading. As an entomologist employed by the Quebec Department of Agriculture on the caddis fly (shadfly) investigation for the benefit of Expo 67 since 1964, 1 wish to state that tests are not. to my knowledge, being carried out at Expo site with an electronic beam, as the article states, nor with any other physical means of control other than the use of mercury-vapor light traps for insect population studies and partial abatement. Our studies of the caddis-fly problem on

the Expo site have shown that the situation in 1967 may not be as serious as was previously thought. The principal breeding areas (shallows) in the St. Lawrence River, below the Victoria Bridge, are now mostly covered by the new islands and the Seaway site. Moreover, daily captures of adult aquatic insects reveal that active insects may cause some nuisance only during relatively few and

Once a judge always a judge?

J. V. Clyne (The Boss: Who Needs Love?) is a telling commentary on platitudinous ethics and principles as voiced by the self-righteous who have the economic or other power to be dogmatic about them. It also points up the paucity of method in this country for selection and control of the judiciary. There is an implied duty, stronger than mere tradition, that an appointee to the bench should not shuck his very adequately remunerated responsibilities for a bigger buck. For one to do so is patently demeaning to his office and

How to jolt the sniffers / “A mental kick in the brain"

those of the judiciary who keep faith to retirement and properly earned distinctions.—D. GARNET MCKENZIE, VANCOUVER

Reward for a strikebreaker

lan Mayer writes about My Life And Hurd Times As A Hospital Strikebreaker in Quebec. He undoubtedly did a fine job

of strikebreaking and should be rewarded accordingly — with one of those $60-aweck positions.

* Disgusting. Docs Mayer think that a $8-$ 10-per-week increase over 30 months on a rate of $60 is a decent wage for a man doing what Mayer admits is unpleasant work? I think it is amazing that

these workers put up with these substandard rates for so long before resorting to strike action.

Put a smell in a sniff

To help put a stop to glue-sniffing, Earl Damude suggests in his column. What’s

Happening In Medicine, that retailers be required by law to keep records of the names and addresses of all purchasers of model glue. This is ridiculous. Let’s put the responsibility where it belongs — with the parents. Please do not add further to the many problems encountered by Canada’s long-suffering small retailers. - MRS. J. ATHEY, TORONTO

* The smart and effective way to stop the business is to require manufacturers to put a harmless additive in the glue — something that will give off a foul smell or cause nausea if sniffed at close range. People are protected from leaking gas in this manner.

In Walt McDayter’s Canadianecdote on Nils Szoltevcky von Schoultz. The Polish Don Quixote Who Came Charging Into Canada, it is stated that Von Schoultz, as a final gesture of repentance, willed £400 to the widows of the Canadian militiamen killed at the Battle of the Windmill. It might be added that Von Schoultz obtained the money from his U. S. Patent No. 298, dated July 29. 1837, on salt production, thus making him probably the first engineer of Polish origin granted a U. S. patent. Von Schoultz was trained in Poland as a chemist, and his family was linked with salt mining. In 1830 he fought in a Polish uprising against Russia, having a rank of a major. Donald Creighton in his classic biography of John A. Macdonald makes clear that although Macdonald drew up Von Schoultz’s will, he was not his defense council.

I was greatly moved by The New Morality, by the Rev. Ernest W. Harrison. It gave me a sort of mental kick in the brain. - MARIE A. TWEET, VICTORIA

T The Rev. Mr. Harrison’s pastiche of vague, sentimental “New Morality” is too easily used to rationalize short-term goals (such as instant sex ) of an affluent society. The New Moralists set up their opponents as straw men to whom an unbending view of human frailty must be falsely ascribed. The danger of the New Morality is that it substitutes a tortured and reverse legalism for the old legalism it criticizes. Harrison is right in thinking that today’s young people are often remarkably compassionate. Yet the vague meanings that many have been taught to apply to “love” lead to much apprehension, fear and doubt.

4? He offers us no definition of the key word “love.” Yet he assumes deliberately that it will be understood to mean what St. Paul meant by “agape," which we may translate “selfless devotion.” If he really believes that the average teenager under the stress of passion will so understand it, he betrays a degree of naïveté which in a man of 50 is almost beyond belief. — w. A. FERGUSON. VICTORIA

T In singing the praises of situation ethics, the Rev. E. W. Harrison has attempted to pawn off a jaded caricature of traditional Christian ethics under the loaded designation of the Old Morality. He does this by preempting the concept of love for the New Morality and hanging traditional morality with the legalism of life by the letter of the law, a sort of rule-book Christianity. Whatever may have been the shortcomings of those who

Enlist now—and be a strikebreaker / While Pat burns

espoused traditional ethics, it must be said that the concept of love is at the heart of Christian morality and always has been. - REV. TYMEN E. HOFMAN,

>k Harrison is so sensitive for his New Moralists that he cannot bear them to feel the pangs of guilt. But to make St. Paul a sponsor of amorality is surely to push this argument to the limits of absurdity. — D. EDMOND. VANCOUVER

Society has rights, too

Rabbi Abraham L. Feinberg makes some interesting comments in his Argument, Civil Disobedience Is Sometimes More Thun a Right. Johnson’s War In Vietnam Makes It An Unavoidable Duty. But the individual owes more to the community than is already recognized. Under modern conditions he is too much inclined to take for granted what the state does for him. and to use personal security and liberty of speech which it affords him as a vantage ground from which he can in safety denounce its laws and repudiate its authority. He assumes the right to be in or out of the social system as he chooses. He relies on the general law which protects him, and opts out from some particular law which he finds oppressive to his conscience. A society would no longer exist in which every man should claim the right of unrestricted disobedience to a law which he happens to think wrong.

All work, no fight

Re your Editorial, How We Might Have Stopped The Rail Strike In Its Tracks: What versatile armed forces Canada will have, to be sure, if Maclean’s has its way! Join the army, lads, and receive compulsory training as: (1) hospital laboratory technicians; (2) nurses; (3) postoffice employees; (4) longshoremen; (5) St. Lawrence Seaway pilots; (6) any other workers considered to be engaged in “essential services.” Military duties? Don’t mention them!

Re Susan Dexter’s article on hotliner Pat Burns, The Mouth That Roars: My complaint is that Miss Dexter failed to suitably praise or bury our Caesar; she merely blah-ed him over a few columns of print. He deserves better than that. 1 wish we on the west coast had him back again; and failing that, that someone would write a factually pertinent article showing how much magnificence clay feet can sometimes support.

Re Robert Thomas Allen’s Let’s Quit Worshipping The Kid With A B.A.: This is one student who hopes to obtain his

BA in May of 1967 who agrees wholeheartedly with Robert Thomas Allen's sentiments. A blow has been struck against the arrogance and smugness of the “higher-education” clique.

* A most timely and amusing comment on a highly vicious and invidious practice. not only denying youth seeking

work sans university degrees an equal opportunity, but the country of much latent potential talent. Such questionable requirements and artificial devices in a great number of instances are merely shams devised to mask inability to make personal decisions on both the merit and ability of the job applicant, unless he comes armed with the required type of passport.—J. F. HORNE, BRANTFORD, ONT.

Cheers for Robert Thomas Allen for his Argument attacking offensive city noises. Could he also include in his list of offenders: dogs that bark hours on end, sometimes in the wee small hours; and people who come home in the middle of the night and bang all four car doors, sometimes twice for good measure, and rattle their garage doors as though there is a miniature earthquake in the neighborhood? 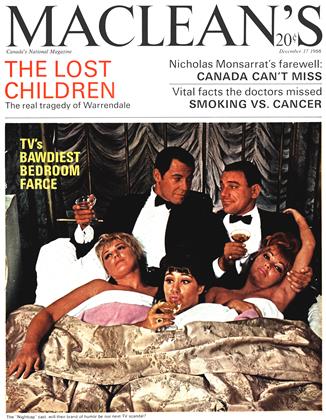