The tax burden on working wives: outdated and unfair December 3 1966

MORE THAN A MILLION married women are now at work in Canadian business and industry. They and their families are the victims of an economic injustice which is a relic of the Victorian era. It should be changed.

We refer to the income-tax regulation that refuses credit to a working wife for the expense of household help — without which she usually cannot hold her job. The regulation is outdated, uneconomic, and unfair. It is based on attitudes and customs of the 19th century, when male lawmakers believed a woman’s place was in the kitchen or the nursery.

In the 19th century, that’s where women were. But in Canada today there are 1,100,000 wives in the working force. More than one quarter of all married women between 20 and 64 have jobs.

Social attitudes have changed. The numbers of educated and professionally trained women who are competent to do a job, run a house and raise a family have vastly increased.

We are facing a serious shortage of teachers, nurses, doctors. We have great numbers of women, trained at public expense, who are not using their skills during their most potentially productive years. Right now we have to pour huge sums into university development to provide for twice as many students during the next decade. We will need the services of the women graduates in our work force, particularly in medicine and education.

When a woman works, she pays income tax. Her husband’s tax increases; he loses his exemption as a married man. If in addition she must pay a housekeeper, cleaning woman or baby-sitter, there is little left of her pay cheque and little incentive to work.

The working wives should organize and raise a row over this absurd discrimination against their sex. Our lawmakers would be wise to remember that working women — and their husbands — have votes. 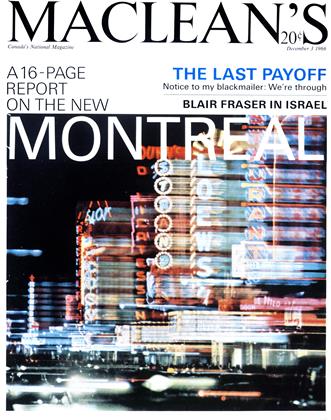