FEW CANADIANS CAN share the agonizing American dilemma over Vietnam, which Ian Sclanders reports from Washington and New York on page seven, but the few who do are heavily concentrated in Ottawa. It is not, of course, the agony for any Canadians that it must be for Americans, since no Canadian is either killing or being killed in Southeast Asia, but for Government officials, ministers and even private MPs it is painful enough. Both the major political parties, and the civil service too, are deeply divided on the question of support for American policy.

Many a Liberal, and many a civil servant, silently agreed with opposition leader John Diefenbaker when he denounced the CBC for “Brainwashing the Canadian people” with programs that denigrate “United States citizens who are dying over there for you and me, for that is what they are doing.” The men who

endorse American policy include several who have had recent experience in Vietnam, and have seen the bloody mess out there at close range.

On the other hand many conservatives and other civil servants share the view expressed by NDP leader Tommy Douglas: “We believe the policies pursued by the United States in Vietnam are wrong. We believe they are legally indefensible and morally inexcusable.”

Prime Minister Pearson probably voiced the majority opinion when he applauded the very recent peace efforts of the U. S., but pointedly refrained from mentioning the military efforts that preceded and followed the “peace offensive.” Of the recent peace offers the PM said: “1 believe these offers are genuine and sincere and should be supported by all who believe in the necessity of bringing the fighting to an end.” But he gave the impression of supporting the whole of American policy with reluctance, and with deep misgiving.

Canadian misgivings came to the surface in an incident just before the turn of the year. De Havilland Aircraft of Canada is trying hard to sell its new Buffalo plane to the U.S. army, which is trying out a few Buffalo prototypes in Vietnam. Parts for the new aircraft are sent from Toronto to a military base in the U.S. and thence shipped by MATS (Military Air Transport Services) to Saigon.

Recently the enormous build-up in the volume of supplies carried by MATS has imposed a delay of several weeks in the shipment of Buffalo parts from de Havilland’s Toronto plant. The company offered to send the parts by commercial air freight direct to Saigon. This would require an export permit (which is not required for military shipments to the U. S., because of the production-sharing arrangements between the U. S. and Canada) and discreet inquiries were made in Ottawa to see whether such an export permit would be granted.

The answer came straight from the desk of external affairs minister Paul Martin: “Absolutely Not.”

Martin and his officials earnestly explain that this refusal did not imply any hostility to the United States, or lack of sympathy with the objectives of American policy in Vietnam. It meant only, they say, that Canada as a member of the International Truce Commission in Vietnam wants to avoid any overt commitment to either side, in the hope that a moment may come when Canada can offer acceptable mediation. Also, they explain, it is standard Canadian policy not to send arms to any “sensitive area”— e.g. close scrutiny is now being given to any military orders from Moslem countries, lest they be sent on to help arm Pakistan against India.

But when all these excuses have been made, it is still obvious that Canadian support for the U. S. in Vietnam is unenthusiastic.

as to advise unconditional withdrawal from Vietnam. Without quite accepting the “Domino Theory” they are nevertheless convinced that American retreat would be a catastrophe for free Asia, and would be followed by communist victories in most other Asian countries. But the prevailing opinion in Ottawa seems to be that the so-called “Peace Offensive” could have started sooner and should have been kept up longer, that American efforts toward negotiation have been less strenuous than the efforts toward military victory, and that the peace effort rather than the military is the one that should be redoubled.

This leaves another important question unanswered: What is the most effective way of conveying this opinion to Washington? Prime Minister Pearson’s public request for a “pause” in the bombing, made at Temple University last May, apparently did no more than annoy President Johnson (even Ottawa finally admitted this, despite early attempts to believe he hadn’t really been annoyed at all). During the recent and genuine pause, from Christmas Eve through January, there were repeated private suggestions from Ottawa to Washington that the cessation of bombing should be continued indefinitely.

Editorial pressure has been rising for a Canadian declaration of some kind, a clear definition of Canadian policy. But this assumes that a clearly defined Canadian policy exists. So far, there is very little ground for this assumption. BLAIR FRASER 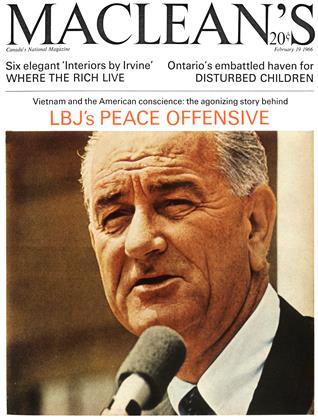