THE WORLD IS FULL of spies, if we can believe the people who think they know. At the moment the world is also full of spy movies, and yet Allen Dulles’ statement that “intelligence is the least understood and most misrepresented of professions,” still applies. The Bond saga continues with Thundcrball to make spying the most glamorous profession in the world, The Spy Who Came In From The Cold makes it the dirtiest, and Where the Spies Are, like most entries in today’s biggest box office battle, plays it safely down both sides of the street.

A comedy with implications — but not a message — The Tenth Victim takes the spy syndrome to its furthest degree. It supposes a society where each man can be his own secret agent in an international, organized hunt. All members of The Hunt are licensed to kill, and the one to complete ten hunts — five as victim, five as hunter —becomes society’s decathlon darling.

According to the theory, this releases man from wars by providing a legal outlet for violence, and has the

added benefits of preventing overpopulation and providing entertainment for the masses. It’s also a very democratic system of star-making since the computers in Geneva make no distinction of race, class or sex in choosing who shall hunt and who be chased.

But director Elio Petri did and his choice was inspired. Ursula Andress is the hunter, irresistible in her twin-

barreled bra, and Marcello Mastroianni is the sly victim. War of the sexes? Yes, since inevitably they fall ■pf-Jove. But also a far-out comedy of manners as Ursula prepares to knock off*her victim, American-style, in the middle of a commercial (this murder comes to you courtesy of . . . ) Mastroianni retaliates by preparing to dispatch her in a Roman bath with an alligator as swimming partner.

One of the staple pleasures of movies has always been the element of surprise, but surprises have become much rarer since producers took to hedging their bets with best-sellers. The Tenth Victim, fortunately, is an exception. Director Elio Petri produces one surprise after another as he races his characters through a wild mixture of pop-op interiors, and exteriors ranging from the glories of ancient Rome to the twentieth century. The color photography is another delight: by turns cool and classical or rich and opulent, it’s a perfect expression of futuristic fantasy.

JUDGING BY ALL the gadgets sold under the 007 label (are you woman enough to give him 007 . . . deodorant?), James Bond is obviously the favorite fantasy figure of the moment. But Thunderhall indicates that the very popularity of Bond has turned into a handicap. This is Terence Young’s third time around and he’s obviously straining mightily to squeeze a few more surprises out of the formula.

Most of the sequences take place underwater as Bond attempts to rescue a pair of stolen atomic bombs from Largo, a ruthless agent for .SPECTRE. Apart from an unlikely underwater encounter between Bond and Largo’s girlfriend (Claudine Auger), there is no real novelty. The wet suit fight sequences are a little more elaborate

than the ones on television, and the killing a little gorier in full color. The backpack jet, too, was familiar through the newsreels, though 1 suppose it does add something to Bond’s superhuman image to show him as master of air and sea as well as on land.

THE MIDDLE - OF - THE - ROAD ENTRY, Where The Spies Are, is a mildly entertaining mixture of gimmicky weapons, exotic locations, violence, and Françoise Dorléac. Dr. Jason Love (David Niven looking rather frail for the job) becomes an amateur agent and so escapes the charges of incompetence or immorality. He may kill a few people, but his real job. after all, is saving people’s lives. Technically inferior to any of the Bond sagas, the picture is equally unbelievable despite a few cynical jokes at the expense of spies. Canadians, however, may get a kick out of seeing some supposed Mounties burn down their Regina Lake station to rescue Dr. Love from the Russian Dove of Peace plane. “I know 1 voted for this government,” says one loyal type, “but this is crazy.” He can say that again.

WHILE SHOOTING The Spy Who Came In From The Cold, director Martin Ritt confessed that when he bought the runaway best-selling novel by John Le Carré he thought he was getting a “nice little melodrama.” By the time the picture was finished he decided he was really making an exposé of false glamour surrounding spies. I'll buy the first version. Spy is a nice little melodrama, one of the best I've seen in a long time, but its grey understatement is just as phony as the exaggerated exuberance of Thunderhall.

Richard Burton finally comes into his own as Alec Leamas, an agent who pretends to defect to the East, only to discover that his boss has used him as cynically as if he were an enemy agent. Burton’s Leamas is a man romantic enough to care, but smart enough to appreciate fully his own mean fate. Oskar Werner triumphs again as the Jewish Eastern agent, Fiedler; while Clair Bloom, believe it or not, is quite possible as a card-carrying librarian. 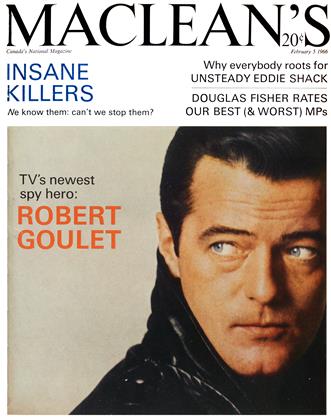