I DON’T LIKE Truman Capote’s highlypublicized new book, In Cold Blood, but I am in a dissenting minority. Most reviews of this account of a multiple murder and its consequences have been anything from favorable to downright laudatory. And In Cold Blood is doing so well financially that according to The New York Times it “seems already on its way to making more money more quickly than any other book in the history of publishing.”

The phenomenal best - seller tells how, on a night in November, 1959, near the little Kansas town of Holcomb, young Perry Smith and his

friend Dick Hickock killed four people — a prosperous farmer named Clutter, Clutter’s wife, and their teenage son and daughter. The young men had heard that Clutter habitually kept several thousand dollars in a safe in his big farmhouse, and had planned to make him open the safe; after which they would kill him and everyone else in the house, thus leaving no witnesses. But it turned out that Clutter didn’t have a safe, and that the

victims had very little money on them; so the killings were as senseless as they were brutal.

One fault of In Cold Blood, I think, is that it gives the impression of being inordinately long, although in fact it isn’t. But a far more serious fault is that in spite of the overabundant coverage of the murder, the murderers, and the way the two were finally found and convicted, the picture that emerges is curiously incomplete and superficial. It’s as if Capote had failed to see some things most people would consider important, and had seen other things most people wouldn't have thought worth looking at.

For example, he has a great deal to say about the blameless and indeed admirable home life of Alvin Dewey, of the Kansas Bureau of Investigation. Since Dewey headed the team of detectives who solved what seemed at first a case in which there were no clues whatever, he certainly deserved extensive notice. But such irrelevant details as an itemized list of what Dewey and his wife ate for dinner one night do nothing to further one’s comprehension of him, either as a private person or as a detective.

There are hundreds of other equally irrelevant details in this crowded book, together with hundreds which are not only relevant but strikingly effective. Yet though Capote has included far too much, he has left out one thing that could conceivably have helped to put the murderers in better perspective. He never examines the possibility that they were homosexuals —a possibility implicit in their whole relationship. And because he is so clearly determined to portray them in depth that nothing concerning them is

too trivial to escape his attention, it’s hard to understand why he ignores this potentially significant point.

What puzzles me even more about In Cold Blood is why he chose to write it in the first place—a choice he made so quickly that he was at the scene of the crime three days after the bodies of the Clutter family were found. Multiple murder isn’t at all the kind of subject that I should have supposed would attract the notably gentle author of Breakfast at Tiffany’s. Nor should I have supposed he would be captivated, as he makes it plain that he was, by the smalltown Kansans he met while he was doing his research, which went on intermittently for six years. Perhaps both the Kansans and the killings had for him the attraction of the opposite: unsophistication in contrast to his extreme worldliness, and gory violence in contrast to the marked non-violence of his nature.

I think he may also have been attracted, at least in the beginning, by the idea of treating the murders and their consequences as a sort of exercise in pop art. He soon became emotionally involved, and as he said in an interview published in Saturday Review: “The book wasn’t something reconstructed from some great distance. I did it right along as it was happening. 1 lived the whole thing.” But there is a mannered contrivance about In Cold Blood—the elaborate underlining of reality which is found in popart paintings of a can of tomato soup or a shiny hubcap.

I don’t doubt Capote’s sincerity. He had genuine sympathy for the victims, for their friends, and even for the murderers. It’s evident that he really liked the townspeople and the farmers. Yet somehow the book doesn’t ring quite true. Maybe he didn’t try hard enough to get away from Tiffany’s. He most assuredly didn’t try to edit out the superfluous and the over elaborate. If he had, his “nonfiction novel” as he calls it would neither be nor seem too long, but it might well have been twice as good. 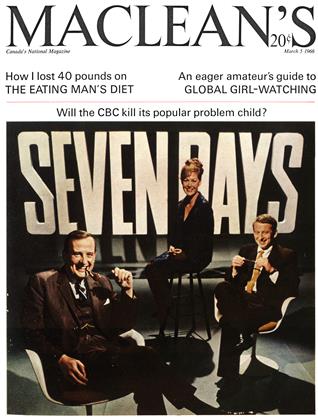