THE WEATHER WAS slushy and unpleasant in Ottawa last Christmas Eve. Jock Turcot, the twenty-two-year-old president of the University of Ottawa student council, and his girl friend, Louise McEntyre, went to confession about 10 p.m., and then to a special midnight mass for the foreign students at the university.

Attending the mass wasn’t part of Jock’s duties as president, but he stayed in Ottawa rather than going to his own home seventy-five miles north of Montreal simply as a gesture of friendship to the foreign students whose families were thousands of miles away at Christmas.

After mass, Jock and Louise briefly attended a réveillon, or midnight supper, for the students, and then went on to her home, where they had a private celebration with some close friends.

His mother was asleep at St. Charles, Que., when he phoned about 4 a.m. to tell her he would be home in the early afternoon.

It was still drizzling outside when he drove Louise’s car to his boarding house to start wrapping presents for his family — a rag doll for his four-year-old sister, some china for his mother and father and various small gifts for his nine brothers and sisters — and packing his belongings for the holidays. He included two books he was eager to read, Schull’s life of Laurier, and Sorenson’s biography of Kennedy.

Shortly after 8 a.m. he was back at Louise's house. After breakfast they started out for Montreal — Jock and Louise in the front seat, her sister Lynn in the back. By that time the drizzle had turned to snow and the streets were filmed with ice. Louise was afraid to drive, so Jock took the wheel.

Dinner was almost ready at the Turcot home in St. Charles de Mandeville when a police car drove up at 4 p.m. After confirming that he had a son named Jock, the policeman asked Mr. Turcot to phone the local detachment. That was how the family got the news: at noon, on the icy crest of a hill outside Dorion, Que., there had been a collision. Both cars were virtually demolished. Jock was dead, his chest crushed by the steering wheel: Louise was in hospital with multiple fractures and a concussion. Her sister Lynn was in shock, but otherwise uninjured; none of the seven people in the other car were seriously hurt.

Francis James (Jock) Turcot, the sunny, sandy-haired, intense boy with blue-grey eyes, was just one of the 4,800 people who died on Canadian streets and highways in 1965. In many ways, his death was no more — though no less — tragic than any other. But not long after his death, three unusual things happened.

First, his funeral drew a procession of cars a mile and a half long north into the Laurentians, to the sleepy sawmill town of St. Charles. About two weeks later, twelve hundred students and professors attended a second service at his university in Ottawa. Two students — one English, one French — read excerpts from his speeches in both languages: another played a guitar and the assembly sang popular ballads which Jock had enjoyed, for the students organizing the service had rejected the idea of a funeral mass as too sombre. What they held instead was a service of thanksgiving. They were thankful that they had been able to know

Jock Turcot. In a third tribute, the student council set up a special memorial fund in his name to build the student social centre that had been one of his pet projects.

What kind of boy was Jock Turcot to rate such tributes from so many people? To answer that question, I spent two weeks talking to his family and many others who had known him. I discovered that he was, in many ways, just an ordinary boy. He hated to get up in the mornings. He romped with his brothers and sisters. He loved hockey and campus politics. But most of all he had a great enthusiasm for life, and an unvarnished idealism that sometimes embarrassed his elders. There was something about him that convinced people he was destined for a career of great distinction.

It was apparent to Mrs. Geoffrey Andrew when Jock first arrived in Ottawa in 1963 to board with the family in return for teaching French to their children. Mrs. Andrew — her husband is executive director of the Association cf Universities and Colleges of Canada — at first decided that Jock, because of his high marks, was an academic grind. “But I quickly revised my opinion of him academically,” she says. For Jock was more than a good student. He was a crammer of rare skill — the sort of student who can let a course slide for weeks, then recover brilliantly with a single overnight study session. It was lucky he had this knack, for by his second year of law he was president of the student council, a dedicated hockey player, and an active social success.

BUT FOR THE BIG mover on campus, Jock could be surprisingly ingenuous. Once he phoned a classmate, Suzanne Labbé, and in a conspiratorial way asked her if she would do him a favor: would she teach him to waltz in time for the Law Ball? All through the lesson. Jock, his teeth set rigidly, his body ramrod straight with determination, would ask, “How do I look?” He almost demanded a complimentary answer as he counted one-twothree aloud and awkwardly stumped around the room.

Most of his friends, though, remember a less social Jock. Louise McEntyre still keeps the contemplative letters that Jock wrote while he was on a Roman Catholic retreat two years before his death. In them, he emphasized his desire to serve his country: “I should be a wellformed person, for in everything you do today, you have to be prepared, especially in politics. You must have a vast, broad view of things in order to govern people.”

While Jock’s ambitions were put rather loftily, his mother remembers him as “just a natural boy ... He was gifted, but he had his faults — he was over-enthusiastic, and maybe not realistic enough, but he was pretty serious and extremely dedicated.”

His father is a leading citizen of St. Charles where he runs a sawmill, the only local industry. So his shock was understandable when Jock, who was still a teenager, came to him with a strange proposition. Jock wanted to go to jail. “He kept on trying to figure out a way to get into jail without commiting a crime,” his father remembers. “He felt he could do more to help rehabilitate the prisoners from inside

the jail than a social worker could do working from the outside.”

The dedication was still there in early 1965, when Jock was selected as a compromise candidate for student-council president. His predecessor had lost the job in midyear because of a dispute with the university administration. Charges were prevalent that the Oblate Fathers, who were then running the university, were blocking any student voice in university control. Yet by the time of Jock's death a year later, there was unity on campus. “He had the gift of being able to relate with all the groups and gradually to muster all their strengths,” says father Louis Raby, the university chaplain. By adopting a firm line with the administration without selling out to the campus rebels, Jock managed to win the students a voice in administration policy, says classmate Pierre Gravelle. “The administration would never now make a decision affecting the student body without consulting student leaders,” he says.

During the eighteen months Jock lived with the Andrews, they were impressed by the struggle going on inside him. Jock had an Irish mother and a French father, and, as Dr. Andrew saw it, “Jock found himself straddling the bicultural conflict — his own background made him struggle like the devil as he tried to remain loyal to both roots and still be a good Canadian.” But his complete bilingualism — Pierre Gravelle describes him as “neither French nor English, he was both at the same time” — led him to a position where he could argue from either side of the French-English dispute. Among the French, he’d defend the English; in arguments with the English he would defend the French.

Stewart Goodings, then head of the Company of Young Canadians, Ottawa's new peace corps, recalls attending a Canadian Union of Students convention at Lennoxville last summer: “Jock went to the convention with no ambitions. Yet after two or three days everyone was talking about him for president.” (Jock turned down the invitations to run because he felt he had more than enough work at University of Ottawa.)

Last summer, Jock worked as a researcher for the CYC. He studied the ways in which Canadian Indians could best be served by the CYC and, says Goodings, “his report had a great deal of influence over the way we look at Indians now. Jock felt, as a white, that he was inadequate to handle the Indian question, that the most effective way of dealing with Indians was to get them involved in projects — and he persuaded us to have an Indian on staff.”

Two days before the accident, Jock had taken Louise downtown to select their china pattern. She and the Turcots had wanted Jock to article with a law firm before going on to further postgraduate work. He hadn’t made any final decision, but there were indications that he had decided to article, in which case Jock and Louise could have been married.

He had already proposed once to her, but she had turned him down. She didn’t want a long engagement. When I talked to her in hospital, she was still wondering whether he might have bought her a ring.

Now she will probably never know. ★ 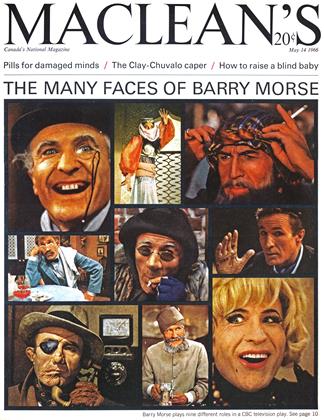