THE OSCAR is a movie in which Hollywood tries to tell more lies about itself than even the fan magazines. Spreading the scandal thickly and skillfully, it shows how stars are made by aging sexpots, bolstered up by gutless parasites, and then broken by

tyrannical clunkheads. In brief, it says the whole system stinks from stem to gudgeon. All of it, that is, except (fanfare) Tl?e Oscar (drums).

Stephen Boyd plays a villainous, empty-shelled, steel-hearted star who gets everything he wants—cars, girls, the predictable lot—simply by being meaner and sneakier than anyone else around. Everything, of course, except the Oscar. In one of the movie’s few moments of truth, Joseph Cotton defends the honor of the famous statuette, saying that whoever throws dirt on the Oscar, throws dirt on the whole motion-picture industry. And there we have it. The Oscar is no more nor less than a symbol of what Hollywood means to Hollywood.

The message varies from year to year but the basic ground rules seem to be constant. To win, a picture must 1) make lots of money; 2) be either a critical success or have serious artistic ambitions, it doesn’t matter w'hich; 3) be a star-maker or a good star vehicle; 4) must reflect credit on the industry as a whole, either by theme or through technical virtuosity; and 5) have some distinguishing heroic quality.

Judging by these rules, the winner this year should be David Lean’s film version of Boris Pasternak’s novel Doctor Zhivago. Lean has already had what some consider to be more than his fair share of the little gold men, but none of the other contenders for best picture, as I see it, has everything it takes.

A Thousand Clowns is missing that heroic quality, and besides, comedies are as rare in Oscarville as rich men in heaven. Ship of Fools would do in most respects but it hasn't been quite popular enough either with critics or at the box office. Darling is by all odds the critical favorite of the five, but its theme is a little dicey, and it doesn’t have, in compensation, the overwhelming compensation of being a smash hit, like Tom Jones.

The Sound of Music is the undoubted box-office winner, and it can also boast technical proficiency and morals beyond reproach. But unlike last year’s musical winner. My Fair Lady, it has been almost unanimously trounced by the critics.

Now Zhivago will never make as much money as The Sound of Music, or be the Darling of the critics, but it has been getting an acceptable share of both fame and fortune. Above all, Zhivago is an exceptionally heroic undertaking—in every way a challenging movie project.

To start with the physical problems were enormous: the reconstruction of

St. Petersburg/Leningrad in Spain, location shooting in the frozen desert of northern Finland, a cast of thousands, a cost of eleven millions, and three years of back-breaking, sustained, numbing effort.

In addition, Boris Pasternak's novel is oblique and diffuse. The action is not concrete and yet it touches on some of the most spectacular events in any nation’s history.

Trying to recreate the atmosphere of the most crucial period in the Soviet Union’s history—and one of the most fascinating in all of history —is no mean feat. Just imagine what a hash the Russians would make out of Gone With The Wind. National character is elusive, even when the nations are friendly, witness those outlandish German Westerns.

Lean has only partly succeeded. There's something very British about the class attitudes, and the whole approach to nature. But Zhivago is still a grandly romantic spectacular, in the best sense of all those words, and it does for snow what Lawrence of Arabia did for sand.

Lean has wisely chosen to concentrate on the love part of the story: the marriage between the poet Yuri (Omar Sharif) and his well-bred wife (Geraldine Chaplin) and his greater love for Lara (Julie Christie), one of

the rare heroines who is allowed to be both passionate and noble of soul. This is surrounded by a constantly shifting landscape—the ferment of St. Petersburg, the vast stillness of the Ural mountains, the luxury of a highsociety ball, the lower depths of a train-load of stinking refugees, the huzzahs of the partisans, and the quiet change of seasons that speak of life continuing in the face of politics. And throughout the photography is ravishingly beautiful.

On the negative side I have to admit that the movie is slow, that Robert Bolt’s dialogue sounds like a paste-up of old Russian plays, that almost everything in the picture has that second-hand air of having been learned from the art of another coun-

try, rather than directly observed, and worst of all, that Lean's romanticism is shot through with British restraint instead of those electrifying Slavic changes of mood.

But when that full moon moves out from the clouds to reveal a pack of waives baying among the birches in the snow while Yuri and Lara clutch each other close under their fur blankets, I forget all that and fall completely under the spell of Lean's white magic. WENDY MK MENER 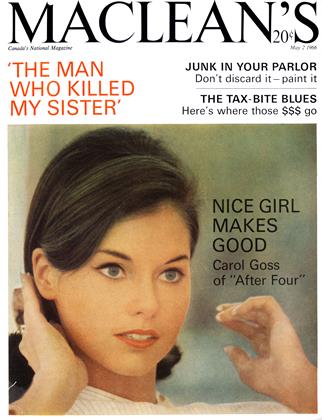