ALL RIGHT, so the Oscarcast is usually pretty boring. Is that any reason for us to come along and prove just how much worse it could be?

“I ask your sympathy,” said executive producer Thom Benson, in what must be one of the strangest audience warm-ups in the history of television. “I beg your indulgence,” he continued. “We need your co-operation for this all-important broadcast.”

Film Awards, they ran riot as of that moment. Benson was clearly preparing the audience of film professionals for the worst, and that’s just what it turned out to be.

I should say right away that Rich Little — our one-man cast of celebrities—deserves some kind of medal for the courage with which he faced a crowd that was ready to run for the nearest hotel room—prizes or no prizes—if things got too embarrassing. But somehow he managed to make everyone sit and suffer through all the mispronunciations and dead mikes if only for the pleasure of seeing his live Diefs.

During that 90 minutes of madness (couldn’t we have started off with 30?) Rich Little kept calm when all about him were losing their heads, perhaps because he never was really there. Even when he was playing straight, he was doing a Bob Hope.

Oh yes, it was a truly Canadian occasion. The English movie people were there in full force. There were so many organizations involved—the Directors’ Guild, the Canadian Film Institute, the Association of Motion Picture Producers and Laboratories of Canada—that even with a detailed program you couldn’t tell the players. Just what anyone being initiated for the first time into the mysteries of the obscure world of Canadian films was to make out of it all, I can’t possibly imagine.

The French Canadians had opted out, except for accepting prizes. Their film-makers association decided not to participate and the French network chose to broadcast a foreign film at the time. In any case the prizes awarded at the Montreal Film Festival’s annual Canadian film competition have the most prestige in Quebec.

Even more discouragingly Canadian was the announcement of the award nominations. Hollywood may be studio-conscious, but at least the people who actually do the work get mentioned. One prize-winning film, on this CBC-produced program, was introduced as follows: “Bernard

Shaw, Who The Devil Wax He? by the CBC” (Who he?). “The prize will be accepted by Vincent Tovell.” Mr. Tovell, it turned out, was not there, but even if he had been, there was no way of knowing that he was the initiator, director and producer of this particular television show, and one of our best television producers.

Other award-winners were treated to the same anonymity — all except Beryl Fox, whose Vietnam film won the most important award: Film of the Year. “She’s a lady amazon,” whispered one French director with awe, so we did have one real celebrity there, after all.

Even in the best of circumstances these affairs tend to seem a little like prize-day at the end of school term, but surely, if awards have any function at all it is precisely to focus attention on talented people—to make stars if you like. And since the television public was most unlikely to

have seen any of the films (even Fernand Dansereau, who made the award-winning feature, The Feast Of The Dead, had not seen the competing features), surely the obvious function of this “all-important broadcast”—this first chance for Canada’s growing film industry to do some image-making — was to make a big fuss over the winners, to tell the public who the devil they are and what on earth they are doing. As it was, any viewer might be excused for thinking the whole thing was a rather elaborately staged Rich Little parody of the Oscars.

To top all, the broadcast ended with a slogan invented by Hollywood to fight television: “Get more out of life, Go out to a movie.” Just where, I wonder, are we supposed to go out to, to see any of the films that won awards this year? WENDY MICHENER 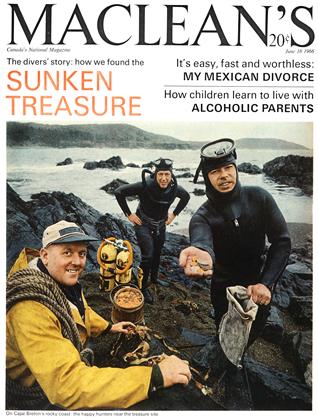