THE OLD MAN AND THE BIOGRAPHER JAMES BANNERMAN June 4 1966

WHEN ERNEST HEMINGWAY blew his brains out with a shotgun one summer day in 1961, most people were not only shocked but baffled. Why should the man who was probably the bestknown writer in the world, and who besides being rich and famous appeared to have a notable zest for life, suddenly kill himself?

His friend A. E. Hotchner gives a convincing, often moving and sometimes chilling answer in Papa Hemingway. The book is an account of the fourteen-year relationship of the two men, which was both personal and professional, since Hotchner was his close companion and confidant and the adapter of a number of his stories and novels for movies and television. Hotchner also handled some business

matters for him, and helped him with an article on bull-fighting for Lije magazine.

The reason Hemingway needed help was highly significant. The article turned out to be three or four times too long, and Hemingway found himself quite unable to cut it to the required length. Even with Hotchner’s help, because Hemingway refused to accept most of his suggestions, the cutting wasn’t successful, and had to be finished by the editors of the magazine. For by then, in the spring of 1960, Hemingway’s mind had begun the deterioration which ended in outright psychosis and suicide. Indeed there had been even earlier warning signals; and in the last part of Papa Hemingway they are made increasingly clear.

This is done, and his character and personality are evoked, through reports on his comings and goings; his drinking, which got out of hand in the final years, and on the people he drank with and what he said to them — above all what he said to Hotchner, who either made notes of their conversations or recorded them on tape. Thus what emerges is a portrait done chiefly as straight reportage, detached and frequently unflattering in spite of Hotchner’s deep and evident affection.

Hemingway is shown to have been generous, brave, timid, arrogant, considerate, selfish, affected (he often talked, for example, a kind of babytalk with tough overtones), and occasionally sententious. In short he seems to have been an eccentric bundle of contradictions who deliberately created a caricatured image of himself. Papa Hemingway is at the same time compassionate and unsparing, and it’s easy to see why his devoted wife Mary brought legal action to try to prevent its publication.

IN THE FOREWORD to Thrust and Counterthrust, a history of the various disputes over the border between Canada and the United States, H. George Classen says: “This is not a history for historians. It is meant to be read — and perhaps enjoyed — rather than studied. For this reason 1

have omitted footnotes.” On the whole he lives up to his disarming disclaimer. He presents many, though not all, of the officials on both sides as living people, rather than as abstractions of authority. A case in point is his treatment of Donald Cameron, whose qualifications for a crucially important appointment to the Rupert’s Land boundary survey of the early 1870s were that he was the son-in-law of Charles Tupper, a friend and colleague of John A. Macdonald.

Without strong political pull Cameron would never have got the job. He was moody, tactless, and had phenomenally poor judgment. Classen traces Cameron’s career down to his culminating folly in the mid-1880s, when he advised the government to start a messenger-pigeon service between Sable Island and the Nova Scotia mainland — a suggestion about as up-to-date and sensible as recommending that express trains should be horse-drawn.

A REALLY REMARKABLE book ÍS hi the Wake of the Andrea Doria, both in itself and because of the reason w hy it was written. Eugene W. Gladstone, who now lives in Toronto but was born into a wealthy Jewish family in Romania, came back with his wife on the Italian liner Andrea Doria from a trip to Europe. They survived the sinking after she collided with another ship in fog; and Gladstone’s opening chapters tell of the disaster and how he and his wife were rescued.

He also tells how the shock of the experience left him mentally disturbed (he took to thinking, for instance, that every day was Tuesday). And when he went to hospital for treatment, his doctors said it would be useful therapy to write his autobiography. He did; and this book, which cured him, is the absorbing result.

In the Wake of the Andrea Doria, by Eugene W. Gladstone, McClelland and Stewart. $5.95. 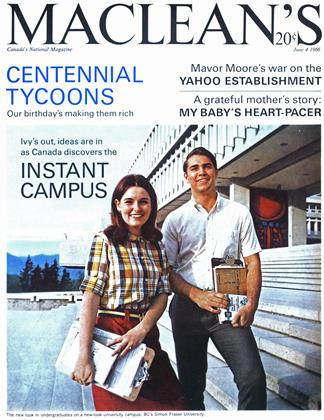