OMENSETTER’S LUCK, by William H. Gass, is his first novel — his first, mind you. Yet to my astonishment and delight I found it great in the sense that War and Peace is great.

The comparison, on the face of it so extravagant, is deliberate. No two books could resemble each other less. Tolstoy’s masterwork is concerned with matters of epic importance, and covers the whole range of society, from princes to peasants, in Imperial Russia of the early 1800s. Omensetter’s Luck has to do with the small concerns of obscure people in a little Ohio town in the 1890s. But both novels have in common, at a closely comparable level, profound perceptions of human nature, of what it is to love and hate, of the glories and absurdities of life, of defeat and triumph. And both convey these with the vitality of a fresh wind blowing in springtime.

The story of Omensetter’s Luck can be reduced to a very simple outline. Omensetter, described at one point as “a wide and happy man,” comes rattling into the town of Gilean with his wife and two daughters, in a ramshackle wagon drawn by a single bony horse; everything they own piled up behind them in an untidy heap. He gets work in a blacksmith’s shop at low pay, rents a crumbling old house, wins the hearts of the townspeople in general and the enmity of the Protestant preacher in particular, is suspected of having murdered his landlord, is

cleared, and finally leaves the town.

What happens to him, or to any of them, is not nearly as significant as the thoughts and feelings to which the events give rise. These are evoked in a flowing stream of subtle imagery, heightened by a style which is truly original, and which makes the simplest anti homeliest details seem new and wonderful. Above all there is a kind of orchestration of attitudes — the confused senility of a very old man, the timid inadequacy of Omensetter’s dim landlord, the fierce, haunted malevolence of the preacher, and Omensetter’s life - affirming acceptance of the world around him, interwoven like themes in a symphony.

This is not a novel to be read in the ordinary way; and indeed it can’t be, since everything about it is unfamiliar. You should approach it with an open mind, prepared to let it insinuate rather than state its meaning. So read it as a marvelously enriching and memorable experience.

LIQUOR: THE SERVANT OF MAN, is by Morris E. Chafetz, who is assistant clinical professor in psychiatry at Harvard, and director of the Acute Psychiatric Service and Alcohol Clinic at Massachusetts General Hospital. He is thus formidably well qualified to write about drinking and its effects, which in his opinion enhance day-today living rather than threaten it.

That isn’t to say that Doctor Chafetz minimizes the harm drinking can do. Few people have seen more of that than he has. But he has also seen that the good outweighs the harm. He dispels the commonest myths about drinking — the belief, for example, that mixing your drinks will make you drunk more quickly than if you stick to gin, say, or whisky. And with the calm, factual knowledge he imparts, it’s easier to drink sensibly and happily, free of the vague guilt so many of us feel when we settle down to have a couple or three or four before dinner or at a party.

Even if you think you have a serious drinking problem, Doctor Chafetz can help you — either by confirming that you really have got one and telling you how to go about overcoming it; or, which is fortunately much more

likely, that you really haven’t got one, and consequently needn’t worry.

In short Liquor: the Servant of Man is at once encouraging and useful. Besides that, it’s easy to understand, full of wisdom and tolerance, and often amusing. However well a person handles his drink, he can nearly always learn to handle it even better. And that is precisely what is taught by this good doctor’s good book.

VLADIMIR NAIIOKOV’S Despair is a novel about a murder, but it’s by no means a whodunit. The central character, Hermann, who tells the story, does the killing, and is uncompromisingly frank about it. He is also insane, and sees life and death in flashes of insight which are sometimes distorted, and at other limes sharp and clear. This absorbing and revealing study of demented evil was originally written in Russian in 1932, long before Lolita made Nabokov famous and time had given him increasing mastery of his art. But the present edition, translated by him, is a drastic revision done in 1965, and can therefore be considered new. 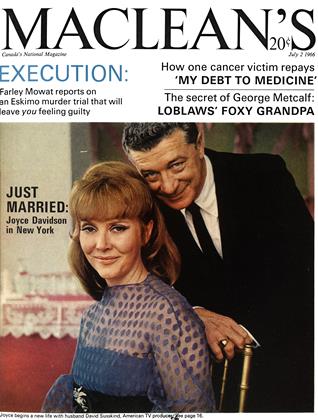