IN GENERAL., I agree with Mavor Moore's views when he squares off with If Our Nay-Saying, Doom-Crying, Short-Sighted, Penny-Pinching Culture Baiters Want A Fight — Well, They've Got It. But why doesn’t he get out of Toronto and find out what is going on in the rest of Canada? Tor example, contrary to his statement, drama is a credit option at most if not all of the high schools in Edmonton. Not all Canada is as reactionary and hidebound as our Ontario brethren! — R. A. BROWN, I DMONTON

% An accolade to Mavor Moore and Maclean’s. But let's not blame the politicians alone. Thousands of businessmen should read it. tar loo many of them have no use for the arts unless they can warp them to the sacred activities of making money.

* The terrific gap between my elderly generation and today s youthful one could not have been better illustrated than by Mavor Moore's article. Now I realize how I wasted my early years reading Caesar. Livy. Virgil. Tacitus. Horace. Corneille, Molière. Jean-Jacques Rousseau. Goethe. Schiller. Heine, etc.. all in the original, plus the English classics; viewing art in the Louvre and other centres, but now sadly out of date with regard to the output of today s artists and sculptors. Then fugaces!

* If "Mavor Moore squares off." he just might get the fight he is looking for. What does Mr. Moore want us to see.’ Is he promoting the daubs and slaps of color, the blotches and smudges of pigment. the distorted refractions of light that are presented for our edification in the name of modern painting? What does Mr. Moore want us to admire? Is he extolling the shapeless piles of solids, the formless clumps of matter, the disfigured arrays of substance that are submitted for approbation by exponents of 20th-century sculpture? What does Mr. Moore want us to applaud? Is he acclaiming the squawks and squeaks of sound, the bleats and rasps of noise, the shuddering ululations that are composed for our enjoyment as models of presentday music? If contemporary artists feel a need for public support, they would do well to prove that they deserve it. JAMES HODGKINSON, LA TUQUE. QUE.

river which already flows across the border. This will serve the double function of preventing floods and increasing pow'er production in the United States. But it won't give our American neighbors a pint more water than they have today.

I do not suppose it is any kind of a record. but I have been a subscriber to Mm lean's w ithout a break for just over 40 years. Most of that time I lived in the province of Saskatchewan.

It’s a pleasure to hear from a Maclean's "veteran." Has any other topped the 40year record?

Live right — or get out

Your Editorial Private Life In The Public Lye must express the opinion of the majority of Canadian voters. Unless persons seeking public office have the highest ideals and the ability to live up to them, they have no right to aspire to such positions. Having sought such positions and acquired them and then failing to live up to them, resignation — or failing that, dismissal — should be adamant and immediate.

Why did they laugh, Pierre?

In his Argument in reply to Jeff Holmes’ contention that French Canadians don't speak French but a language all their own, Pierre Beaudry claims that during the period he was learning English he was “constantly laughed at. pointed at and corrected, as a stupid Frcnchy.” I have never been treated in a similar way during eighteen years of speaking Dutchaccented English in Ontario, nor have I ever heard a like complaint from any immigrant. To the contrary! The easy acceptance of any accent (except British) by English Canadians is a pleasant surprise for new arrivals and is frequently remarked upon. Come on, Pierre, you wouldn’t have been just a tiny bit offensive yourself? — s. F. SMITS, OTTAWA

* The passion that Pierre Beaudry brings to the subject of Canadian French points to a systematic difference in attitude between native and foreign speakers. Each of us. as far as our own language is concerned, tries to bend his usage toward elegance as he sees elegance. Our approach to other languages is more descriptive. for we must learn the expressions that we will meet whether they are elegant or not. The English student learning French cannot be satisfied by learning just the literary language and an internationally acceptable pronunci-

ation. He needs to learn the additional forms actually heard that form part of the spirit of French, even though they are not at present part of the literary language. — GEORGE KELL. OTTAWA

Thank you for David Drake’s Argument. A Mathematician Says: Science Isn’t All That Wonderful: These Days It’s Running Laster Just To Stay In The Same Place. It is wonderful that at least one man has the intelligence and the courage to realize that science is not the solution to all our problems. Perhaps we should try to improve our ethics, which show' such painfully slow progress.

Many thanks for running that excellent photograph of the University of Waterloo Library in your report on new universities, The Knowledge Explosion. Unfortunately, to the chagrin of our librarian, the photo was captioned incorrectly as the administration building of Waterloo University. We do not have an administration building and there is no Waterloo University (there are two universities in Waterloo). — J. D. ADAMS, DIRECTOR,

In your article on the latest meteor on the Canadian political scene, federal Agriculture Minister Joe Greene (How Joe Cr eene Liggers To Keep ’Em Happy Down On The harm), you imply that the impact of this uninhibited lawyer-turnedfarmer has caught Canada by surprise. Not so his Renfrew South supporters w'ho knew that something new and even brash would be added to the halls of parliament, in his acceptance speech back in the spring of 1963. on a school platform in the town of Renfrew. Joe Greene pledged that he would be a parliamentarian to shatter concepts of all who went before him. We believed him . . . and he has. - ERANCIS B. MURIMIY.

1 found Lyn Harrington's Millionaire Among The Marxists both familiar and disgusting. I refer her, and your readers, to Escape Erom Red China, by Robert Loh and Humphrey Evans (CowardMcCann, 1962). Loh was a "national capitalist." the one that got away. His grim story is the same in outline but different in detail from Liu's sugarcoated tale. The point that is so interesting is I.oh's detailed descriptions of how he and other "national capitalists" were used as stooges to entertain and

What “capitalists” are for in China / How to bypass Reno

deceive visiting statesmen, journalists and tourists. Loh describes how the visit was rehearsed and the visitors’ personal characteristics reviewed so as to assure a smooth “spontaneous” visit. I am not denying that the revolution in China has led to advances in many fields. What I am denying is that Lyn Harrington’s article conveys a true impression of the lives of the “national capitalists” under the Red regime.

* The article gives forth the same slick propaganda that is fooling Buddhists in Vietnam.

Glen W. Davis states the case for Vietnam very factually in his Argument. Do The Americans Have The Right To Destroy A Nation Just Because The U.S. Didn't Sign An Agreement? It should be added that it was Nationalist China in the north and Britain in the south, who carried out the military reoccupation and suppression of the Vietnamese, clearing the way for French reoccupation. This was the first necessary step following the Potsdam betrayal of Vietnam. Edgar Snow gives a well-documented account of this in his The Other Side Of The River.—WALTER RATZLAFF. KAMLOOPS, BC

How about the public?

Thanks to TV critic Peter Gzowski for his 7 Days: Let’s Take It Slowly, From The Top (Reviews). If CBC President Alphonse Ouimet has so little ability to control his staff and so little thought for the desires of the Canadian public whom he serves, it would appear the time has come for him to make room for someone who would accede to popular demand. In all the furore of investigations, no mention has been made of the attitude of the general public, who apparently can be ignored.

* The CBC management has shut off an honest man’s right to speak the truth, and the freedom and right of every Canadian to see and hear the truth. This program. if it is going to continue, should be re-named This Hour Has Seven Veils.

Re your Editorial We Can End The Holy Deadlock Without Becoming Reno: I suggest there is a much more practical answer to the problem of marriage failure. Let us now begin to instill in our young people not only “flowers and sweet music” but the necessity of common-sense “guts” on the part of both parties as an assurance Reno will not be a possible necessity.

I wish to place on record the fact that my Argument on Vietnam (May 14) did not appear in the form in which I submitted it. In the first place, it was condensed, and not very competently condensed. One paragraph in the published version began with “in other words." 1 his phrase made sense in the original, but it made no sense at all when the preceding sentence had been deleted. Secondly, the article was altered. Sentences were inserted which I had not written, and which seemed to me stylisti-

cally deplorable. Words were changed. My consent to these amendments was not requested. Except when an author has approved the specific revisions prior to publication, I am convinced that to tamper with an individual’s statements and style is both unethical and impudent. — K. H. W. HILBORN, DEPARTMENT OF HISTORY. UNIVERSITY OF WESTERN ONTARIO, LONDON, ONT.

James Bannerman’s review of Mordecai Richler’s Son Of A Smaller Hero (Reviews) is curiously contradictory in its evaluation of the various characters depicted in the book. He finds the novel authentic and revealing when the author describes Jews, yet usually arbitrary when depicting gentiles. Is Bannerman

so intimately acquainted with the Jewish milieu that he qualifies in Nhis role of judging the caricatures Richler draws and concluding they are people? I believe it would be more accurate to say that the gentiles as well as the Jews in this work of fiction lack credulity. Richler paints his gentiles with honey on tissue paper, his Jews with darts dipped in acid. Nowhere in fiction can one find a truly memorable book where all the members of one group are either bad or stupid or ugly or nasty or worse. — MRS. DAVID TENNENHAUS, OUTRE MONT, QUE. ^ 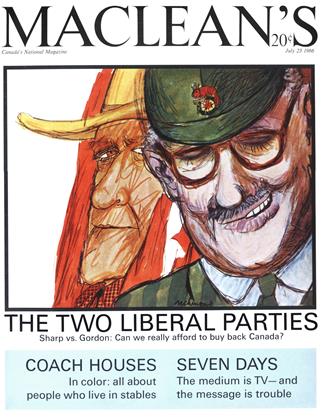