A consumer says: Credit criminals are costing the rest of us millions; present deterrents don’t work so let’s bring back debtors’ prisons

NORTH AMERICA HAS produced a new kind of criminal—the credit criminal. His billfold will carry anywhere from one to 20 credit cards all fully up to date and all frequently used. But never paid.

It is painfully clear by now that our present methods of controlling these credit criminals just don’t work. A man who writes a cheque on a nonexistent account can be haled into court on a criminal charge of false pretenses. But the credit criminal, as long as he observes one or two simple rules, can go on merrily getting into debt for as long as he likes.

Surely it’s time we became a trifle more vocal about the crime of nonpayment. Why not use the one tangible deterrent society has — the curtailment of the individual’s freedom? In a word, why don’t we bring back debtors’ prisons?

As the law and custom now stand, the deliberate credit skipper seldom, if ever, goes to jail. D. J. Sinclair, president of one of the largest collection agencies in Canada, can recall only three occasions when a debtor went to jail. Yet isn’t purchasing articles for which the would-be owner has no intention of paying merely a refinement of stealing? Emerson’s stentorian dictum “Pay every debt as if God wrote the bill” appears to have been forgotten.

debts they were after. Each year the number of unpaid bills and debtors escalates to set new records. Happily facing the challenge of an expanding market, the collection agencies are eagerly banding into national and international trade groups (latest of these is the International Collectors Association covering the United States, Canada, England and Sweden). The most revealing figure comes from a large Toronto collection agency which reports that last year it received 50,000 new cases of unpaid bills.

Despite occasional lurid stories from the bleeding-heart press, the 1966 version of the debtor bears little resemblance to the hounded immigrant saddled with engineless secondhand cars and unwanted Princess telephones. Big business—the department stores, travel and restaurant credit-card companies, the oil companies—spend far too much money creating a responsible and benevolent image to risk destroying it by hounding the deserted mother of seven or the diligent Sicilian immigrant.

It doesn’t require much skill for a debtor to avoid paying his debts. Even if a creditor succeeds in securing a judgment (and it’s up to the creditor to inform the court where the debtor lives in order to serve him—in itself nearly impossible) the chances of a creditor getting back his money are slim.

The debtor may default on his payments or he may make no payment at all. The creditor may then haul the debtor back to court for a “debtor’s

examination” at which the debtor justifies his inability to pay and answers questions about his income and business. These “debtors’ examinations” can develop into regular monthly sessions, with the same faces cheerfully appearing in court to enact their ritual penance and then depart leaving frustrated creditors behind.

The examinations are usually academic: debtors have perfected certain techniques. Property and investments are found to be in the wife’s name. The husband’s income is easily shown to be covering only the necessities. The variations on this game of “income explaining” can be developed to a high art. Toronto lawyers are still speaking in hushed tones of the tactical brilliance of one debtor who at his examination thoughtfully brought along one of his several highly paid personal secretaries to get coffees for the examining lawyer and court reporter.

If a debtor fails to appear for these examinations he can be jailed for contempt of court—although the knowledgeable debtor takes a noblesse oblige attitude to his court appearances. A county-court judge may try to scare a debtor into action by threatening him with jail — but any debtor who has come with counsel will know that this is only a bluff—

and at the very worst any competent lawyer would have his client released almost immediately.

Attitudes to credit abuse are incredibly casual. At a convention of court bailiffs in Niagara Falls last year one of the commonest stories was of the bailiff repossessing a television set only to be passed on the stair by another set replacing it. People seem to regard buying-on-credit as a rental service and see no reason why repossession of the article through payment default should prevent them from obtaining credit elsewhere.

In fact, credit abuse—like any other excess—has reached a point where it is a very real danger to our society and a danger upon which we should act.

And remember, the credit criminal hurts the pocket books of everyone, not just the individuals or stores from whom he steals. It’s no secret that just about every organization that issues credit cards marks up prices to absorb the extra money that will have to be written off as bad debts. So it is in the interest of all of us to create a strong, effective new deterrent to the credit criminal. And what better way than the sobering prospect of languishing in a debtor’s prison? 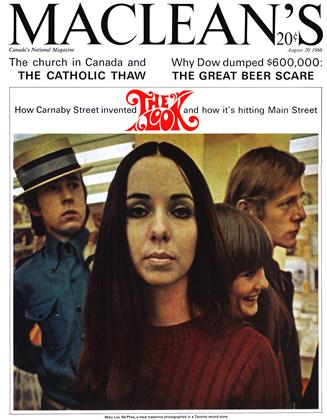