Why can't the CBC, just once, declare a late-night amnesty on commercials?

A FLOOD OF publicity predicts a “new” television season. I predict this scene: “Come out, Barbara Graham, come out!” And Susan Hayward, cornered, comes out with her hands up, to the announcement: “We will return to I Want To Live after a 10-minute break for the news."

We will all watch this scene in hundreds of variations this winter. Most adults would rather watch a good movie on television than almost anything else; and on television most movies are shown in torn fragments stitched together with commercials, station breaks and news. A movie is carefully designed to create a mood in its audience. When it is shown on television the spell is frequently broken by messages about teeth, floor wax, laundry and keeping off mosquitoes. And after every interruption poor old / Want To Live has to start all over trying to get your attention.

If you think you don’t like these interruptions, you should hear how people who make movies feel about it. “It’s uncivilized,” says Otto Preminger, who felt so strongly that he went to court to try to get the right to keep Anatomy Of A Murder from being abused on TV without his permission. He was upset because when Anatomy was shown on television in New York for the first time it was interrupted

13 times, for a total of 36 commercials. He felt no suspense film could survive this treatment. The judge, however, decided that on television it was the “custom” to make minor cuts and interruptions for commercials, and dismissed Preminger’s case.

Apparently it’s hard to get judges to take the artistic integrity of movies seriously. In California director George Stevens got an injunction forbidding the “mutilation” by commercials of A Place In The Sun. Stevens counted nine interruptions for 42 commercials in the subsequent showing, but a California judge said A Place In The Sun was so strong it could overcome these interruptions. He felt they did not substantially destroy its mood and continuity, and he found the network not guilty of violating the injunction. The average viewer, the judge said, is thickskinned about commercials. And a network lawyer claimed that audiences have been conditioned to programs cut into segments.

Television people have always treated movies with gratuitous contempt. They have laid waste a great source of potential enjoyment by treating films as if they were bolts of cloth that could be altered to fit. If a romantic mood is shattered, if suspense is destroyed, they frankly don’t care. In fact an NBC lawyer blandly informed the California court that a movie conveys no mood that can be interrupted by commercials.

I guess we could write a lot of letters signed “Indignant” without softening the stony commercial hearts of the U. S. networks or local stations in Canada. But movies on television don’t have to be bad, especially on a network with pretensions to public service like the CBC. Television doesn’t need to apologize for showing old movies. So far on television, the film repertoire of the past hasn’t been so much used up as chewed up. Surely the mass audience would respond to full-length versions of famous films treated with the respect the CBC gives to Chekhov or Shaw?

We could have festivals of Billy Wilder films, series of great John Ford westerns, Hitchcocks shown the way the master made them. They might even once in a while give us a noncommercial classic — like Eisenstein’s Ivan The Terrible, for instance, which the BBC showed recently. The films and the time are there. All that seems to be lacking is a sense of respect for movies and audience. 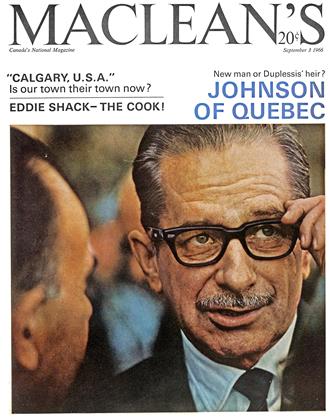