Where do little dogs go when they pass on? SUSAN DEXTER January 1 1967

Some sorrowful owners think they go to heaven. And therein lies a tale

DESPITE ITS familiarity, the scene was undeniably moving. A dozen shivering people stood by a Toronto graveside to mourn a beloved friend. Their presence and their wreaths showed they would not lightly forget Ruddy Palmer’s devotion and loyalty. At the minister’s request, they bowed their heads and he prayed: “For your loved companionship, affection and care, loyal and fine, I thank the Lord for this dog of mine — our loss is God’s heaven’s gain.”

A Christian burial for a dog?

The minister was risking abuse at the very least. Those present believed that Ruddy had a soul, and because he had been a good dog, he would go to heaven. However, many people regard such services as a disgusting display of neuroticism and dismiss the claim that dogs have souls as sheer nonsense.

There have been pet cemeteries for years (the one in London’s Hyde Park dates back more than a century) but only recently has controversy arisen over the religious status of pets. In England, a 76-year-old widow threatened to withdraw from the Anglican Church because it was refusing to allow her to continue taking her dog Pip to communion and sharing her wafer and wine with him — something she claimed she had done for years.

In Oak Park, III., Dr. Carl Winter performed a burial service for a blind woman’s seeing-eye dog. Dr. Winter said he would do the same again even though he had come in for some tough criticism.

In Niagara Falls, one resident was outraged at the placing of cross-like markers at the head of animals’ graves at the local Humane Society Pet Haven. He wrote bristling letters to the editor of the local paper, saying the crosses resembled those placed at the graves of soldiers and that their use in a pet cemetery was sacrilegious and an in-

suit to the war dead. He wrote to city council in an attempt to have it order the removal of the crosses. Council, perhaps appreciating the sensitivity of the subject, referred the question to the local ministers’ association, which in turn said it couldn’t make any judgment on the matter.

Churchmen in general equivocate when asked the status of dogs. There is no set policy on funeral services for pets. They stress that when the services occur, which is rarely, they are to assuage the human being’s grief rather than do anything for the dog.

‘‘A funeral for a pet has no religious significance," says Anglican Canon Graham Tucker of Toronto. "We have no information on whether dogs go to heaven — we have to take an agnostic position."

Even far-out ministers, like Toronto’s swinging United Churchman Gene Young, who think nothing of questioning the existence of God, are evasive about pets. When asked whether he would perform a service for a parishioner's pet, Young said: “No comment.”

Others are not so reluctant to talk. Tom Hughes, general manager of the Ontario Humane Society, describes funeral services for pets as a “sickly thing, nauseating — you can take it that a slightly unhappy person is involved.” He believes that a painless death followed by a decent disposal is all that’s required. “You have the memory of the pet, that’s the important thing,” he says.

There’s one other twist in the disposal of dead pets for those who aren’t satisfied with cremations and burials. Each year, about two dozen Torontonians go to their friendly taxidermist. Depending on his size, it costs $125$400 to have old Fido grinning down at you from the mantelpiece forever. 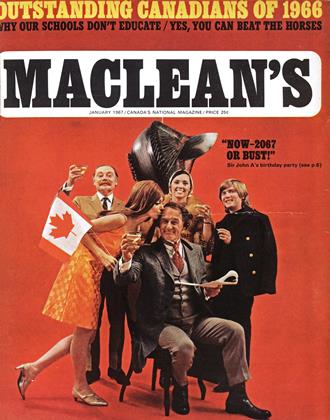