HATS OFF TO Ralph Cowan (Can Ralph Cowan Defeat the French Single-handed?). As a WASP who was born and raised in Quebec, I agree with Cowan 100 percent on the problems of French Canada. If he ever becomes prime minister there will be a lot of Canadian WASPs returning to Canada to back him.

* 1 am sure the day is not far away when Canada will have its absolute freedom from this type of monarchist. We have had too much already.

T Thank God, and all our lucky stars, we have a man like Ralph Cowan. To find one man who has the guts to defend the English in Canada is indeed most refreshing. The present government is yielding to the French all down the line. They should give Quebec full independence; then the rest of Canada could unite and be strong and make Ralph the prime minister.

T While not subscribing to the wild opinions of Ralph Cowan. I grow weary of the term WASP and those who use it. The great historian Namier once attended a gathering where the son of a millionaire of Jewish extraction denied being a Jew. Namier, who was a Jew. addressed him in furious tones; "As you aren't a Jew. let me explain to you something about my people. Like all nations we have patricians and plebeians. The plebeians are ashamed of their origin.”—JOHN M. MCEWAN. ASSOCIATE PROFESSOR. DEPT. OF HISTORY. BROCK UNIVERSITY, ST. CATHARINES, ONT.

H; How refreshing to hear of an MP who isn’t a yes-man! At some points writer Alan Edmonds sounds a little petty concerning Cowan's likes and dislikes — maybe Cowan has a bias against reporters, but after 36 years in the newspaper business he possibly has a right to be so BIASED.-MR. & MRS. TOWNSON,

T We don't worry in Quebec about Cowan's hate — or any Englishman’s, for that matter. We only hate harder.

T Cowan is quoted as saying to French Canadians, "It's time you all accepted the English conquest of 1763. just as the English accepted conquest by William the Conqueror.” True, the Saxons were dominated by the Normans for almost four centuries. During this period, England was involved in French and Continental affairs, with the result that English national consciousness scarcely existed. It was only after dynastic ties were severed with the Continent that a fusion of Saxon and Norman cultures developed. The most important lesson we Canadians can learn from English history is that English-speaking Canada must cut loose from the rest of the English-speaking world, just as the

French Canadians have been isolated from their motherland. French and English here can likewise fuse into Canadians as the Saxons and Normans fused into a new NATIONALITY.-MARVIN A. PARK,

T Bully for Ralph Cowan! He is probably respected more by the French Canadians than these pussyfooting individuals who are afraid to tell the truth and are always trying to butter them up. The deal the French Canadians got was much more generous than they would have given the English if the shoe had been on the other foot, and also more generous than they were getting from their own mother country, which was bleeding them white with corrupt officials. If the French Canadians missed the boat financially for many years, it was not the fault of the English Canadians. but their own educational system, dictated by their church.

It may interest Jon Ruddy, author of The Meeting Game, to know that here at the Lakehead we have several lounges where “decent girls" can go for a drink and enjoy good musical entertainment without ruining their reputations. What makes men think that all unattached girls can't enjoy an evening without chasing them? Pure conceit!

A word on words

Just to set the record straight re the article on singing-commercials composer Bob Hahn (The Hummable Favorites Boh Hahn Writes, Reviews): I wrote the Wherever You Go, Trust Texaco jingle. Hahn subsequently set It to music.

In Stratford's Midsummer Rites Wrong Our Theatre (Reviews) Peter Gzowski writes that theatre in English-speaking Canada is “moribund.” He adds. “In the smaller centres . . . Edmonton, Calgary. Halifax, Charlottetown. Ottawa . . . the story is, with rare exceptions, one of struggle. And of struggle to do what? To present carbon copies of four-yearold plays from London, or two-year-old semi-successes from New York. There is. in other words, no Canadian theatre at all.” Gzowski seems unaware that the Charlottetown Festival is not only successful but entirely Canadian in its content. Since 1964 it has launched nine productions of Canadian plays and musicals, commissioned symphonic works and introduced performers in a wide variety of fields. I am getting tired of commentators who denigrate the scene by the simple expedient of ignoring what is actually going on. — MAVOR MOORE.

T Such articles are most detrimental to Canadian theatre. They undermine public opinion and inhibit the receptive approach. Let's take the positive ap-

proach, encourage theatre by preserving with appreciation what we’ve got. We’ve got a good thing going at Stratford. Let’s not blast it off the map with fiery words. DORELL SPRATT, ETOBICOKE, ONT.

* I’m afraid that it is reviews like this, criticisms that run to a lot of hot air without saying anything, that will eventually drive the last vestiges of Canadian theatre into the ground. All that is needed is someone like Gzowski in Winnipeg and Halifax to advise everybody that they are unintellectual slobs. Then he can write that two more theatres have cashed in their chips. A play does not have to be Canadian-written, Canadian-directed, Canadian-acted, and presented in such a manner that pseudo-intellectuals will politely applaud while the majority of the theatre-going public yawns, in order to be Canadian theatre.

My compliments to writer Jon Ruddy and everyone connected with the article The Secret World of Kiddie-Cult, which was not only well-written but well-researched. I learned plenty. — MELVIN

Quebec: no merge, no mix

When speaking of the spirit of the people of Quebec (The Long Happy Life of Lester Pearson), the prime minister might have said that the French in Quebec most certainly do know where they are going — politically; that they have everything to gain and nothing to lose in this blown-up combustion of discontented feelings that have been smoldering for the past 200 years in a minority group; that they chose to sit in narrow, cramped confines and sulk over their forefathers’ defeat, rather than merge and mix and work with the rest of the people to make Canada a great united nation. Alexander Ross’s question contains the phrase “English Canada,” and in Pearson’s answer appears “French Canada.” Here one gets a rather sad, faraway feeling for a forsaken Canada.

In Its Message is: Live!, Jack Batten writes of the “good life” in Vancouver. All I can say is, he can have it! Obviously, Batten hasn’t lived in Vancouver, with its dirt, smog, fog, slums, overcrowding, confusion, and rain, rain, rain. If you are one of the elite few who live the elite life, okay. But what of the thousands of others who live simple workaday lives? As far as I can determine, most are too busy trying to get ahead in the rat race to even notice the life that supposedly is going on. The rest of us westerners are quite content to stay where we are.

* I resent the derogatory remarks made regarding Mayor Tom Campbell. Although I do not totally agree with Campbell's endeavors, he must be given credit for having the welfare of Vancouver at heart and is not afraid to fight for what he thinks is right.

* I was amused by the cover showing Mayor Campbell and five bikini-clad maidens. It was only yesterday that when the Doukhobors in West Kootenay dis-

Vancouver: nice place to visit—and get

robed, political meetings were broken up, strong men took cover, and there was general mayhem. My, how we have matured!

city of comparable size. I expected something more in keeping with the breathtaking beauty of sea and mountain that form a setting for an ideal city. Equally banal are the fashion photos of posturing young women, trying to out -Vogue Vogue. Surely, somewhere in Vancouver there are talented Canadians alive with the spark that motivates an Yves Saint Laurent, a Balenciaga; an architectural

heir to a Saarinen, Le Corbusier, or Wright. The message for Vancouver should read: “Originality: where are

T Your report merely confirms my opinion of Vancouver as the national glamour capital of bourgeois wealth and respectability, where intellectuals are few

and far between, progressive art movements are regarded, if at all, with dismay and hostility, and the hippies represent a pollution of the pure air of conservatism. All in all, a nice place to visit to see how the upper half lives — and then, thankfully, move on.

Women (only) should decide

The subject of birth control and abortion is very much in the news lately. All the periodicals seem to be printing articles about it by various ladies. However, so far as I am concerned the only sensible one yet to appear has been published in the American magazine Grump (May-June No. 12). I think it reflects what most women really think on the subject. It is my business whether I have a baby or not. It’s getting mighty tiresome seeing the subject discussed as if we were cows to be bred, whether we should breed every two years or not, whether the abortion would damage the stock, whether aborting would damage our nerves, at what month life really begins.

It’s just too much. When women discuss the subject of pregnancy among themselves — believe me — these arguments have no relevance at all.

Doesn’t it seem logical that when girls finally become women, with full responsibility for their own lives, they will become more mature, enjoyable and rewarding partners to men? So this subject should be of great interest to men, too, if they want a real partner.

EDITOR’S NOTE: The Grump article, by Jeanne Sakol, says in part: “I am the Forgotten Woman of the Legal Abortion Movement. I am the ordinary woman of child-bearing age and a certain sexual involvement. I work in a big city, travel, read without moving my lips. I consider it strictly my own business whether or not to have a child.

“Being totally responsible for the functions of my body, bank account, tax returns and civic behavior, I feel that I — and every other woman — should have total control over this incredibly personal matter .. .

“A sound Law for Legalized Abortion would be brief and to the point:

“1. A pregnant woman may have her pregnancy terminated at her discretion and will.

“2. No pregnant woman shall be forced to terminate her pregnancy against her religious or ethical beliefs.

“That takes care of everybody.

“Standards of private morality are a matter of private concern. Sexual freedom or restraint are likewise private . . .

“To those who view Legalized Abortion as an imposition on their religious beliefs, the answer is: ‘Do as you must, but do not dictate to me.’ Because I think baseball is dumb does not mean 1 think everyone should be prevented from wasting time watching it, playing it, or talking about it ... ” ★ 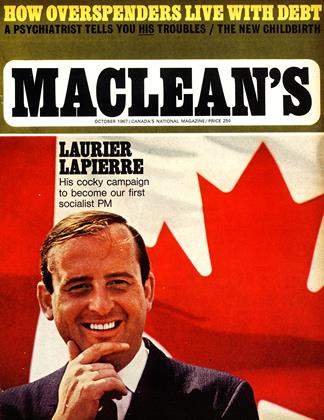