A fond look back at our wacky Centennial year JOAN WEATHERSEED,ALAN EDMONDS December 1 1967

TWO SYMBOLIC Centennial flame-lighting ceremonies took place in Canada last New Year's Eve. One was on Parliament Hill. The other was in Bowsman, Man. The Bowsman affair was probably more significant.

Ottawa held a predictable, ceremonial lighting of the Centennial Flame by Prime Minister Lester Pearson. In Bowsman they burned the privies.

Bowsman’s first sewage system opened in 1966 and on New Year's Eve they staged a bonfire of 33 outhouses. It was 29 below zero, and as the ceremony was about to begin.

2.000 people milled around Bowsman's five streets, dancing to keep warm. Rev. Jim Liles of the United Church murmured a eulogy: “The time has come to bid farewell to old and beloved friends who have held up their ends throughout the years." Then Cliff Nowlan. policeman and sewage-plant operator, lit the bonfire.

It wasn’t the sort of ceremony that could have been suggested or arranged from Ottawa. John Fisher, who chaired the federal Centennial Commission. says, “We had arranged the formal events, the financing and other predictable things. But for a long time we were anxious."

Then Bowsman burned its backyard biffies. “It was the first extroverted. un-Canadian, fun thing to happen." says Jack Struthers. of the commission staff. “That was the first evidence that it wasn't to be a polite, government-run party."

It wasn't the last.

St. Paul, Alta., bucking for the title Centennial Centre of the Year, made it clear it really was building a

$12,000 landing pad for flying-saucers as one of 100 Centennial projects (it has doubled as a bandstand since). The other 99 projects included a goat auction midway through a cattle sale. Benevolent buyers kept giving back the two goats for re-auction, and so they were sold 17 times for a total of $200. The only dissatisfied customer was the man finally stuck with the goats.

The Centennial train opened in Victoria. BC. on January 9 and by November had reached New Brunswick and had clocked 2.407.873 visitors. Another seven million had inspected the Centennial Caravans — eight convoys of trucks touring communities not served by trains.

Bandleader-composer Bobby Gimby’s song Canada proved the most successful record in Canadian history (300.000 discs by the year’s end), and Gimby traveled across Canada four times on personal appearances. He wore out four pairs of shoes leading parades of children singing the song, and was awarded a gold record, jointly by the Centennial Commission and the recording company.

Sometimes it seemed everyone had a Centennial project. A Moncton scoutmaster carved a totem pole: two Calgary men hooked a 14-by-20-foot rug; the Junior Chamber of Commerce in Etobicoke. Ont., built a

Jack McIntyre, who manages a Montreal cemetery, had a new U.S.grown species of rose christened the Centennial Rose. He set up a charitable foundation which had, by November. drawn over $100.000 in royalties from the use of the name ($l'/2 million worth of British-made Centennial Rose bone china was sold).

Canadians explored their land in improbable ways. Hank Gallant. 24. walked from Victoria to Newfoundland. singing his own songs on the way. In Ottawa, police wouldn't let him strum his guitar in Sparks Street. Logger Filip Moen took 131 days to walk the other way — from Halifax to Vancouver. With him walked his five-year-old German Shepherd. Bruno, wearing felt shoes. Others crossed Canada on horseback, roller skates, by canoe, even in balloons. Bill Hardman of Abbotsford. BC. made 100 consecutive free-fall parachute jumps in record time, taking

occasional 20-minute coffee breaks. Rusty Harrison won the 32-mile race for outboard-powered bathtubs from Nanaimo on Vancouver Island to Fisherman's Cove, West Vancouver. A crippled Torontonian set out for Montreal and Expo in his wheelchair, but gave up at Belleville: his hands were blistered from propelling the chair. Flt.-Lieuts. Ron Uruski and Peter Rowlands, pilots of anti-submarine planes flying from Summerside. PEI. travelled the 1.000-odd miles to Expo on water skis.

You could assemble a city from the Centennial halls and auditoriums and skating rinks and concert chambers and art galleries and museums built across Canada. But Lethbridge. Alta., built a Japanese garden, and in Vernon. BC. they opened a Chinese teahouse. Glace Bay, NS. built a mining museum — in a renovated coal mine which has an undersea shaft for visitors to explore. Sudbury's request for a Centennial grant to build a “municipal administration building" was regarded with suspicion: the building includes a jail “and a Centennial jail isn't exactly the spirit we’d like to create.” said a commission staff member. Toronto, however, built nothing. It was. says one commission organizer, the deadest place in Canada — Centennialwise. that is.

Otherwise. Ontario celebrations were “more zestful” than the celebrations in Quebec, says John Fisher. However, more French Canadians than Ontarians visited the Centennial caravans. “Expo overshadowed everything else in Quebec," Fisher says.

Expo, of course, was fabulous, but many Montrealers were glad to see it end: one columnist ran a competition to see who had put up the most outof-town friends and named Fernand Huneaults as winner. By mid-October Huneaults and his wife had accommodated 147 non-paying guests. Montreal’s Marriage Counseling Centre reported the busiest summer ever; instead of leaving town on holidays Montrealers stayed for Expo and to entertain guests, and the cost in cash and nervous stress led to a startling number of marriage break-ups.

From it all emerged one fact: Canada not only enjoyed its birthday

As Jim Liles, who helped burn Bowsman’s privies, said: “Something intangible happened. All sorts of barriers between people—social, religious and so on — seemed to break down when people started working on our Centennial projects.”

As he packed to leave Ottawa and his job as Mr. Centennial, John Fisher said: “I think it was a fantastic year that changed Canada. People are more sure of themselves now: four years ago you wouldn’t have found anybody roller-skating across Canada, or doing any of the zany things people did.

“I think Canadians suddenly realized the land they live in is something to brag about. 1 even think that eternal search for the Canadian Identity is over. I don’t know what it is yet, but 1 think we found it this year.” 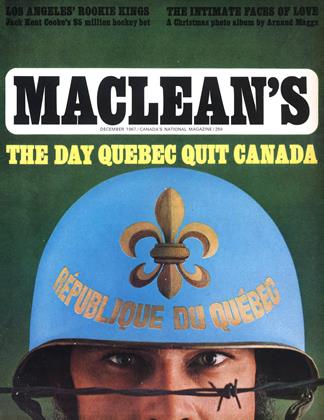