I GREATLY ENJOYED Ian Adams's Montreal| — The Feel Of The Place. That man Adams, he does write well. Mais moi je ne sais pas d’accord sur tout ce qu'il écrit des Canadiennes-françaises. He speaks of "those fantastic, jaunty, evocative, frivolous and suddenly darkly serious French girls." I would like to add we arc still a little more than all of that. We are the heart of Quebec; we have made Quebec what it is. And. we could have done better had we had more support. We are the last stronghold of women on this continent (and others) whose work and constant vigilance, sociologically and materially. has gone unrecognized. Notts avons travaillé et continuons ét le faire dans t'ombre. Not only have we mothered more children than our Fnglish counterparts. but we have worked very hard to make ends meet when our fathers and husbands earned much less than the national average. Our men were not so adventurous. They were not constant in very much, except perhaps in making love. We literally supported and developed a whole community of Frenchspeaking Canadians. And all the time we had no rights, either provincially, municipally or at the church level. Adams has not unduly given much credit to “le Québécois'' — c'est juste. But let it be enumerated who the Joans of Arc of this province were and still are. - MRS. SUZANNE C. BARRON, BAIE D’URFE, QUE.

Re Ian Adams’s special report on Montreal: It makes no sense to try and compare Montreal with Paris, past or present, in spite of Mayor Drapeau’s all-out effort to bring things “Parisian” into Montreal. Adams says Pernod is “a Montreal drink.” It is not, and never was. Montreal’s most popular drink is the very un-French, lowly beer. I presume the Pernod mentioned is of the absinthe variety popular in Paris until it was banned a few years ago, as it has been banned here for many decades. E. FAIR, MONTREAL

Ian Adams replies: “Reader Fair presumes wrongly. The Pernod is not ‘of the absinthe variety.’ It may be bought for $8.40 the bottle in any QLBC store, and ordered by the drink in any bar. Some 30,000 bottles a year are sold in Montreal.’’

Bless you for Powell Smily’s Blackmail. It held an important message: the hell you go through trying to conceal a mistake is a million times worse than the momentary disapproval caused by its disclosure. Tell it, and the reaction is usually, “So what else is new?”

In Nicholas Monsarrat: His Thoughts

anti-Mr. Diefenbaker. I think he’s a bloody-minded old brute . . . he’s absolutely wild for power . . .” Later he declares, “If you can’t say something nice to a person or about a person, then for God’s sake don’t say anything”!

Hal Tennant tosses off a pretty flippant article on Canada’s defenses under the head O Canada! Who Stands On Guard For Thee? (Reports). He reassures us with a quotation from an anonymous "high-ranking Defense Department spokesman,” which can only be described as humbug. If the strengths of the services cited are intended to be conclusive and reassuring, I suggest the spokesman should immediately be seconded to the Americans fighting in Vietnam where this modern alchemy with numbers could be put to effective and instant use.—p. F. RAMSAY, BRIGADIER (RETIRED), VICTORIA

A Surprising Second Look At Those “Facts" About Cancer And Smoking, by C. Harcourt Kitchin, should not go unanswered. The following points should be made: (1) Dr. Bradford Hill, co-

author of the first, massive controlled study published in the British Medical Journal in 1952. was indeed a statistician and an eminent one at that, being both a Professor of Statistics and a Director of the Statistical Research Unit of the Medical Research Council. (2) Figures comparing cigarette consumption in a country with the incidence of lung cancer are meaningless figures. Only controlled studies matching smokers and nonsmokers for age, sex, depth of inhalation, duration of smoking, age at onset of smoking and pertinent variables, are valid since these factors do play a significant role in establishing the validity of statistical evaluation. This technique was scrupulously carried out in the aforementioned study. (3) The important point is that cigarette smoking has been proved beyond doubt to be an important related factor in the cause of lung cancer. (4) More important still is the role of cigarette smoking in emphysema and heart disease. Emphysema, an insidious but lethal chest disease, eventualy results in irreversible heart disease, a fact not often stressed. — MICHAEL G. SANDERS. MD.

The Commonwealth: we need it / Mirror, mirror—tell ’em!

What on earth is meant by the invitation (Editorial) to Forget Hitler And Remember Hegel? Hegel, with his glorification of ihe state and the “heroes” who are to lead it, and his concept of war as the great purifier, laid the philosophical groundwork for the totalitarian movements of the 20th century. Why remember him but forget his fiendish offspring? Perhaps we should remember both!

Can we walk alone?

Unwittingly, 1 think, two articles by Alan Edmonds in the same issue — Is This The Winter Of Our Discontent? ( Reports) and England Sw ings? — lend support to a line of reasoning l do not admire: that since the British are poorer and less influential than they used to be, we should further dissociate from them. The Commonwealth link may be in a very precarious condition for Canada, but tenuous as it may be, the Commonwealth idea is bound up with the persistence of Canada as a unit.

* We kid ourselves badly if we imagine Canada can walk alone in the present disturbed state of international affairs. We are proud to be Canadians, but is our place in the Commonwealth to be ignored, just to seek the French-Canadian vote?

Simon Fraser University opened its doors little more than a year ago and has already mounted several courses of graduate study. One of our problems is in obtaining yearly bound or unbound back issues of Canadian periodicals such as Maclean’s-, our intention is to acquire back files to 1945, if possible. We would be pleased to hear from Maclean’s readers who may have back volumes either to donate or for sale. Please reply to: Mr. C. MacDonald.

Barbara Klich’s Argument (Boycotts Are Hysterical. Don't Blame The Supermarkets Just Because You Can't Jell A Bargain From A Bandsaw ) left me both appalled and infuriated. She begins by throwing a series of irrelevancies at the reader (a tirade against foolish budgeting and sloppy shopping), and then tells us to stop complaining about the high cost of instant rice, which nobody was complaining about anyway. We want to know why staple foods cost so much. Mrs. Klich seems to think it is perfectly all right for food shopping to degenerate into a battle of wits between the consumer and the food industry. But the average housewife is pitted against armies of motivational psychologists and ad men whose education and experience have been devoted solely to learning more and better ways to fool her. Hardly a fair fight.

Pretty girls, where are you?

Re your cover on which four girls are modeling dresses by Susie Kosovic (The Susie Thing): A few years ago, women, generally speaking, tried to wear things that enhanced their good looks. Not now: they wear anything that makes them look different from the older generation. Their hair is worn so that they look like Skye terriers. Your cover shows their eyes like holes in their heads. Of course, you cannot tell a young woman anything, but 1 would have thought their impartial mirrors might have given them some sort of a clue. Why do they wish to make themselves look ugly? 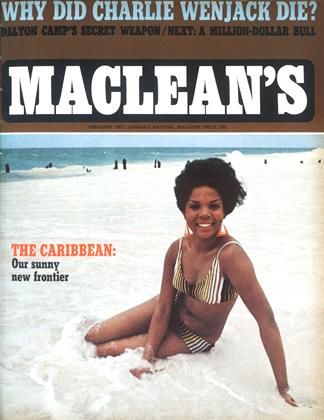