THE BIG pseudo-event of my childhood was the Royal Visit of 1939. On that occasion someone gave me an orange-and-white Irish-linen tablecloth, fantastically printed with a border of maple leaves, the crests of the United States and England, and in the corners, the Union Jack and Stars and Stripes crossed, with the words “CANADA-USA 1939.” I’m thinking of hanging it on my wall, to look at when Centennial year on television starts to get me

I sometimes wonder what memories today’s children will retain of the big pseudo-event (defined by sociologist Daniel Boorstin as a news event planned in advance) of Canada’s electronic era. On New Year’s Eve ! made a halfhearted attempt to get mine to watch the Centennial flame-lighting while I dressed, but they got bored with watching and switched over to Jackie Gleason soon after that puzzling moment when the choir sang God Save The Queen in French. Not tuned in as yet to the importance of Canadian occasions, they missed the heart-warming sight of Judy LaMarsh bundled up in her fur coat, the breathless moment when it looked as If Pearson wouldn’t be able to get the Centennial flame going, and the fireworks bursting over the Peace Tower.

Nor were they around the next night as I dutifully watched The Canadian History Test, a damp squib indeed; about ail I can remember of this one is June Callwood at Louisbourg; June Callwood on the Plains of Abraham; and June Caliwood shivering beside the grave of Louis Riel. June, obviously, has already celebrated Centennial year, but the trouble is just beginning for Judy LaMarsh and Norman DePoe. As this stalwart pair trudge up and down the country this Centennial year, opening things and covering the opening of things, our hearts go out to them.

"I’m sort of a figurehead,” Miss LaMarsh explained in a Sunday interview. I think she makes a good one. In her interviews and public appearances she always gives the impression of being herself; she has less facade than almost anyone else in Canadian public life. I liked her, for instance, when she

was explaining to Donald Gordon on Twenty Million Questions how hard it was to find a president for the CBC, especially when you didn’t know many people in cultural circles. It’s pretty unusual, after all, for a politician to admit to being even slightly out of touch with anything.

The CBC’s gravel-voiced DePoe, though he reports straightforwardly enough, brings his own indisputably raffish air to Centennial occasions like the opening of the Confederation train, making them not totally unbearable.

i wish Centennial year (and television) had come 20 years ago, when I was still a rabid Canadian nationalist (subconscious reaction, perhaps, to that Royal Visit). Then I would really have enjoyed seeing the CBC resurrect the bad men of British Columbia’s past (yes, we had bad men too) with Ian Tyson standing on the railway platform from which a great train robbery was committed. I would have been a lot more pleased by the information from the show Änd Then We Wrote . . . that the Darktown Strutters’ Bali was written in Canada, and that the author of

0 Canada died in the United States, cailing himself an American at heart.

1 would have been more amused by the song featured in the show:

From every tree top, roof and window-sill.

i might even have enjoyed The Mystery Maker, a children’s adventure series about a boarding house in Stratford, Ont., and a girl who wants to piay Madeleine de Verchères in the Centennial pageant.

Now, I must confess, my heart sinks as I look through the Special Centennial Issue of the CBC Times, and I suddenly understand why the producers of Take Thirty decided to make their Centennial project a trip to Africa.

Whatever their motives, they came up with an impressive series of nine halfhours on The New Africans, being shown on Friday afternoons through March 10. The February 24 program, The French-English Question is of special interest to Canadians. It shows black Africans trying to deal with language problems that are in many ways similar to our own, and like our own, inherited from colonialism. 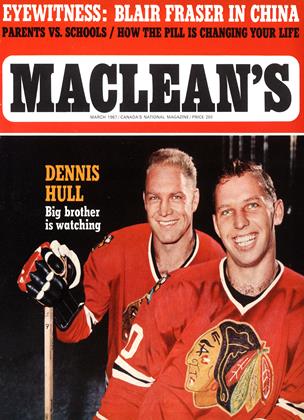