IT'S A LITTLE after 5 p.m. in the Four Seasons bar just across the street from CBC headquarters in Toronto. The bar is a warm, dark and softly padded place. There are lots of those cozy womb-like swivel chairs without which no television personality feels really secure. This is the second home for the writers, producers, announcers and researchers who run CBC-TV’s news and public-affairs departments. Here is where many of them come to plot coups, argue policies or nurse hangovers. Others come simply to unwind or wind up.

Stanley Burke, veteran journalist and chief announcer for the CBC National News, is winding up with a preliminary beer. He’s only just got dressed and has a hard day’s night ahead of him. At 7:30 he must give a still-unwritten speech to a journalism fraternity, by 9:30 he must be hack in the newsroom and at 11 p.m. precisely he’ll turn his creased, handsome face towards a camera and say “Good Evening” to about two million Canadians.

Overflowing from another chair is Larry Zolf, compulsive gag-man and co-host of the CBC’s prestige public affairs show Sunday. Zolf is sipping gin and recuperating from a packed week that involved a show in Vancouver, a flying visit to Winnipeg and a guest appearance on Nightcap. “Your face is beginning to look

familiar.” jokes a photographer. “Just remember to take my picture with a wide-angle lens,” says Zolf.

Familiar faces are about the only things Burke and Zolf have in common. This season they both emerged as major television personalities. Fans now stop them in the street, bartenders are happy to cash their cheques and even in the talent-laden atmosphere of the Four Seasons, colleagues gravitate towards their tables. Both men have “arrived” — but they came via opposite paths from totally different worlds. Their only common 'denominator is the CBC.

Burke is a suave, world-traveled, confident and serious-minded — the perfect picture of the well-bred WASP except for his religion. (He is nominally a Roman Catholic but “the last time I went to mass was when I was covering the Vatican Council.”) Zolf. in contrast, is a lumbering gadfly who regards all Canada as a backside worthy of his sting. He is bear-like, insecure, a caricature of Jewishness and a sworn foe of all that is pompous and high-minded. “I prefer humor.” he says, “even above sex.” Their biographies read like textbook cases of social antithesis:

"■* Burke. 44, born into an uppercrust Vancouver family; attended private schools, graduated in agriculture from UBC, served on small ships in the RCN during World War

11 and failed as a post-war turkey farmer (“Burke’s Tender Turks”) in Chilliwack, BC; then worked for a variety of western newspapers, joined the CBC as UN correspondent in 1958 and has been based mainly in Paris since 1962. Married, four children.

Zolf, 32. born into an immigrant family of Polish Jews in north Winnipeg (“I was the first Polish joke in the neighborhood”) ; influenced strongly by his late father (a great teacher, a devout socialist and a sentimental monarchist); an above-average student, his education culminated in an almost-MA in history from the University of Toronto (he passed his exams but his unfinished thesis on Ontario Premier Mitch Hepburn and the Hungry Thirties is still a standing joke); lived as an itinerant scholar, mainly off his wit and his wife, until he was discovered lurking in Yorkville by producer Douglas Letterman. Married to an Anglo-Saxon, one child.

Neither Burke nor Zolf, of course, was a total stranger to the limelight before this season. Among other things, Burke was previously famous for (a) wearing sky-blue Bermuda shorts in the Ottawa press gallery, (b) inadvertently swearing on air in 1961 (“Christ Almighty”) and (c) becoming extremely unpopular with the Cypriot government after some misunderstanding over purloined art treasures.

Zolf’s highpoints include (a) a prize-winning documentary film on the Toronto newspaper strike, (b) getting whacked by Pierre Sévigny’s cane and (c) being implicated in but somehow surviving lasJ season’s Seven Days debacle.

This season Zolf began as just one of three hosts on Sunday. Now he’s the dominant force — and with good reason. It is mainly his deadpan putdowns and easy-going interviews that have prevented Sunday from falling into the Seven Days trap of taking itself too seriously. When Zolf asks a bewildered London cockney why Lester Pearson wasn’t Time's Man of the Year he seems to be singlehandedly keeping alive the rumor that we do have a national sense of humor. There is no other genuine standup satirist on national television. It’s a heavy burden for one man to carry —especially since he carries it mainly on his nose.

Burke’s burden is more serious. As Earl Cameron’s replacement, he’s supposed to be the symbol of a new format designed to make TV news more lively, more immediate and more comprehensive. The format, however, is falling apart because of a running feud between unions in the newsroom. Burke is caught in the middle. Although he is one of the best newsmen in the business, union regulations forbid him writing or editing a single word of the copy he reads on the air.

“The original idea was to make me like the CBS’s Walter Cronkite — both an editor and an announcer. The union squabble has wrecked that.

I’ve had to hire a lawyer to figure out what my rights in the matter are.”

Burke is confident the union situation will improve and with it his reading ability. These days he rarely gets through a newscast without saying something like “the Queen of the Bletherlands" or “death or more serious injury.” He makes these slips, he says, because he can't edit his copy. In spite of the gaffes, his fan mail is improving. Women like him, “He has that lovely debauched look,” says one admirer.

Zolf. who dismisses the newsroom as “the shrine of the voodoo cult,” also gets the odd fan letter. “I had one just the other day from an old Winnipeg friend. He called me a Jewish Uncle Tom.” Success and expenseaccount living are beginning to get to Zolf. He still lives in a rented house in a near-slum but he loves taking planes, rides everywhere in taxis and always stays in the best hotels.

Friends have long assured him that he’s capable of hosting an hour-long interview show of his own —and he is at: last beginning to believe them. His barrages of gags no longer seem to he merely defense mechanisms. Television has made him less vulnerable, although he still likes people to like him.

“I used to be out to get people before they got me. I’ve grown up a lot. My paranoia these days is to keep people laughing. All my best friends are laughers. Anyone without a sense of humor is a maniac by definition. Perhaps it’s a Jewish occupation, the desire to laugh in a tragic world.”

He just got an idea for a new TV quiz show starring Burke, Pierre Berton, Patrick Watson and Elwood Glover. “The panel will be shown pictures of famous people minus their noses. They have to guess who the people are. The show will be called Pick Your Nose." 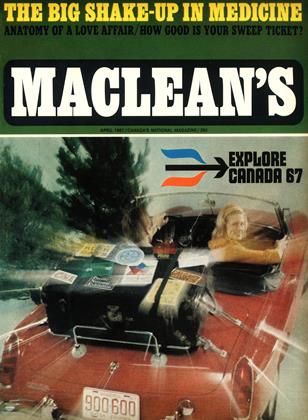