DON’T SELL THE television set yet, but an exhilarating spirit of adventure seems to be sweeping through the previously calm, cautious, uncommitted world of Canadian publishing. The publishers are shedding many of their eccentric 19th-century attitudes and groping for a new image. One or two have already found it. And found, moreover, that it pays.

The result is that more Canadian books are being published than ever before, even discounting the Centennial splurge of nonbooks. “It’s safe to say we’ve increased production of new titles by 35 percent in the last five years,” says Dereck Lewis, editor of the publishing magazine Quill and Quire. “Exact figures are unavailable because the publishers have an almost pathological fear about revealing statistics. But in 1966 the houses turned out an estimated 1,800 purely Canadian first editions—about one quarter of them in French. Not a bad total for a country this size.”

Lewis says, and most publishers agree, that it is now easier for a promising Canadian writer to get published than at any time in the past: “Nobody’s waiting for the great Canadian novel any more. It will either happen or it won't happen. Meanwhile the climate is very good, very exciting.”

Things haven’t been so exciting, in fact, since the early 1920s. Those preradio days were the golden age of Canadian publishing. A new book by Lucy Maud Montgomery or Stephen Leacock would have a first printing of 50,000 copies — five times what would be considered a best - seller today.

Then came the Depression, the war and television. Publishers pulled in their horns and were content to graze in the safe, lucrative fields of textbooks and specialized subjects. Even now only about 200 of the 1,800 new titles published each year are trade books — “trade” being a wide-ranging term publishers use to describe fiction, biography, travel books, anything that isn’t for PhD students and might conceivably interest the general public.

The turning point came in 1963 with the remarkable success of Peter C. Newman’s Renegade in Power. Before then only a handful of established

Canadian authors had been able to survive on the Canadian market. Inspired perhaps by a resurgence of interest in things Canadian, a new breed of writers began producing a series of high-quality books that were neither parochial nor self-conscious. They proved that Canadian trade books could compete on an equal basis with the American and British titles that dominate (98 percent) the Canadian market.

Not only did the books sell well at home, they awakened interest abroad. Today, thanks to the good international connections established by most publishers as an economic necessity, even a mildly promising first novel is virtually assured of later publication in London or New York or both. And one of the largest New York literary agents recently considered it worth his while to open up a Toronto branch to woo Canadian writing talent.

A good example of this new trend is How to Make a Million by Toronto’s controversial ex-coroner Morton Shulman. Ten years ago such a book would probably have sold a couple of thousand copies in Toronto and died on the bookstalls everywhere else. But Million has already sold 32,000 copies in Canada alone (most of them before Shulman was fired) and it is likely to do three or four times that well in the U. S. Says McGraw-Hill’s Marnie Collins, who edited the book: “Even I can’t understand why Americans should be interested in how a little-known Canadian made a killing on the Toronto Stock

Exchange. But they’re buying it like mad down there.”

Jack McClelland of McClelland and Stewart credits the writers with creating the boom. “More Canadian books are being published simply because better writers arc producing better material,” he says. “Five years ago we were scrambling for good manuscripts. We're not scrambling anymore and I don’t think it’s because we've changed our basic approach.”

McClelland is too modest. He virtually engineered Canadian publishing’s mad rush into the 20th century. His vigor, flair for publicity and willingness to take risks had his rivals first reaching shakily for double sherries and then striving to follow his example. McClelland is now the Canadian publisher and enjoys first refusal on most important manuscripts.

Just one of the new approaches McClelland has sponsored is a dramatic experiment in direct selling. Last year, in partnership with Pierre Berton and Weekend magazine, he produced the eight-volume Canadian Centennial Library series for some 75,000 mailorder subscribers. The experiment was so successful (a total of at least 600,000 copies sold) that another eight books in the series (renamed the Canadian Illustrated Library and minus the Weekend connection) will start appearing this summer and more may follow.

McClelland expects the direct-mail technique will also ensure the success of his projected Preview Book Society — a deal whereby a theoretically elite list of subscribers gets an advance peek at the rough proofs of new books. Direct sales have opened up brave new publishing worlds in Canada and the only people unhappy about it are bookstore owners and other publishers.

But for all his drive and imagination, McClelland still shows traces of the old-fashioned arrogance that for years made Canadian publishing more of a snobbish family compact than a true profession. Recently, for instance, an upstart rival publisher wrote suggesting that McClelland, who seemed to have every other major author tied up, might himself be interested in writing his biography. Jack was neither interested nor amused. Twice in the last two years McClelland has lost first rights to best-sellers because he insulted or quarreled with the authors.

And for a publisher who’s obviously prospering, McClelland can still be incredibly tight with his money. All aspiring young writers should heed the experiences of one Toronto author who submitted his first novel to McClelland and Stewart. Back came the news that the writer could have an advance if he agreed to make major revisions. How much of an advance? “Oh, we might be able to make it $50,” said the McClelland editor. “I don’t suppose,” said the author icily, “that you happen to have it on you.”

That author eventually placed his novel elsewhere. One house he didn’t bother trying was Clarke Irwin, an ultra-cautious and tightly controlled family concern that forbids its em-

ployees to smoke and is notorious for its dry cocktail parties. But even Clarke Irwin has felt the spirit of adventure and last April hired magazine journalist Jim Purdie to revamp its image. (Purdie, a two-pack-a-day man, spent most of the first month vainly trying to break the smoking taboo.) One new-image development: the firm will soon issue a Canadian series of the famed Jackdaw history kits (reproductions of documents and relics) for students.

The other major trade-book publishers in Canada are at various intermediate stages of image evolution. The most advanced is Ryerson, which has recently revitalized its policy and expanded beyond its purely religious and educational origins. It’s now the main haven for Canada's poets. Macmillan of Canada under John Gray remains conservatively British but has some of Canada’s brightest up-andcoming talent on its editorial board. Doubleday, a U.S. offshoot, and Longmans Green, an Anglo-American hybrid, have both begun shelling out some of their distribution profits to Canadian authors as if they really meant it.

Publishers counter most of the criticism thrown at them with hard economic facts. Fiction, they say, is currently a drug on the market everywhere. “We only buy fiction for prestige, as an investment in the writer or out of a sense of duty,” says McClelland. Other trade books do better but only sensational best-sellers can recover production costs on the Canadian market alone. Textbooks remain the meat and potatoes of publishing in Canada. The publishing boom exists, sure enough, but it’s still on shaky ground. It is certainly not the sort of boom that should encourage anyone to start churning out epic romances or ransack the attic for longdiscarded manuscripts. 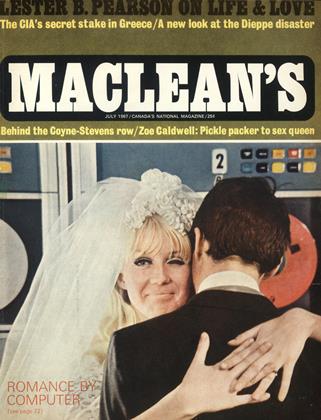