IN The Merry Wives of Windsor, one of the first three offerings on the menu of the Stratford Festival’s 15th season, Tony van Bridge plays an aging but scarcely daunted Falstaff. He is fat as a rhinoceros and wears a codpiece as big as a summer squash. At one point in the complex plot he finds himself trysting simultaneously with both wives of the title — Frances Hyland and Zoe Caldwell (whom I’m afraid I couldn't help thinking of as Franny and Zooey). Falstaff looks at one. He looks at the other. Then, with exquisite timing he says . . .

Now on Occasional Wife, I’d say, that wouldn’t be a bad line. Or if someone happened to say it at a party a few of the guests might be amused. But at Stratford, at least on the night I saw The Merry Wives, it broke everybody up. Biggest laugh of the evening. Applause, even.

And there, surely, is the hallmark of what has gone wrong with the original brilliance of Stratford. What the audience was laughing at was not what was said but how it was brought off. The whole festival has become not so much a season of theatre as a ritual, the rites of Canadian spring

and summer. It is a triumph of style over content.

This is not to say the style is not well handled. It is. In 15 years under Tyrone Guthrie and Michael Langham the company has become a well-tuned instrument, and already it is evident that the men who’ll take over from Langham next year have learned how to play it.

Furthermore, the style is unique. The manner that a revue-writer of the early 1960s parodied as The Stratford Strut is, at least, something of our own: The quickly-spoken midAtlantic dialogue; the grandiloquent gestures; the overwhelming spectacles on the jutting stage — something more choreographed than directed.

For the actors, I would guess, all this is a romp. No wonder that year after year the festival is able to attract international stars it could obviously not hire for money. (This year: Alan Bates.) Pull out the stops! Indulge yourself! Show us that technique, man! Is the character old? At Stratford he shows it by gumming away like a hungry goldfish. Noble? He thrusts his pelvis forward. Shy? He stammers. (In demonstrating shyness, I doubt the Stratford company has

But for the audience . . . well, the thing is here we are talking about the Stratford audience, people who have driven long miles to enjoy themselves, and by the Bard they are going to enjoy themselves whether they like it or not.

And what a pity! All that style rattling around in so many hollow vehicles. Take this year’s first three entries. By far the most successful, with critics and audiences alike, is the only non-Shakespearean play, Gogol’s The Government Inspector. In prerevolutionary Russia, I imagine, its satire of bureaucratic jiggery-pokery must have had a stinging impact. Today . . . well I liked the movie adaptation of the 1940s better, although William Hutt almost managed to ham up the role of the “inspector” as much as Danny Kaye. The Merry Wives is an overly long (three hours) study of a not-very-interesting old man. As for Richard III: I congratulate anyone who can last longer than the first act, which, even if Alan Bates were not playing one of Shakespeare’s most evil characters like something out of Georgy Girl, would still, I’m sure, sound like a dramatized genealogical table.

According to most of the advance word, Antony and Cleopatra, the season’s fourth entry, will also be its strongest. (For myself. I’d go to see Zoe Caldwell in anything.) But even it, surely, will be more of the same. What Stratford is teaching all those people who take the pleasant drive through western Ontario each summer ... all those dragooned husbands and vacationing schoolteachers . . . what Stratford is convincing them is that the theatre is just technique, that it has nothing at all to say to them that matters.

In London and (at least off-Broadway) in New York, the theatre is alive and kicking. In English-speaking Canada it is moribund. The only two significant repertory companies in Toronto have both cashed in their chips in the last year. The biggest houses do their biggest businesses with road-show companies on their way to or from the U.S. (In the week I write, Harry Belafonte is singing at the O’Keefe Centre; the Royal Alexandra is dark.) In the smaller centres . . . Edmonton, Calgary, Halifax, Charlottetown, Ottawa ... the story is, with rare exceptions, one of struggle. And of struggle to do what? To present carbon copies of four-year-old plays from London, or two-year-old semi-successes from New York. There is, in other words, no Canadian theatre at all. (I’ll except the plays presented at this year’s Dominion Drama Festival from that sad judgment when one of them can stage a successful commercial run.) The most stimulating domestic theatrical enterprise in Canada this summer is probably that in Niagara-on-the-Lake, Ont., and even there, at least in the

one example I’ve been able to see this year, there are signs of a Stratfordlike emphasis on style over content. For all of this, I would suggest. Stratford, Canada's noblest theatrical venture yet, must take a large share of the blame. 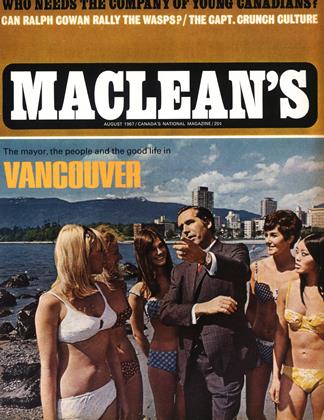