“HE’S A PRO—he’s beautiful.” This phrase alone, a tribute from a younger gun to old hand Lee Marvin, marks Point Blank as a movie made in the year of the flower children. Never before would a compliment from one tough guy to another be worded this way, and probably never again. Odd as it may seem, this violent gangster

thriller is perfectly in tune with much of the hippie view of American society. Walker (Lee Marvin) is a sort of gangster drop-out who gets turned on to himself by tuning in to Angie Dickinson.

It is also one of the three or four best American films of the year.

As in several other of the year's movies (notably The Naked Runner and The Qui Her Memorandum) the story is only a framework of suspense, not what the movie is really all about — a factor which provokes some reviewers to wonder w hy so much good film-making is wasted on so trivial a subject. Walker's search for the best friend (John Vernon) who stole his wife (Sharon Acker) and his share of the loot, is really a parallel to that of Howard Hawks' western pros in El Dorado (though John Wayne would rather fight than be called beautiful). The big difference being that Lee Marvin is not an optimistic frontiersman, but a cool-headed cynic. His American dream is not concerned with idealism and the promise of the land. He's a part of the sinister city landscape, not the wide-open spaces, and he’s after money. What they share is a belief in manly courage and individuality. This Walker keeps through all his disillusioning contact with the fat crime syndicate slugs, who deal in millions but never see cash, and who live as opulent and regular a life as any big corporation executive. But he keeps it only at the price of giving up his quest, the endless debilitating hunt for the big bundle, the golden fleece.

The parable part of the picture is demonstrated by the blessedly silent means of style. Walker is a doer not a talker. His alienation comes out in action, very spectacular action. For revenge, I know of no scene to match the one where Marvin uses Angie Dickinson as bait, and rips Vernon from his bed, just as Vernon thinks he’s got it made. There’s another truly masterful sequence where Angie and Marvin act out the North American war of the sexes. She wears herself out beating her fists against his chest, and when he still stands as solid (and distant) as the rock of Gibraltar, she answers muscle-power with machinepower, turning on every labor-saving device in the place.

Point Blank is a marvellous beginning for John Vernon. With his brilliant blue eyes he could equally well play madman or saint. Either way he’d be magnetic. He dies early in the plot but you don’t forget him.

Altogether, it’s been an outstanding year for Canadian talent, both here and in Hollywood (see page 30). Beside Vernon, there’s Sharon Acker and Lloyd Bochner in Point Blank, Peter Kästner in You’re A Big Boy Now and Genevieve Bujold in La Guerre Est Finie, King Of Hearts and The Thief Of Paris.

Director Norman Jewison followed up the success of The Russians Are Coming with In The Heat Of The Night, and Sidney J. Furie scored, at least critically, with The Naked Runner, the Frank Sinatra spy flic.

For once, Canadian film-makers have also managed to make some impression on Canadians. Allan King’s controversial documentary Warrendale has had good showings in Toronto, Winnipeg and Vancouver, as well as winning awards at international festivals. Don Owen’s CBC-NFB feature The Ernie Game, was both hated and loved (especially by younger viewers) and there were all those films at Expo. Chris Chapman, Roman Kroitor and Graham Ferguson have each received important commissions as a result of the success of their films (Ontario's A Place to Stand, Labyrinth and Polar Life) and Chapman is almost sure to be nominated for an Academy Award. It’s enough to convince me that what a French critic said about Canada is true: Canadian movies are the avant-garde of Hollywood.

It was also the year when the underground movies came — and possibly went. Though their Canadian exposure has been largely at clubs and universities, the underground has still become part of the general movie scene. (They are even documented in

two new books.) Andy Warhol had such a success with The Chelsea Girls that at one time this year he had three different programs on at once in New York — a record for any director under 50. And the underground has shown up as an influence in even the most commercial of films, notably Roger Corman’s LSD picture, The Trip, and the Hell’s Angels series.

Actually, 1967 was a really good year in almost every way. It was not, by me, a year of exceptional violence in movies, just a year of exceptional consciousness of violence, and that’s a very different thing. It was one of those years when people are discovering new directions, and the excitement produces a rash of good pictures.

Besides Point Blank and El Dorado my favorites among those shown in Canada this year were: Bonnie and Clyde (despite Warren Beatty), In The Heat Of The Night (Sidney Poitier included), Antonioni’s BlowUp, You’re A Big Boy Now (a nice application of candid technique to story-telling), Don’t Make Waves (the year’s best comedy), The Taming Of The Shrew (Liz and Dick in rare Shakespearian form), Accident (Joseph Losey’s psychological whodunit), Far From The Madding Crowd (John Schlesinger’s celebration of the British countryside) and the renovated Gone With The Wind.

I wouldn’t have missed, either, Grand Prix (for its spectacular racing sequences), The Dirty Dozen (for the skill of its violence), The Quiller Memorandum (for Harold Pinter’s script), Countess From Hong Kong (no Chaplin film can be all bad), Marat!Sade (a brilliant screen version of a theatrical masterpiece), Two For The Road (an almost-adult look at marriage), The Family Way (an honestly funny look at family life) or Fahrenheit 451 (for Julie Christie, Oskar Werner and Ray Bradbury’s story).

In the loathsome-but-fascinating category I’d place Privilege, Reflections In A Golden Eye, Hurry Sundown and Penthouse. The biggest of the bad and baddest were: Camelot,

On the international scene it was the year when the Yugoslavs took the laurels away from the Czechs who got them from the Poles who inherited them from the Italians. Nevertheless, the latest discovery is a Polish director, Jerzy Skolimowski. The best foreign films we got all came from the old masters: Persona by Ingmar 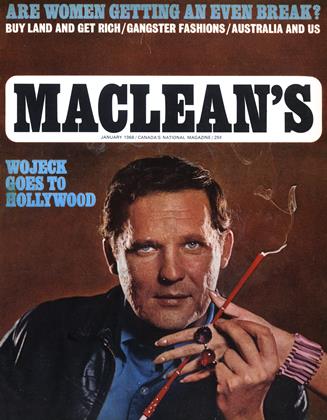