“THIS STUDY DIDN’T come out the way I had anticipated.”

The man speaking is Dr. Lawrence E. Hinkle, Jr., a Cornell University Medical College physician who has just completed a mammoth five-year health survey of 270,000 employees of the Bell Telephone System in the U.S. When Hinkle began his investigation he shared the widely held belief that executives are more vulnerable to coronary heart disease than less highly placed employees.

His survey proved the opposite.

It was the non-management worker who more frequently suffered coronary illnesses and death. And the higher an executive climbed on the industrial ladder, the less likely he was to be affected with heart disorders.

Heart disease, says Hinkle, seems to be directly related to such factors as body build, lack of exercise, smoking, social and educational background.

The Bell System survey supports the claims of certain sociologists that we’ve been wasting too much time worrying about executives. We should be more concerned, they say, with both the mental and physical wellbeing of low-rank civil servants, clerks, retail-store salesmen and factory workers.

Mentally, the executive is in a more robust frame of mind because his job gives him satisfaction. He can be creative, make decisions and follow them through. The men below him are more likely to be stultified by> routine, dead-end jobs.

In physical health, the executive also has an advantage. The betterpaid executive can afford better food, better housing, more recreational diversion and a higher class of medical attention.

Finally, it’s likely that executives have an initial jump on the rest of us. It’s likely that they start life with stronger, more durable physical and mental equipment.

“Sometimes I have visions of God or of Christ.”

“My hands or feet sometimes feel far away.”

“I can taste bitter things like poison in some foods.”

“My sense of touch has become very keen.”

from guesswork to a precise technique.

The new mental-health tool is known as the Hoffer-Osmond Diagnostic test (HOD) and is named after its originators. Dr. Abram Hoffer, formerly research professor in psychiatry at the University of Saskatchewan, is now engaged in research and private practice in Saskatoon. Before assuming his present position of director of the New Jersey Psychiatric Research Institute, Princeton. New Jersey, Dr. Humphry Osmond spent several years with the Saskatchewan Department of Mental Health.

Unlike most other psychological tests, the HOD can be administered easily and scored without the help of psychologists or psychiatrists. It’s the product of Hoffer’s and Osmond’s long experience with psychedelic drugs on themselves and others as well as their detailed observations of mental patients. It is based on the premise that the psychotic’s perceptual and sensory apparatus has become different from that of the normal person.

The HOD test consists of 145 cards, each one containing a true-orfalse statement. The patient is asked to divide them up into true and false piles. Dr. Hoffer explains: “They cover awareness of one’s body, the person’s sense of time, his thinking and his mood. The test also explores his senses of touch, hearing, vision and smell. The mentally ill person turns in many more true answers than the normal person.”

After being tried on 4,000 psychiatric and non-psychiatric subjects in various Canadian and U.S. centres, the test has been found helpful in identifying the patient who is suicidal, homicidal or schizophrenic. It can also pinpoint individuals suffering with an organic or toxic psychoses, including patients who are drunk or having DTs.

The HOD test has already been used by the police in one western Canadian city. A young policeman strongly suspected that a chronic 22year-old thief was mentally ill. On the basis of a high true score on the HOD test, the thief was sent to a psychiatrist who diagnosed him as schizophrenic and began treatment. Now the young man is working and returning to a normal way of life.

Dr. Hoffer comments: “Based on our experience to date, the HOD test shows great promise. We expect to make further refinements on it in the future. The underlying premise of the test — that the patient himself is the best source of information about his condition — appears to be valid.” 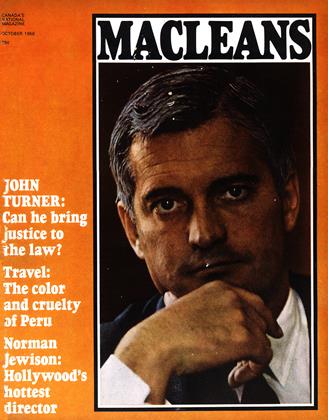