That next great “Japanese” film is all-Canadian November 1 1968

MOST DRAMATIC of all Canadian contributions to Expo 70 will not be in a Canadian pavilion.

The men behind Labyrinth and Polar Life, both big film hits at Expo 67, have formed their own private enterprise which has developed a camera and projection system to fill a screen the size of a 10-story building. A consortium of Japanese companies is paying Graeme Ferguson, Roman Kroitore, Robert Kerr, Colin Low and Donald Brittain a million dollars to make a movie and provide all the equipment for a 20-minute all-embracing show in the Fujii group pavilion.

The pavilion itself is radical. It’s built of air beams: huge inflated inner tubes, sixteen feet wide and 20 stories high. Here Kroitor and cronies will project multi-image movies three times the size of Cinerama by means of film racing sideways through the projector at 337 feet a minute.

“Expo 67,” says Ferguson, “was just a kindergarten for what can be done with film.” 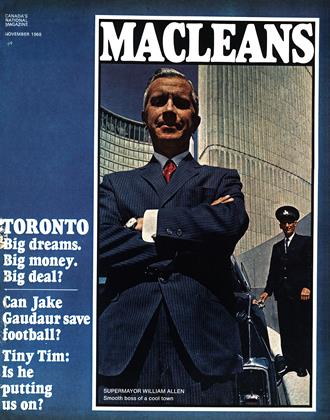