YOUR SPECIAL REPORT, The People Of Canada vs. The Crown, was most interesting — and frightening. When the average citizen is thrust into the judicial process, he finds that his beautiful beliefs about our legal structure have turned into an unbelievable nightmare. The fact that magistrates and police work so closely together contributes to that nightmare. One unsavory condition not mentioned in your articles is the tendency of senior police officers to criticize not only fair and reasonable existing laws, but also legislation before parliament. The police are hired to carry out the laws passed by our elected representatives; they should stick to their sphere and stop trying to influence prospective legislation. We do not need a police lobby in this country.

T In regard to detention before trial, why not adopt the Danish system? Its advantage lies in the application of the terms “detain” and “arrest.” A Danish constable may detain anyone committing an offense and bring him before the desk sergeant. The sergeant has three choices. He may decide that court action is not warranted and let the offender go with a warning. He may decide that court action is necessary and notify the offender when to appear in court. He may, in serious cases, arrest the offender and hold him for court appearance. As there are few serious cases, this means that only a few persons are held overnight pending court appearance.

* A lawyer, writing some time ago in your pages, stated correction could only be achieved through the legal profession, but lawyers, being the greatest beneficiaries of illegal jurisprudence, would never give up the lucrative plums. That the present-day Canadian is a helpless victim of the malpractice of justice, is irrefutable. To infer there is any affinity with the honorable practice of English Common Law, is a despicable joke. To claim that an unjust law cannot be corrected within a reasonable time is spurious. Under English Common Law, except in extreme cases, a citizen’s home cannot be seized for debt; nor can all the contents of his home be sold; nor can the tools of his trade be taken. Here, tax debt can take everything, putting one out on the street regardless of age or health. In the past few years our freedoms have been despoiled.

Case of the gilded Indian

In his article on Peru, Ian Adams speaks of the fountain in the Cuzco plaza, “topped by, of all things, the gilded figure of a North American Indian in a Hollywood pose,” which embarrassed townspeople regard as “an incomprehensible mistake.” It was certainly a mistake, but not incomprehensible — at least, not if you remember that, to a colonial master, all natives look alike. Back when Spain controlled not only Peru but what is now the U.S. southwest as well, officials thought it would be a good idea to erect statues to the native Indian of each of these two areas. Accordingly. a sculptor back in Madrid set to work on a North American Indian, and an Inca. Unfortunately, neither he

nor apparently anybody else knew which lived where. The statues were switched in the mailing. If the local Spanish overseers knew the difference, they also knew better than to question Spain.

Thanks to Maclean’s and Norman DePoe for his article, Why The Knife-Wielders hi the Ottawa Press Gallery Will Soon Start Carving Up Trudeau (Reports). This noisy group should not need to be reminded that their harping criticisms of our elected leaders (of all parties) constitute one of the «most destructive forces in Canada today. The business of a government is to govern — - not to put on a show for the Press Gallery.

On behalf of the Banting Memorial High School, 1 wish to say we are disgusted by remarks made by Marjorie Harris about Alliston, Ont., and our school in her article on Gordon Lightfoot. She remarks that we have 19th-century houses. If she had traveled through all of Alliston she would have seen our modern homes. There are also attacks which were uncalled for, about a few pregnant girls finishing grade 13. All schools have this problem. Her description of our school as a “sterile saltbox” is untrue. Our school is a progressive one, not an aggressive one.

Marjorie Harris replies: “1 was struck by the contrast between the dehumanized high-school building and the beautiful humanistically conceived 19th-century houses nearby, so l made passing reference to it. Alliston is one of the prettiest towns in Ontario because of these fine old houses. / did not mean to imply that grade-13 girls in the high school were pregnant, but reported that at the Lightfoot concert there were knots of newlywed teenagers (comma) pregnant young girls (comma) talk about finishing grade 13 (comma) . . . etc. Nowhere did / say that they were students of Banting Memorial High School.”

In Boil Me No Melting Pots, Dream Me No Dreams, Larry Zolf refers to “the Fenian Raids of the 1880s.” Please tell him to polish up his history. There is no record of raids in the 1880s. My mother’s family, the Freleighs, were victims of the raid on June 7, 1866. A cousin, Captain Philip Luke, mustered his company and drove them back across the Vermont border, about six miles from Pigeon Hill. There was one casualty, a woman.

* Where did Larry Zolf get the idea that for the “dream of pioneering in Palestine” the Zionists “wanted only single men”? On the contrary, the Zionists were anxious to build up a nation and for this purpose men with families were far more desirable. And where did

Zolf dredge up the spelling of r for the Isaac Leib or Itzchak-L\Pet,v Peretz School? No Yiddishist product the dayschool worth his salt would iT this Germanized and archaic spelling ot a Yiddish folk name.

* Larry Zolf’s anti-Americanism is no excuse for his historical inaccuracies. It was, in the main, British regulars who repelled U.S. forces in 1776 and again in 1812. “Our” rejection of slavery was due to laws passed in Westminster in 1833.

In Maclean’s Interviews John Turner, the Justice Minister is quoted as saying, “. . . automobile cases occupy about 80 percent of the time of the superior courts across the country. We may have to consider establishing arbitration boards for automobile cases involving damages below a certain level.” .As a practising lawyer, 1 have always been of the opinion that the best protection (o any client is his eventual recourse to the courts if necessary. The fact of the matter is that roughly 80 or 90 percent of all motor-vehicle accident claims are settled prior to trial. To form arbitration boards for the hearing of certain cases simply eats further into the rights of the individual man. If it is the volume that is provoking the problem, then perhaps there should be an increase in the number of courtrooms and judges available.

In his article, These Men Are Members of Canada’s First Think-Tank . . ., Alexander Ross states that Lake Erie is polluted almost beyond redemption, that it is, in fact, a giant cesspool. Having lived on Long Point Bay most of my life, I have noticed little evidence of pollution. Lakes Ontario and Michigan have more pollution than Erie. I quote from the Report of Commission of Inquiry into Freshwater Fish Marketing (1968): “The fisheries of the lake [Erie! are of vast importance, surpassing in extent those of any of the Great Lakes or of any body of fresh water in the world.” And: “At present, roughly one-quarter of all the fresh-water fish produced in Canada comes from the Canadian half of Lake Frie — 35 million pounds in 1965.” What’s more, if you would check with the Norfolk County Board of Health, which takes samples along the Canadian side, you would find that not one beach has been closed to public swimming.

1 have never been so incensed at an article as I was at Who’s Downgrading Women? Women, by Sheila H. Kieran. She has raised the art of venomous reporting to the highest degree. Even the word “nigger” as used by her is an insult to two groups. Ellen Fairclough, a Kieran target, showed dignity and sincerity in her career. Charlotte Whitton had behind her career as mayor of Ottawa a background of good, solid, public-spirited work; she did many good things for Ottawa, and has hundreds of supporters. Judy LaMarsh did a fine job during Centennial year; she must have something more than Kieran’s malevolent piece of reporting credits to her. No one will deny that women should play a larger part in public life, but this article shows what they are up against. 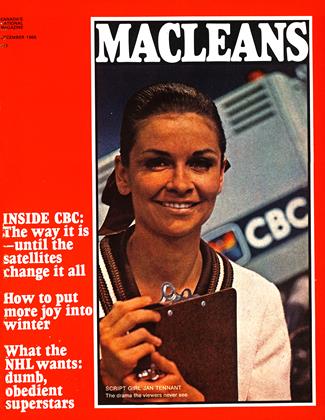