In Toronto, where the bright lights blaze all night but the service stations close at 7 p.m., a fellow and his wife, who were showing a visitor the sights, ran out of gas right on the busiest part of no-parking-anytime Yonge St. The driver took off by taxi for an emergency gas station some blocks distant, while wife and visitor waited and traffic honked its way around them. A motorcycle cop roared up and demanded to know what was going on here. A cop afoot came up. soon to be joined by two cruiser men. and the four of them talked the situation over, increasing the tie-up. Finally, hubby returned with a precious canful, off went the cruiser, in went the gas — but then the foot constable tapped the stranded driver on the arm apologetically. Indicating his motorcycle pal, who was futilely kicking at the starter of his machine, he asked, “Could you give him a splash so we can all get out of here?” 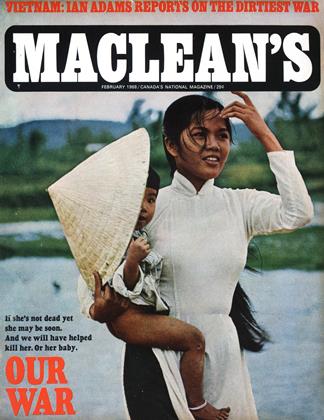