Since images are now more vital than truths or policies, the men jostling for Lester Pearson’s job are in trouble. They’re all honest, dedicated, even brilliant public servants and parliamentarians. But they’re still Canadian politicians, which — imagewise — is synonymous with dull, dull, dull. Frankly, we think these men — all Canadian politicians, for that matter — need help. So we arbitrarily chose four leading Liberals and asked five top image makers and marketing experts how they’d sell these men to the Canadian public. Our experts also nominated their own favorites. At right, the results:

Hellyer laments his reputation for ar-? rogance, but he’s stuck with it so he should use it: subtle shifts in emphasis could make him Mr. Determination. He’s , been a dogged, able servant of Liberal governments and with this team-worke£ image should candidly admit what the voter already suspects—that a nation isH too big for one man to run—and present himself as the ideal chairman of a brilliant team of nation-savers. Hellyer is always in the papers but rarely on TV, which means he’s got what McLuhan calls a “hot, data-laden image.” To coo it he needs lots of TV.

Hellyer’s big drawback is that he must first convince women he is interested in things that matter to them, like housing, prices and education. He has the stigma of masculine militarism, and though women might be flattered by his attention at a party, they wouldn’t want him home for dinner; they’d feel the house would have1* to be spotless and ready for inspection. He should be seen much more with his family, and develop his policies more than^ his image.

Paul Hellyer looks like the teacher who says, “You speak out of turn, boy, andt out you go,” and always seems to be singing in a choir. The church thing, should go, and his daughter — she’s apj doll, about 19 — should be built into aj supergirl skiing in Switzerland, meeting' Beatles and being in at things, like opening The Apple in London. Then kid»^ would figure: “Like daughter, like father.%

Hellyer’s is the face of a willful, confident man. He looks like a younger Diefenbaker. The hair needs a darkening rinse so it shows up more on camera; the chirT' needs shading because he looks jowly and. because it would emphasize his mobile, busy mouth. Couldn’t do anything with • those ears that stick out.

All Hellyer can do is update himself. He. dresses like a swinger of the 1950s, and inevitably looks like an officer in mufti. ■ So wear 1968 mufti: the new “country suit” in dark-brown checks with five-inch * jacket vents, button-down shirts and regimental or club tie. An impeccable Rideau* Club uniform.

Kierans is a name, not a person, and not much of a name at that. He has no reputation and little personal magnetism, so he ‘can’t go the personality or “my record” route. He should try for a Kieran Cult, -where he has no aides, only dedicated ^disciples, who are always more visible

I than he is, always talking about him and his policies and how he can save Con-

1 federation and let all Canada share in the exciting Quebec revolution. The revolution, he says, is for everyone. And he should insult De Gaulle, publicly, and soon.

Eric Kierans put his foot in it from the start by saying Canada can’t afford Medicare, but his biggest hurdle is that he’s unknown. He should make a barnstorming tour of Canada so he can be seen by -people in surroundings that are familiar to them: women, you know, feel more comfortable with a politician who’s vaguely familiar; and since he’s short on sex appeal, Kierans has to make himself . . . well, known.

^.He hasn’t a bad reputation to overcome, and he’s rich which also helps because |. kids admire the rich: their money makes T.them beautiful. Another thing, he’s from ^Quebec and kids love the bilingual thing iLright now: it’s exciting, different from >t,he States. He should hard - sell the \ French-heritage-of-Canada bit; flaunt the ■¡Tfact he’s from Quebec and can tell one . wine from another.

All those wonderful bags and pouches and lines . . . it’s a rugged, doggy face ^with a terrier quality — and the terrier is a very distinguished dog. Except for shading the start of a double chin. I’d leave it alone. He looks like a happy, fulfilled, successful man.

" For a man nobody knows, Kierans dresses too quietly. If he wants to make impact he has to be more flamboyant. He’d best . wear single - breasted suits with shaped waists in muted checks, with gold or ^green shirts and the new 2%-inch ties. That makes an aggressive but not flashy -outfit.

Martin seems to lack humanity — it’s a pity he didn’t once have coffee with someone who had lunch with Gerda Munsinger. To show that a heart beats beneath the cold, boss image, he should speak more slowly, use shorter words, pause before answering questions, talk about his family, show an interest in sport. For TV he needs a setting like Kennedy’s rocking chair. Martin should try his garden, or a woodworking shop: woodworking is clean and creative and men admire skill while women are reassured by it. Anything to show he doesn’t spend his life clipping dividend coupons.

Mr. Martin must liven up his image as an older, dependable, experienced and rather dull man whose star has faded since he lost to Pearson in the last Liberal leadership fight. He’d be hard to promote because women believe only radical action can solve the cost-of-living and housing problems, and Mr. Martin doesn't seem likely to do anything radical.

Paul Martin. Paul Shmartin. Who he?

If I were casting the part of a politician, I’d choose Paul Martin for the role. Then I’d give him heavier spectacles to bring out those magnificent, wise eyes; darken his hair because it’s too salt-and-pepper and make sure all those bags and wrinkles of age and experience came across on camera.

Paul Martin is too old to change, so he should stick to the traditional dark-blue or grey single-breasted suits with soft shoulders, cuffless pants and shirts of unblemished white. That, surely, is the Canadian Look: reassuringly unexceptional and depressingly dull.

Sharp's problems are the name and a face to match, and being Finance Minister, which makes him a sort of national disciplinarian, a bank manager who denies you your fun. A joke-smith should doctor his speeches. He should laugh more to warm up his cold-fish image. He needs to kiss ladies, not babies, so on TV he should be interviewed by a beautiful woman, Jean Templeton perhaps, who should obviously like him. Never talk money, but stay in character and promise nothing but due rewards for hard work. Sharp can’t help looking like a principal who keeps the strap handy.

Mitchell Sharp is a favorite - uncle sort of man: reliable, dependable and anything but dull. Unfortunately, his warmth doesn’t come across on television—and he has one crippling disadvantage: to the average woman he is Mr. Rising Prices, responsible for increasing cost of living, income tax and housing expenses. 1 doubt if there is a way to overcome that not very appealing image.

Sharp is bookkeeperish, and too old to sell as a swinger: you couldn’t get him a gig with The Paupers or anything. Should try for a groovy M. Sharp in striped tie and double-breasted blazer being questioned on After Four by a miniskirt. He’d best stick to issues: the Indian situation, whether to legalize pot, The Pill for single kids and letting people drink before they're old men of 21.

Sharp looks like a more masculine Fred Astaire, and has interesting bone structure. The tip of the nose droops a bit and needs shading, and I’d put a dimple beneath that thin lower lip to make the lip look fuller and get rid of that straight, schoolmasterish chin. Darker eyebrows would emphasize the forehead and the disciplined, sensitive features.

Poor Mitchell Sharp. All he can do is put himself in the hands of a good tailor, and let his wife choose his ties.

John Turner would be easiest to sell. His image needs no change, just management. With that Kcnnedy-clan Phi Beta Kappa cleanliness he’s got the youth vote tied up—after all. he’s the only one of the crop you could imagine out on a Honda. His youthfulness implies action, which covers voters fed up with old leaders. To compensate for his inexperience he should stick to the issues and be photographed around Parliament Hill with his older, more seasoned colleagues.

Whatever men think, women are objective in important matters like government, and so of all Liberals they’d probably favor Sen. David Croll. He’s 67, but seems younger. He doesn’t talk down to women. And he's in tune with our problems: his truth-in-lending legislation, for instance. Strange, though, all the candidates’ wives are unknown. That’s a mistake they’ve all made.

I prefer Turner because he has some Kennedy mystique. He romanced Princess Margaret, and kids would love that. Robert Winters, too. He’s rich, powerful and Establishment. Everyone wants to be that, or marry it. All of them should have sweatshirts, a pop-tune, knock the opposition on the youth thing, like: “Look, Hellyer wears ankle socks yet!” and try for the cover of Mad, or Time.

Pierre Elliott Trudeau . . . now there’s the new look in ugly-beautiful people, like Belmondo. Let the hair grow a bit over the forehead, or give him a hairpiece, and then let well alone. That nose, it’s really excellent. I don’t suppose there’s any big-name Liberal who would look better on camera.

For overall appeal there’s no one to beat Pierre Elliott Trudeau. Fortunately, he’s no dandy because Canadians would never vote for him if he were, but he’s a go-go young intellectual and dresses like it. No man who’s appeared in the House in turtleneck shirts, corduroy suits, the ascot and even sandals needs my advice. 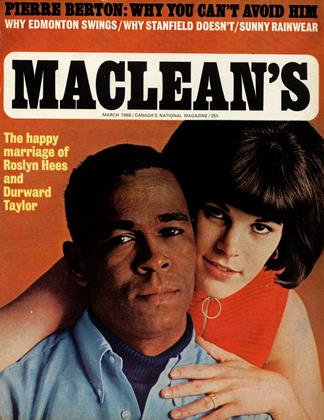