WHEN THE chairman of British Motor Holdings Ltd., Sir George Harriman, urged his firm’s 104,000 employees to “back Britain” after the devaluation crisis, what he had in mind were helpful but modest measures — perhaps the giving up of a tea break or two. Sir George’s letter of appeal made a dandy press release, w’hich found its way to BMH Canada Ltd. and onto the desk of an eager-beaver press agent named Ian Patterson. The result was a flack’s dream come true, a promotion too inspired to ignore.

Patterson, who as a newspaperman had brought Inspector Fabian of Scotland Yard to Toronto to solve a murder (he failed, while circulation soared), now turned his billion-dollar brain to Britain’s plight. Why not buy a Canadian bull and send it over there to build up the herds decimated by foot-and-mouth disease? As Patterson saw it, the whole thing was an allegory. The bull, symbol of the strong young Canada. The depleted herds,

Patterson won the approval of the Canadian subsidiary’s president, Don F. Pocock, and last March flew to Calgary where the 68th annual Purebred Hereford Bull Show was in progress. Patterson wanted nothing but the best: Standard Krishnagar 9X. grand champion of the show, hence Canada’s best Hereford. But the bidding was fierce. A consortium of Montana ranchers ran it up to $10.000 before private industry triumphed. For $10,100, or $6.23 a pound, BMH Canada Ltd. acquired the 1,620-pound two-year-old. It was a record price. Patterson gingerly draped a Union Jack over the bull's back and listened to the delicious sound of popping flashbulbs.

Standard Krishnagar 9X flew to London by Air Canada, which charged $3.972 fare and insisted on a stout

crate and a handler armed with a fire axe. The bull was offered no coffee, tea or milk on board and was not watered for 24 hours before departure time. The trip was uneventful. After being displayed last month at Britain’s prestigious Royal Show — the first Canadian bull so honored — Krishnagar was turned over to the Milk Marketing Board for loan to hardesthit British farmers.

For the bull, to rally round the Union Jack will not necessarily mean to dally round the paddock. Artificial insemination is planned for most of

his 60 services — restricted to the aristocrats of British cowdom — with one real mating a month designed to keep him psychologically in tune. Each service will be worth as much as $2.000 on the bull market, even though he has never bred before. That Krishnagar will prove a splendid sire Tom Drever, a Scottish immigrant and rancher who raised the bull in Olds, Alberta, was tersely confident.

“He has the pedigree and I’m sure he’ll do right,” Drever said last month. JON RUDDY 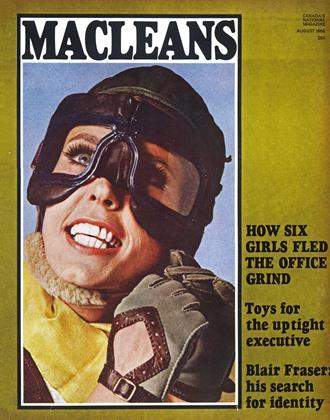