WHILE THE NICOTINE from the first fag of the day still sings along my veins like a gale through telephone wires, and the parched badlands at the root of my tongue yearn for the day’s first downfall of wine, I may seem the wrong man to object to the use of drugs for pleasurable sensations. But I can only generalize from my own experience and my own needs. Tobacco may be habit-forming, probably more so than marijuana, but it seems to have no effect on the personality. It does not alter the nature and kind of the messages received by the brain. Smoking is a palliative which provides a socially acceptable ritual to drain off all nervous twitches and irritating mannerisms. I have no doubt that it is harmful to the practise)but it remains a solitary vice which concerns nobody else.

Drinking appears to be a more dangerous warning of unstable balance, in the mind as well as the legs. Nobody is incapacitated for driving a car, or encouraged to beat his wife, after a packet of 20 cigarettes. Alcohol dissolves the super-ego and stupefies the conscience. It lets slip the dogs of war, and lust and vanity and envy. The cage melts and bends so that the seven deadly sins may escape temporarily for a wild furlough. But its method of operation is to bribe the keeper rather than to confuse the prisoners. Drunkenness starts at the control centre and gradually dissipates as it spreads out to the nerve endings. Almost nobody is as fuzzled as he appears to be. He knows what he is doing physically but comforts himself by imagining that he has established a convincing excuse for the failure to control his actions mentally. Such is the attraction of alcohol over the centuries, the reason it has been discovered, and rediscovered, in every era and every culture. Here is a holiday from responsibility, a Saturday-night saturnalia, which operates within rules understood and accepted by the community. Madness can be measured by the glass. Freedom has a specific gravity. Liberty from the leash is controlled by licensing laws. And a whole superstructure of taste and habit has been erected to contain and limit our desire to stagger amok. The snobbery of wine, the boastfulness of beer, the mystique of the dry martini, the challenge of spirits — all the clubman, pubman routine of sniffing and gargling — is intended to tame and domesticate the demon which steals in the mouth and runs off with the brain.

Hemp, heroin and LSD have no such tradition, at least in the West. Their users buy in the black market and consume in the grey back-streets. They do not know the strength of the product or the value of the dose. Simply as consumers, they have no protection against being swindled by adulterators and cheap jacks. They live in an atmosphere of Prohibition with all its grubby glamour, swayed by rumors

and legends and lies, the prey of fantasists, phony intellectuals and genuine criminals. Shortcuts to sainthood, instant inspiration, hallucinations madeto-measure and the bargain - tourist route to Paradise are promised to them on the installment plan. This fairground world is not one which ap> peals to me. I like to know the quantity and quality of the merchandise I am being offered, and the makers’ guarantee, before I surrender to the intoxication of the hard sell.

But even if these narcotics were 10o’clock - tested, government - stamped and medically recommended, even if I were certain that I could kick the habit at will, I should still reject them as an adjunct of the full and fruitful life. The difference between these drugs and my old companion alcohol, as I understand it, is that they start in their effect at the outskirts and work inward to the citadel. Their aim is to set up a cool, calm, alert centre which processes and sorts the wild, strange, exciting messages from the nerves. The mind becomes a telephone exchange besieged and bewildered by a network of crossed lines from hoaxers, madmen and saboteurs. The end product is a form of synaesthesia, an epidemic of misinformation, in which sounds are felt as smells, sights are apprehended as feelings, emotions blossom into colors and ideas transform themselves into patterns.

This, in my view, in infantilism rather than maturity. Even then, it is rarely achieved and almost never transcribed into any form of communication which can be understood by a nonparticipant. It is anti-art, a refusal to make sense of the environment which dabbles and mucks about with the raw material of the unconscious like a child on the pot.

Man’s most precious possession is his accurate, precise, immediate understanding of the reality around him. To deliberately deprive yourself of trustworthy information is to lose not only the meaning, but the joy, of life. The slogan “turn on, tune in, drop out” is a counsel of despair, the coward’s escape and the solipsist’s elixir. It should be retained only as a thrill for the ancients who have exhausted all other means of entertaining themselves. Physical action, in sex and in travel, in reading and eating, in facing danger and in fulfilling ambition, has uncountable rewards which very few of us even sample in a long lifetime. Before I try an imaginary trip to the shores of heaven and hell, knowing always somewhere deep within me that I am still strapped to my bed, I hope I will have the courage to experience the real threats to my safety and sanity which come from, say, jumping by parachute, escaping from a submarine, climbing a glacier, defying a judge from the dock and a hundred other acts of heroes who live in the present. / By arrangement with the New Statesman

the west.” In each instance the radio transmitters were on, but not actually in use. His theory was that “the radio-frequency field somehow carried our thoughts from one place to another. Sometimes I was the receiver of someone else’s decision.” He said that several colleagues, when questioned, admitted similar experiences. He had contacted Eileen Garrett because he heard ‘'those fellows over there” — the Russians — “are researching this area like mad.” In fact, the Russians are displaying more interest in telepathy and ESP than the U.S. scientific establishment. The military implications oí an interference-free communications system are considerable.

Webster, by now in shirtsleeves, said the sensible way to go about things was to set up a company with a patents engineer and a lawyer on the board. “I want to do it properly or not at all, because if we don’t people will say we’re cranks,” said the engineer. They fenced a little longer, then Webster said he’d talk it over with Eileen Garrett that afternoon, and left to return to New York.

Back at LaGuardia, Webster coiled his lanky frame into a telephone kiosk and emerged, crumpled, 15 minutes later to announce that Mrs. Garrett would grant us immediate audience. He sounded a little like a boy who’d just been invited to meet Bobby Hull.

Queen of the World of Psi

Mrs. Eileen Jeanette Vancho Lyttle Garrett is the reigning Queen of the World of Psi. For more than 50 years she has written books, given readings, gone into trances, and counseled the great and the famous with the aid of her clairvoyance. She has also submitted herself to scores of scientists who have tried, and failed, to prove her a fraud. She is now an old (74 or thereabouts) and slightly roguish lady who, lor all that she doesn’t see too well and can’t walk without discomfort, remains a compelling personality.

Mrs. Garrett received Webster in her Manhattan apartment and, placing a hand on his arm, promptly divined: “You’re going out with a slick fellow tonight.” She told me: “You’ve got money.” I didn’t know who Webster was spending the evening with. I do know I don’t have money. Webster told her the engineer “seems all right, though maybe he hasn’t got enough work to keep his men busy and wants to keep them occupied, but I don’t think so.” Mrs. Garrett said, “The last thing Aidons [Huxley] said to me was, ‘Eileen, that’s where the next breakthrough is coming from — sound.’ ”

Mrs. Garrett then showed Webster a letter from a clergyman in the midwest who quoted his presidency of a Kinsmen’s Club as proof of his sanity, then denounced a fellow minister who, he wrote, was guilty of several local rapes and murders. He knew this was so because he had seen the crimes committed in a dream. “We get ’em all, you know,” said Mrs. Garrett. “All the cranks and liars and nuts as well as the people who’re doing good, sound work.” For my benefit she added, “If this is the first time you’ve been involved with parapsychology, you’ll find it, and some of us, well . . . unusual. But you know,

As we left, she invited Webster to the international parapsychology conference she holds each year at a hotel in St. Paul de Vance in the hills that roll down to Nice and the Mediterranean. He attended last year at

Mrs. Garrett’s invitation, and found himself in the company of physicists, biochemists, biologists, doctors, psychiatrists, psychologists and other men of science. At about the same time he also spent a few days with Joan Grant, wife of a successful psychiatrist, and the author of the book Many Lifetimes. in which she describes her five previous lives in ancient Egypt and Rome and, more recently, in Italy and England. She and her husband have a villa at Collanges, near Limoges.

Webster and his wife Beverley, a Junoesque woman of considerable beauty and a dry and occasionally painful wit, had stayed there while Joan Grant diagnosed that the stiff neck that had troubled Webster most of his life was, in fact, a hangover from two previous incarnations. In one of his lives he was tortured on the rack, she said, and. in the other, more recent life he was hanged from a gibbet. She laid her hands on Webster’s neck and, by some means which she says 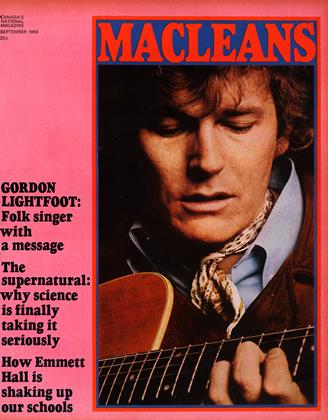